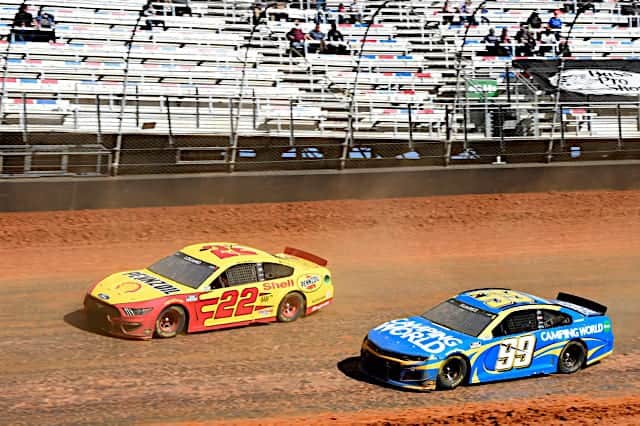 Joey Logano is well-known for his aggressive driving style, and it served him well on Bristol Motor Speedway’s brand-new, albeit temporary, dirt surface, despite his relative inexperience on dirt. Logano used restarts to his advantage, taking the lead from a fast and closing Daniel Suarez in the final stage and holding off hard charging Ricky Stenhouse Jr. and Denny Hamlin to take his first win of 2021 in his fourth-ever dirt race.

Logano looked good on the dirt, which actually raced a bit like Bristol did in the days before it was reconfigured to its current setup. The challenging surface suited his style perfectly, as he worked lapped traffic in the closing laps much more quickly than Hamlin could, and then held Hamlin off one final time on the overtime restart to take the 27th win of his career while Stenhouse edged Hamlin for the runner-up spot.

Speaking of Daniel Suarez, turns out he first climbed into a dirt car … five days before Monday’s rain-delayed race. Yes, you read that right: five days. Knowing that, it was certainly a surprise to see Suarez leading the pack and doing so convincingly, leading much of the second stage and a career-high 58 laps.

Suarez is with upstart Trackhouse Racing in 2021, racing in an alliance with Richard Childress Racing with Germain Racing’s former equipment. He had a surprisingly strong run for much of the day a week ago in Atlanta and came back strong at Bristol. What else does this new team have in the tank?

What … was the weekend the buzz about?

There was a lot of chatter on social media during the weekend that condemned the race before it even ran. Why?

Wave after wave of wet weather moved through the South over the weekend, and while it affected the dirt, it certainly didn’t make the race a failure. With the amount of rain and resultant flooding, NASCAR couldn’t have raced on the concrete surface on Sunday either. They might have gotten the trucks in between showers on Saturday, but that’s about it. And it’s hardly the first time the spring race at Bristol has been hit with a rain delay.

Many people pointed out what could be a viable solution: Swap Bristol’s early date with Sonoma on the schedule. A quick check of the weather showed warm weather in Sonoma over the last few days, and photos of the track showed a vibrant green setting that is long gone by race weekend.

If that’s the norm for Sonoma this time of year, the move makes a lot of sense. Bristol in June may still see an afternoon thunderstorm, but an early summer race in Thunder Valley still works on paper. The tracks in the Southern foothills, Bristol and Martinsville, where the Cup Series will run in two weeks, don’t see warm weather as quickly as the coastal South, so moving them later on the schedule could help eliminate some weather issues and attract more fans as well.

Polesitter and dirt specialist Kyle Larson had to drop to the rear after an engine change in practice, but he wasted no time working his way through the field and into the top 10. Larson’s day was far from uneventful, though, as he was involved in multiple incidents, running without a hood and some bodywork for much of the afternoon, rolling home 29th.

Last week’s winner Ryan Blaney also got caught up in a lap 154 incident, suffering damage to the No. 12. But Blaney was able to rebound, driving his way to finish a solid eighth.  Is he finally putting the bad luck in his rearview?

Defending Cup champ Chase Elliott had a solid Cup dirt debut. He didn’t do anything spectacular, but he didn’t do anything crazy either, and his consistency paid off with a top-10 finish. Elliott finished 10th and rolls into the Easter break 10th in points.

It was dusty, it was slick, and it was entertaining. What set Bristol’s grand experiment apart this year is that the race was more in the drivers’ hands than it appears to be most weeks.

But it was fun.

It wasn’t just the expected names showing strength on Monday — in fact, most of the favorites found trouble on track that hindered them, while unexpected others found a way around. Logano, while a regular contender, isn’t an experienced dirt racer.

And that’s exactly what NASCAR needs. In an era where races have become too predictable despite a field stacked with talent, this weekend’s action on dirt was anything but. Fans in attendance cheered when it was announced midrace that the dirt would return for next spring’s event — a hefty and expensive undertaking for the track as the dirt surface will have to be removed for the playoff race this fall.

The commitment to the race holds promise. While a dedicated dirt track might be a better choice from a track standpoint, the willingness to enter this territory at all after half a century away is promising.

You shouldn’t. It’s an off week. Give NASCAR a rest, already.

Seriously, though, the question as the Cup Series hits the paperclip Martinsville Speedway is whether the grandfather clock will go home with 2021’s eighth different winner.

Logano was the seventh Cup winner in seven weeks at Bristol, and there are plenty of drivers who are capable of and hungry for wins: Hamlin, Kyle Busch, Elliott, Brad Keselowski, Kevin Harvick — the field is stacked with drivers capable of extending the streak.

And just like the unpredictability of Bristol, the array of winners is a good thing for NASCAR and its fans. It speaks to parity, for sure. And it also gives fans of many drivers the chance to enjoy victory — for fans, a favorite driver winning is a great feeling. It’s also great for collectible sales, which is good for the sport too.

This may not go down in history as NASCAR’s most exciting season, or its best … but it’s a fun season to watch. New tracks, different winners — there’s so much to look forward to. And it’s a great feeling.

How … diverse should the schedule get?

Rain aside, the dirt race at Bristol was a success by most counts. A few tweaks to the surface might be in order, but for a first attempt, it went well, especially considering that inches of rain fell over the course of the weekend.

But does that mean NASCAR should be running to kiss and make up with the snubbed Tony Stewart to add a date at Eldora, or look at another dirt track to add to the Cup schedule?

That doesn’t get a resounding yes. A resounding maybe is more like it. In order to really make wholesale changes to the schedule, NASCAR needs to move on from its own International Speedway Corporation and Speedway Motorsports Inc., who host the vast majority of events on the Cup schedule. SMI will likely sue them if they dare take a date, and ISC’s holdings include a track with a casino they’re banking on for added value, so that’s iffy at best.

Ideally, the schedule should include short tracks, road courses, intermediates and superspeedways, as it does now, but in a better balance.  What about dirt? One race on any style of track seems like one too few (or one too many), depending on how much preparation the cars need (and that will largely depend on the next generation car debuting next year) — a second race would make the prep more worthwhile. The addition of road courses is great. Short tracks should be next, but the challenge there is mainly the tracks themselves; most not on the schedule now would need to add SAFER barriers, something NASCAR should not compromise on (but should be willing to give grants or loans to finance). The reconfiguration of Fontana may provide another.

Overall, the more balanced and diverse the schedule is, the better. At the same time, the season is so long that adding more races is prohibitive to say the least. But if dirt racing is going to be a long-term investment, two races a year seems right — separate from two concrete races at Bristol because that’s good racing too. The sport is ripe for these changes.

One final thought on tracks, and maybe it’s way off base. But if I’m SMI and I want to keep NASCAR on dirt at my tracks … the temporary surface at Bristol is expensive to put in and remove every year. Also, at this point, North Wilkesboro has sat far too long for the existing surface to be viable without extensive work anyway. So … what if … And yes, the whole grandstand would have to be razed and rebuilt as well, and parking and infrastructure would be an issue in today’s NASCAR.  But what if …

All in all. A great race weekend. The idea of Dirt at North Wilkesboro would be a perfect race. Make that race the true “throwback” weekend. You know that track would sell out, infrastructure needs serious updates but that track would bring in huge money into a struggling town. I’m sure the locals would love NASCAR to come back. Also it’s cheaper than a repave.

I would love to see that too. But as they say, “You can wish in one hand & take a dump in the other & see which one fills up faster.”

Amy has a strange take on the what is “fun.” No strategy. Very little passing for the lead. Pit stops that were long enough for the drivers to shower, change uniforms, and have a snack while the rest of us were able to go back to working without missing a thing. A waste of time, but NASCAR being NASCAR, they will only double down on their mistake. How about mud wrestling among the drivers’ wives and girlfriends during the extended pit stops? That would get higher ratings. I hear Ashley Anderson is quite the hottie.

I am not sure about how “great” the race was but it was entertaining. Of course, in sports there are things more important than being entertaining.
So we ignore the fact that they could only run 25 miles? How come it’s OK here but everyone still is upset about Indy in 2008 when they could only run 10 laps (also 25 miles)?
No mention of changing the double file restart midway through the race? That wasn’t cool.

I am all for fun but this is supposed to be a big time, serious sport. I can’t say I have ever seen other major sports change rules like that during an event. If anyone can think of such an instance…. please share.

Watched the race from beginning to end which doesn’t happen often.Usually DVR most races. Decided to watch live mostly out of curiosity and found it wasn’t too bad. If I had a choice I would watch a dirt race at Bristol anytime over a cookie cutter mile and a half track. At least we didn’t hear too much about that horrible word “clean air”with all the dust. I believe it was Bowyer, during the wrap up, who said not everyone was going to like it. Although I thought there would be a lot more grumbling then what I’ve see so far.

i just find it interesting in the lack of comments on articles here about the race.

there wasn’t clean air anywhere. I flipped on when I got home but the dust cloud reminded me of pigpen from Charlie Brown.