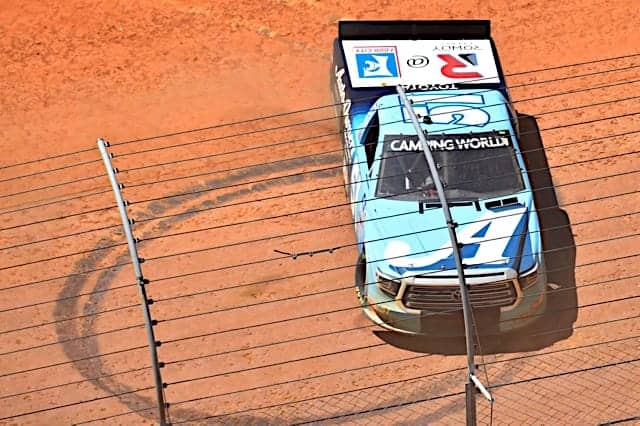 In a Nutshell: Martin Truex Jr. made his way to the front early, swept both stages and cruised to victory in the Pinty’s Truck Race on Dirt in Bristol on Monday (March 29). The Cup Series driver jumped in Kyle Busch Motorsports’ No. 51 Toyota Tundra for his first Camping World Truck Series race in nearly 15 years, starting — appropriately — 15th and leading 105 total circuits in a caution-filled, chaotic event.

A total of 12 interruptions slowed the race, with nearly 40% of the distance run under caution. With the win, Truex became the 36th driver in NASCAR history to score a win in each of the sport’s top three divisions. The Monday afternoon race was postponed nearly two full days due to poor track conditions on Saturday, when the series was supposed to have heat races and the main event, and then again from its rescheduled Sunday night slot.

“It’s unbelievable, really,” Truex said after doing a burnout that, rather than billowing smoke, kicked up a small yet violent sandstorm. “I guess they had to put dirt on Bristol to get me back to victory lane here. It’s been a long time. That was a blast, I’m still really surprised.

“I wanted to run this race so I could get more experience for the Cup car,” he added. “We got out there in practice and it just felt really good and I was having a lot of fun, so I just kept trying to work with the guys and tell them what I needed … that was a blast. I kept thinking, ‘What’s gonna happen next? Am I gonna get a flat tire or something stupid?’ This [No.] 51 is pretty much used to being in victory lane, so a lot of pressure there, but glad we could get it done.”

It’s hard to pinpoint a driver that sticks out as the best of the rest, but runner-up Ben Rhodes is the most likely qualifier here. He started closing, if only slightly, on Truex in the closing laps, but couldn’t make up more than a few tenths as Truex won by 1.149 seconds.

Rhodes did cut the gap between himself and points leader John Hunter Nemechek significantly and led three laps during the race. Also out front was Sheldon Creed, who went to the point early and led from the second lap all the way to lap 39, but surrendered to Truex before the end of stage one and continued to slide back into the clutches of the field. Creed finished 16th.

JHN is not impressed … pic.twitter.com/zdG3lQ0OA7

Point report: Despite Nemecheck’s early crash and Rhodes’ strong run, the former remains atop the points standings; Rhodes did gain 41 points to cut Nemechek’s advantage to six. The top six in the standings remained the same, while Self leapfrogged four spots into 10th and Todd Gilliland jumped three to ninth. Losing ground were Johnny Sauter and Hocevar, both of whom fell out of the top 10.

You don't hear this every day: The average speed of today's truck race was 41.096 mph.

Great start to the day! Thanks @AutoOwnersIns @KBMteam @KyleBusch for letting me have some fun today. Now lets try again in the Cup car. #TeamToyota pic.twitter.com/TbRPaQuOmH

Solid day, started 13th finished 4th, little disappointed at the end we couldn’t get more but that’s racing, great adjustments on our pit stops to keep up with the track, super proud of everyone @Team_FRM we need to keep this up! Thank you @SpeedcoPM @Ford pic.twitter.com/2iBwINg7c2

Up next: The Truck Series has a three-week break in-between Bristol and their lone race of April. That will be the ToyotaCare 250 at Richmond Raceway, where the Trucks returned to last fall after 15 years away. Grant Enfinger is the defending winner for this year’s event, which is set for Saturday, April 17 at 1:30 p.m. ET with coverage on FS1.