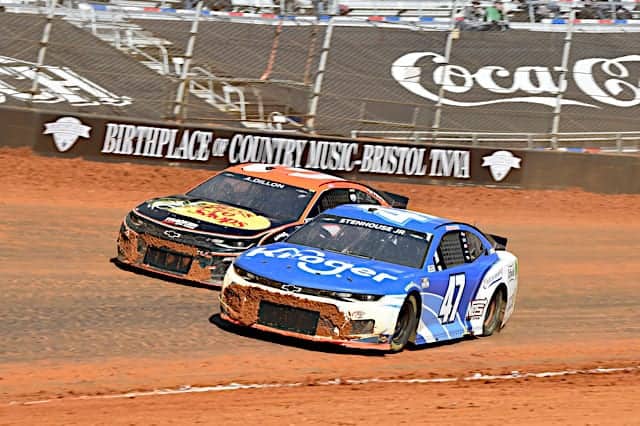 Stenhouse is a dirt track ace with sprint car experience as both a driver and owner. He even spent time working with Speedway Motorsports, Inc.’s Steve Swift late Sunday night to ensure track preparation was not only running smoothly, but being conducted in a way that would promote good racing for the NASCAR Cup Series cars which hadn’t touched dirt (intentionally) for the last 51 years.

So it should come as no surprise that the ninth-year series veteran turned in an outstanding performance on the high banks of Bristol in the series’ return to its dirty grassroots.

“Man, we had a blast,” Stenhouse said. “At the start of the race, I was terrible with the green race track and a little bit of moisture in it. But as it blew off, we got back to where we were in practice and felt really good with it. A good way to go into the off week.”

Stenhouse appeared to get better as the race progressed, something that wasn’t lost on him. If it weren’t for scheduled competition cautions every 50 laps — including stage breaks at laps 100 and 200 — he believed he had a car capable of doing even more on the long run.

The second-place result is fantastic for the JTG-Daugherty program, but if you’ve been paying attention, you know this race wasn’t the first in which Stenhouse has made noise.

Stenhouse has yet to finish outside the top 20 through seven races this season and sits 14th in points following Bristol. His worst finish so far is 18th, twice, both at Daytona — once in the Daytona 500 and once at the road course. The following weeks have been flush with consistency thanks to results of 13th at Homestead-Miami, 11th at Las Vegas Motor and consecutive 12th-place finishes at Phoenix and Atlanta respectively.

At 33 years old, Stenhouse said the key change in the offseason was the team’s mindset: Take what the car gives you that week and carry on. That shift was critical after eight DNFs in 2020 and just two top 20s in the first eight races of last season.

“We really focused on being more consistent week in and week out,” Stenhouse said. “We had some really high moments last year and we had some really low moments. We’re just trying to even things out and take the speed of our racecars and make sure we execute when we’re at the racetrack and in the shop and just being prepared.

Stenhouse, who some forget won consecutive Xfinity Series titles in 2011-12, has taken ownership for how he approaches each race weekend

“That’s starting with me, the things I do behind the wheel, the things I do off the racetrack preparing, going into a weekend and just getting that mindset going into each race that it’s one race at a time,” he said. “We didn’t get off to the hottest start. We struggled a little bit at the [Daytona] 500, had a couple mistakes that cost us at the [Daytona International Speedway] road course, but really other than that, we’ve stuck to our game plan and done everything that we’ve wanted to do and accomplish every week.”

Consistency can fix a lot of things, particularly when that consistency means stringing together strong runs over mediocre ones. It also helps reduce some of the pressure, even when Stenhouse was highlighted as a potential favorite entering Bristol thanks to his dirt background.

“I felt like I was going to be comfortable on the racetrack, but I felt like these are the best drivers out there,” Stenhouse said. “They were going to adapt and their teams were going to adapt and bring good race cars as well, so I didn’t want to put too much emphasis on, ‘Hey, we have to go win.’ “We methodically worked our way throughout this race of getting our race car better, not freaking out early in the race knowing that the track conditions were going to change and probably going to come around [to] the balance of our race car.

“We did that, got our first top five [and] top 10 of the year and trying to keep that momentum going into an off-weekend and start back fresh when we get going again.”

The Cup Series returns from an Easter off-weekend at Martinsville Speedway on Saturday, April 10.