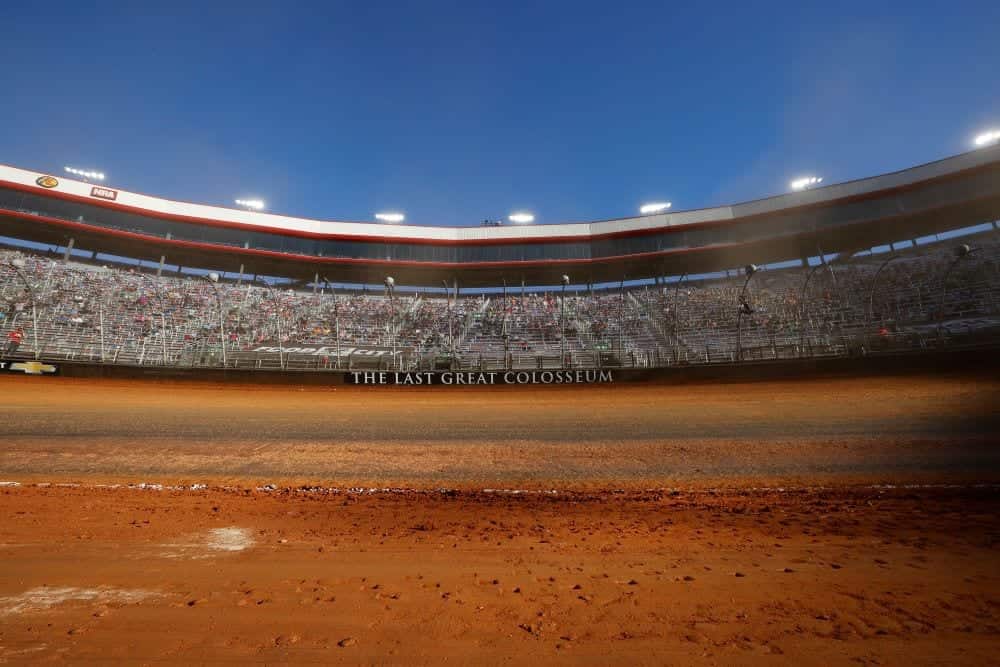 The Bristol Dirt Race. There’s no doubt that NASCAR’s first dirt race since 1970 got people’s attention.

Something else that got people’s attention was the announcement during Monday’s race (March 29) that the Bristol Dirt Race would return in 2022. It came as a surprise to some for many reasons, including the challenges NASCAR faced over the weekend. Some challenges that may not be fixed in the years ahead.

However, the race was still entertaining and still served its purpose. This led us to ask: Did NASCAR make the right decision in bringing back the Bristol Dirt Race in 2022? Brad Harrison and Clayton Caldwell examine that topic.

This Weekend Was a Success

Before the green flag was dropped … even if it was a day later than planned, the return of NASCAR’s top division to dirt was a success and, yes, deserving of a return of Bristol Motor Speedway’s dirt surface in 2022.

NASCAR and its fans won before the race began. The sport entered the national conversation through the weekend with the excitement of Bristol, and that was during March Madness. That speaks volumes.

In a time when Bristol’s spring race has been plagued in recent years by large swaths of the grandstands disguised as empty seats, the event became must-see TV in the lead up … and the number of fans showing up on Monday reflected that.

Insanity is often defined as doing the same thing repeatedly and expecting different results. Speedway Motorsports Inc., refused to be insane when they turned the October race at Charlotte Motor Speedway from an oval race to a ROVAL race and may have done the same thing at Bristol.

Regardless, the team at Bristol saw a way to mix things up. Even it failed miserably, this weekend’s events warranted another try in 2022 for one sole reason – that it saw a way to do something out of the ordinary and make it even better.

The on-track racing product didn’t hurt, either. Even if the Camping World Truck Series event turned into a patented Martin Truex Jr., walkover, the on-track racing was anything short of monotone. Heck, it even gave us a good old-fashioned Bristol temper-flare courtesy of John Hunter Nemechek.

As for the NASCAR Cup Series race, the dirt racing talent lending itself to giving some not-so-usual suspects a chance to run stronger than typically seen added to what was a fun race to watch, as well.

Was Monday’s race perfect? No. Few races are. But Bristol pulled off a rarity – a racing product that a majority of drivers and paying fans got a lot of enjoyment out of. -Brad Harrison

The Bristol dirt weekend was something that many fans, drivers and people in the NASCAR industry had anticipated for a long time. While the race was completed, there were more than a few hiccups that took place, and I think we’d be better off with a race at an actual dirt track.

One of the major issues we experienced at Bristol were track conditions. At times, the track conditions were unacceptable. Rain pushed the races until Monday but it was Saturday where Bristol got its most attention.

In a desperate attempt to get some on track action on Saturday, NASCAR tried to run the heat races for the Truck races but instead, caused a major embarrassment. The trucks ran just two laps before dirt was caked to the windshield and grilles. It was so bad that the race had to be stopped so drivers could see and trucks didn’t overheat due to lack of air going to the engine. More rain came, and it postponed the event until Monday.

Sure, rain can happen at a local dirt track, we’ve seen that numerous times. However, the fact that the track isn’t a true dirt surface hurt the track’s drying ability. Instead of the water getting sucked into the ground, it stayed on the dirt because it was on top of concrete. A natural dirt surface could have made a race like they tried to pull off on Saturday possible. While dealing with mother nature is unpredictable, a better outcome would be to run it elsewhere in case it comes again.

Another reason to run it elsewhere is how dusty the track was during the Cup race. A 250-lap race for the Cup Series, which was preceded by the 150-lap Truck event, seemed to really put the track in rough shape. There was about a two-hour break in between the races, which was used for track prep, but it wasn’t enough. The first part of the race went off without much dust, but the second part of the race was bad.

So bad in fact that NASCAR had to resort to single-file restarts to help with the dust. Single-file restarts are not uncommon in dirt racing, but this is again a problem of not being a true dirt track. The condition of the track and the fact that it plays different than a natural dirt surface makes prepping the track extremely difficult. The dusty conditions were proof of that.

The other thing that was unacceptable was the tire at Bristol. Goodyear brought the same tire used at Eldora Speedway by Trucks to Bristol. The problem is that the Cup cars are heavier and faster than the trucks. This caused major issues with the tire compound.

Tires were cording super early in a run, and NASCAR had to throw two additional competition cautions for teams so they could remove the tires after 50-lap runs. This was to try and prevent having massive tire failures. The unfortunate part about that was it took any interest away from long green-flag runs, and it also took away any tire management. Drivers could go as hard as they wanted knowing a caution was coming up in 50 laps.

The reason for the tire compound being the same at Bristol as it was at Eldora is because there is only so much time to test a tire on the dirt at Bristol. With Bristol being a concrete track most of the time, testing a dirt tire on there would have to take place only when Bristol has dirt on it, which was a short amount of time. There’s a ton of prep that goes into creating the dirt surface at Bristol. Asking Goodyear to do a tire test and create a tire and distribute them to every team in the Cup Series in such a short amount of time would be virtually impossible.

If NASCAR were to go to a different dirt track, they’d have all year to test a tire there like a normal racetrack. They could go to another dirt track and do some tire testing but not all of them have the high banks at Bristol and run the speeds Bristol has. Going to another dirt track in the country would be a better show with a much better tire.

Finally, while adding a dirt track race creates a different dynamic to the Cup schedule that comes at a cost for the race fan. The schedule was already down to only six short track races and is now down to five. Adding a dirt race at the expense of a short track is not ideal. Fans need to know that the decision to go to Bristol instead of a Knoxville Speedway or even Eldora had a lot to do with business. SMI is not going to have one less date on the schedule. Adding it to Bristol made perfect sense for SMI but for this fan, it would be better at a different dirt track at the expense of a 1.5-mile track. -Clayton Caldwell

Dirt racing at Bristol was just another nascar gimmick. All we had was a 5 stage race. No fun watching 50 lap sprints. Go to Eldora or Knoxville or any of the many dirt tracks available.

Well said. Another gimmick is what Nascar has become. There is no more real racing.

If you are going to run dirt, do it the way they do. Not a 250 lap race, do qualifying, run heat races and then a main. If you don’t qualify, you go home, simple as that. That way the track doesn’t get so beat up by so many cars. Oh, and by the way, find a real dirt track, not some made up track on concrete. The racing would be better but NASCAR doesn’t understand that part of it. Silly NASCAR.

Bob, 50 lap sprints? Isn’t that the distance of most Main Features. Bristol had 5 of them! Just enjoy!

I enjoyed the Bristol dirt racing. There were cars in the hunt that don’t usually run competitively such as the #47 & #99. There was plenty of side-by-side racing and a fair amount of passing in the field (e.g.: Kyle Larson went from #38th to #5th before getting caught up in Bell’s spin). While Truex dominated early, he obviously didn’t win the race. And the Bristol boo-birds had a chance to sing their special greetings to the winner (and their “favorite” driver), the notorious Joey Logano. It’s all-good to me!

Mother Nature had it in for NASCAR and SMI during the race weekend with the torrential rains. The fact that they were able to pull off both shows at all was a credit to their persistence and hard work. If they have better weather next Spring, the races will go just fine.

I agree, I loved the Bristol dirt race AND the length. Plus, Clayton, just because it WAS dirt doesn’t mean Bristol was longer, so it is still a short track race. Kudos to NASCAR. I grow very tired of reading what fair-weather fans say because the racing now is just as good (according to aggregate sites) in terms of passing as it EVER HAS BEEN. Just enjoy the sport and stop tearing it down because misinformation is evil.

Someone needs to define “real racing” to me . And someone please explain how someone that hates NASCAR so much continually reads and comments on the subject.