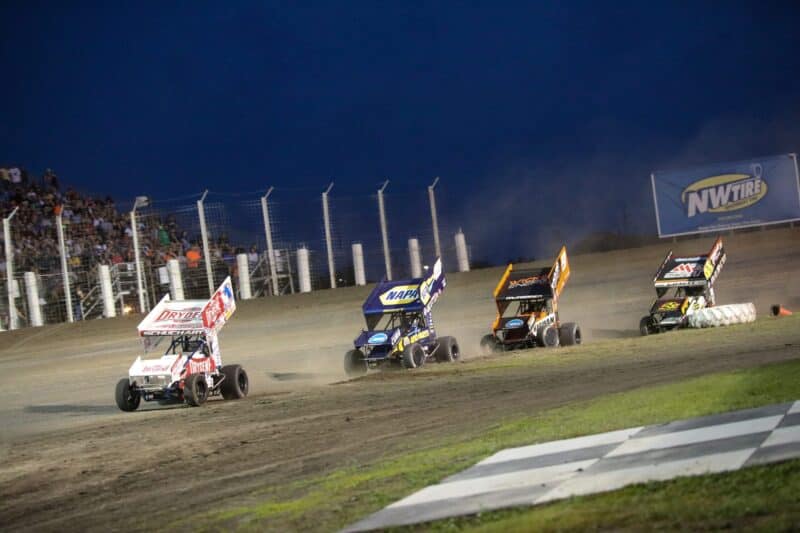 Thanks to NASCAR’s Bristol Dirt Race being moved to Monday, I didn’t have to make an excuse not to sneak a peek. My 9-5 took care of that for me. That being said, as I do multiple times seven days a week, I was sneaking peeks at my dirt Twitter list that continually has 500-plus active dirt racers spouting off about the sport (and a bunch of other nonsense I normally don’t want to hear about).

If there was a theme to be taken away from their appraisal of Monday’s (March 29) race, it was just like any other first time; messy ups and downs.

Messy ups and downs are what dirt racers and fans alike navigate every single weekend as part of their sport. Some of that will always be part of a sport that relies on, well, dirt, to contest itself. Dirt racing will always be subject to weather in a way that asphalt will not. If it’s cold, dirt becomes hard to work. If the dirt becomes waterlogged, nature has to be allowed to take its course in drying it out. The IMCA Frostbuster at Independence Motor Speedway in Iowa had a completely valid challenge that forced them to cancel their race scheduled for April 1.

The 2021 Frostbuster is cancelled due to cold and wind, we drained waters out of pumps and water trucks and still had…

And given that dirt is dirty, there’s often no incentive for said tracks to spend money on creature comforts. Even a perfectly groomed dirt track is going to fling dust and debris at paying patrons, as well as the structures they’re watching from, for the entirety of a racing program.

Author’s Note: These are not complaints. That rough, ragged edge is what makes our sport compelling. Sterile is good for hospitals, not houses of speed.

That’s not to say dirt racing can’t be better at some things. With all the free technology that is out there in terms of social media and shared documents, that it is damn near impossible in 2021 to find race results, payouts, even event schedules for literally hundreds of active tracks in the United States is a glaring shortcoming. As I’ve written numerous times in this column, getting a handle on racing programs that often run 6-8 hours a night is a realistic goal that should be achieved. And sprint cars should all be equipped with starters. But I digress …

I wasn’t expecting Tuesday night’s Frostbuster race at the Stuart Speedway up in frosty Iowa to be fodder for a column, but it ended up being so on several fronts. For one, the track has an updated Facebook page with photos of their winners and full race results easily accessible the morning after. With the race program confined to four classes of cars, Tuesday night’s full slate of features was completed in a little over three hours, perfect length for a weekday event.

And then there’s the racing itself. The track surface held up all night long with two working grooves, and race fans that braved the cold were treated to one of the best finishes racing in 2021 has seen anywhere when Oskaloosa, Iowa’s Cayden Carter executed a textbook (and squeaky clean) slide job through turns 3 and 4 to steal the IMCA modified feature win on the last lap.

Those of us subscribed to RaceXR+ and wanting to make the most of our $34.95 subscription now that the Bristol Dirt Nationals are in the rearview mirror also got to see this finish play out in living rooms (hopefully) warmer than Stuart’s grandstands.

It was a treat to get to see such a finish live on a Tuesday night. Dirt racing is more accessible in 2021 than it ever has been, and that’s a major asset to the sport.

If there was anything lacking on Tuesday night, it was information. Viewers of Tuesday night’s race did not have the aid of any graphics to spell out starting lineups, running order during races or results after the checkered flag flew. Plus, with the only running audio coming from the track’s PA announcer, those lacking hometown familiarity with the faces of Iowa’s IMCA racing scene either needed to do what I was doing, watching said race with a laptop and a notepad, or hoping they could figure out from the track announcer’s cadence which cars he was actually referring to on track.

This is not meant to be an indictment. There was nothing wrong with Stuart’s PA announcer, and even at $34.95 a month, I’m not expecting/demanding RaceXR+ to come up with a FOX Sports-esque telestrater. But there does need to be some recognition here that for streaming services to actually grow the sport, the product has to go beyond simply putting live images on the screen. A lineup that names drivers and where they are from, a running order in a bar at the top of the screen that reflects what’s coming off the racecars’ transponders and accessibility goes to a whole other level.

With racing like Tuesday night’s at Stuart, the on-track product will sell itself. This meal tastes good, it just needs a little presentation. And I mean a little. Like I said earlier, a little mess is nothing to fear in dirt racing.

And if what is going on out in Arizona is any indication, there is something to fear about getting too into the weeds in telling the story. Scanning through Facebook to bring you fine readers something to roll your eyes at this week, I stumbled across a briar patch of a thread related to the recently re-opened Canyon Speedway Park in Peoria.

Hello to all of our Canyon drivers, fans and staff! We wanted to make a post to address the recent events that took…

Wading through what was 179 comments at the time I’m writing this piece, the controversy as I can surmise was this: Ben Thrasher, a well-known motorsports photographer in Arizona, was prevented by CSP from shooting pictures in the track infield this past weekend, an apparent departure from the regime of the track’s previous promoter and a decision Thrasher (and a number of CSP fans it seems) took offense to, and took said offense to social media.

Truthfully, this episode as spelled out through Peoria’s racing commentariat brings forward a lot of raw issues that could prove red meat for those looking for an argument. Though I will openly admit that I find Thrasher’s tone and conduct on social media in this episode to be thoroughly detrimental both to his person and to those of us that work in racing media (yes, the show can and will go on without us. No, we are not the story), I also agree with his assessment that it’s not in the best interest of any racetrack to pick and choose exclusive media. And when it comes to photography at a dirt track, it’s damn near impossible to take meaningful photography without being in the infield to capture sliding racecars.

Having said that, I don’t dispute a lot of CSP’s thinking, especially when it comes to risk and insurance requirements. Dirt racing ain’t NASCAR, and the infields of most dirt tracks are far more hazardous than a NASCAR garage ever will be. I wrote a few weeks back about how scary it was to see Hudson O’Neal pulling into a live work area at Florence Speedway only to view a mother picking a small child hurriedly out of the way of a super late model. Rewind back to the Gobbler at Cochran Motor Speedway a few weeks back, where a wreck during a stock car heat literally knocked the concrete frontstretch wall backwards into spectators. And just Tuesday night, a rogue modified avoiding a wreck at Stuart drove all the way through the track infield at speed.

Given that 2021 has already seen a death in a track infield thanks to rogue behavior and that CSP has already had to cancel several race events in 2021 due to strict COVID-19 restrictions, and there’s a lot of credibility to the story and rationale to limit persons in an infield.

Let’s keep some perspective, I’m a commentator taking this story at the face value of social media that was 2,200 miles away from the track when it happened. But it’s quite the image for Arizona dirt racing to see this type of fervent arguing over nonsense mere days away from the Arizona Speedway, a nationally renown facility, staging its last race ever this weekend so that the land can make way for planned development. Mind you, Arizona Speedway was built in response to the closure of Manzanita Speedway, which disappeared in 2009 because development got too close and the noise got to be too much.

Messy ups and downs? Try missing the forest for the trees. Or maybe the canyons for the cacti is more appropriate in this case.

It’s easy to blow this kind of stuff off as social media bluster. NASCAR gets away with it all the time with its fans.

But dirt racers and their fans aren’t like NASCAR brethren. Most drivers run where the money takes them rather than a series schedule. Many fans cherrypick the shows they want to see as well. Being a dirt fan by definition means knowing there are multiple shows to see, and given the number of dirt tracks that have closed over the years without being told to by local authorities, they have proven willing and able to pick up stakes and leave town if they don’t like what’s going on.

That’s the messy ups and downs of the sport becoming more accessible. Tuesday night at Stuart was a high. Facebook farming Wednesday night was a real downer.

So much so that I left the CSP page without having any idea who actually won the weekend’s races.