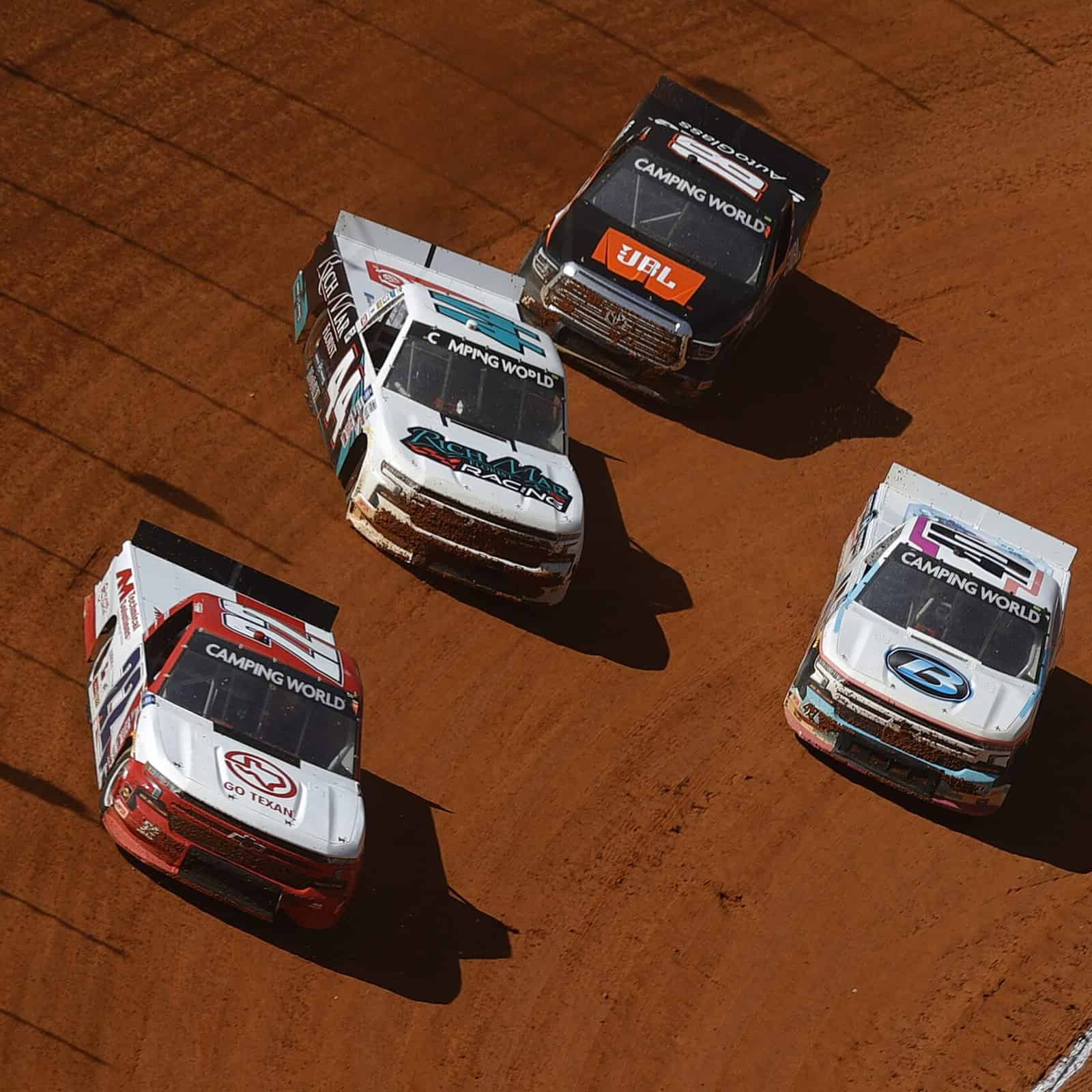 It seems like it was just yesterday when the green flag dropped on the 2021 Camping World Truck Series season, but here we are headed into the Easter off weekend with five of 22 races already run and only 10 more before the playoff field is set.

Bristol Dirt Should Be Considered a Success

Hear me out here. Plenty was said following the failed start of Saturday’s (March 27) qualifying races where everyone except the leader found their trucks and windshields caked in so much mud that it made it impossible for them to see. Many were quick to bash NASCAR about putting dirt on the concrete oval and deemed the idea a failure before actually giving it a real chance.

Well you see, what had happened was… pic.twitter.com/6lBEvvNIlj

Fast forward to Monday (March 29) when Mother Nature finally backed off and allowed track prep crews to get the surface in a raceable condition, and it didn’t disappoint. You had all the makings of a great race: beating, banging, tempers flaring, all of it.

Of course, that’s not to say everything was perfect. In fact, the weather was probably the biggest disappointment of the weekend. It left us wondering what may have been different if the qualifying races had run. What if the race was run under the lights instead of during the daytime? Would that have decreased how much rubber was laid down on the track? Could it have changed the way the trucks handled?

But when you take a step back and look at the big picture. From the engineering that was put together to even make a dirt surface that would handle the weight of the trucks and NASCAR Cup Series cars to the weather problems faced, it was still an overall success. And huge kudos need to go out to Bristol and its entire track prep team for being able to put together a raceable surface despite the deluge the area faced leading up to and throughout the weekend.

.@JamieLittleTV and @ReganSmith cover the current conditions in Bristol, TN as inclement weather moves through the region. Parts of the track property outside are currently flooded. pic.twitter.com/EV83DcVSPm

If nothing else, it was a welcome return to dirt racing on the schedule after losing the trip to Eldora Speedway last season due to the COVID-19 pandemic. Though the Truck Series hasn’t officially announced it’s returning to Bristol dirt for 2022, NASCAR and the track revealed the Cup Series will head there next season, making it a pretty sure bet Trucks will be running there again too.

Will John Hunter Nemechek vs. Matt Crafton Carry Out of Bristol?

When you’re racing at Bristol, it’s almost inevitable that someone will leave angry with another competitor, and that was the case with the dirt race. This time it was John Hunter Nemechek who got tagged and spun by Matt Crafton. To make matters worse, Derek Kraus couldn’t get himself stopped and slammed right into the No. 4 Toyota facing the wrong way on the track, ending Nemechek’s day and his string of top-10 finishes to start the season.

John Hunter Nemechek goes around at Bristol with some help from Matt Crafton and Derek Kraus slams into the No. 4 truck. pic.twitter.com/Tsa3SkJoPI

Though the actual damage wasn’t Crafton’s doing, Nemechek displayed his displeasure with the spin not once, but twice. After all, if he hadn’t been spun, that wreck may not have happened.

Bows are a big deal when you drive for Rowdy. pic.twitter.com/4KX5yrM8sO

And as if being out of the race wasn’t bad enough, a track clean up truck slid on the surface and did even more damage to the No. 4.

“Matt just flat out ran over me, so that one will be in the memory bank,” Nemechek told FOX Sports from the infield care center. “We were fine, didn’t hit anything, and then there toward the end of that whole deal, the No. 19 (Kraus) – I guess him and his spotter both need a pair of glasses, so I’ll have those for him at Richmond [Raceway].”

Any time there’s any type of conflict between drivers in NASCAR, the immediate thought is whether there’s a budding rivalry or not. It’s hard to tell whether Nemechek was more upset with Crafton or Kraus in that situation since both contributed to his day ending. But given that Nemechek took the time to wave at Crafton and then bow at his pit box, followed by members of the No. 88 team visiting the No. 4 hauler after the race, if anything comes out of it, it’ll be between Nemechek and Crafton.

With that said, there’s time between now and the next time the Truck Series is on track. We have the Easter off weekend coming up, along with another weekend off while the NASCAR Xfinity and Cup series head to Martinsville Speedway. So by the time they get back on track at Richmond in a little over two weeks, this incident could easily be in the rearview mirror for both drivers. But perhaps more importantly, Nemechek’s daughter will be here by then, and there’s no telling how his mindset changes between now and then after she arrives.

Grant Enfinger Not Eligible for Championship

When it comes to setting the playoff field, Grant Enfinger currently sits eighth in the standings, despite being forced to the sidelines for the Daytona International Speedway road course due to lack of funding. His story has been told this season and, unfortunately, money talks in this series, leaving Enfinger with just a part-time schedule.

It’s mind-blowing that a driver who was in the Championship 4 last season simply can’t run for the title this year simply because he sat out for the second race of the season. Obviously, Enfinger doesn’t currently have a full-time ride for the rest of the schedule, but hypothetically, if he were to run the remainder of the schedule, I’m left wondering what NASCAR would do when it came to considering a waiver.

But when it comes to a waiver, the sanctioning body faces a slippery slope. After all, if the precedent is set that a driver can miss a race for sponsorship reasons, what’s to stop a team trying to save some cash from doing the same thing in the future? It’s especially concerning since a team like GMS Racing, which has struggled to find sponsorship for the defending champ but definitely has the resources to make a run at the playoffs on points or a single trip to victory lane.

On the flip side of that, NASCAR put itself in this box by giving Johnny Sauter a waiver in 2019 after he was parked at Iowa Speedway and later suspended from the race at World Wide Technology Raceway at Gateway the following week. It amounted to no more than a slap on the wrist and a weekend where Sauter got to race elsewhere and still turned around eligible to make the playoffs.

NASCAR has put itself in a box that I don’t envy. There are certainly arguments both for and against giving Enfinger a waiver, and at this point, I’m sure ThorSport Racing’s bigger focus is on keeping the No. 98 Toyota that he shares with Christian Eckes in a position to race for the owner’s championship.

As of a few weeks ago following the Las Vegas Motor Speedway race where Enfinger ran Codie Rohrbaugh‘s truck, Enfinger hadn’t broached the subject of running for another team in the Truck Series to help fill out his 2021 schedule. But you can bet he’ll be finding somewhere to race even if it’s not in the Truck Series.

“If we can’t get it done at ThorSport – obviously everybody’s goal is to do more at ThorSport,” Enfinger said. “I just know I don’t want to stay at the house; I want to be racing something. That’s really all it boils down to.”

Really bummed that we didn’t get a shot to race in with the 62! But we WILL be back! Thanks to the entire HFR team for the badass truck and all of the hard work.
Today is Daddy’s day!! Let’s go 52 & 77!
@stewartfriesenracing @halmarracing @spiremotorsports @nascar @bristol pic.twitter.com/FUHNztEv62