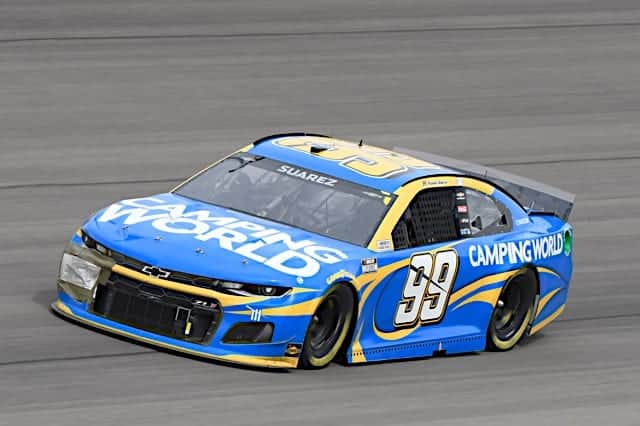 In the NASCAR Cup Series, who has been the biggest surprise of the year to this point? Biggest disappointment?

Luken Glover: After his performance at the Bristol Motor Speedway dirt race, Daniel Suarez has definitely been one of the biggest surprises this year. With everything the new Trackhouse Racing Team faces this season, Suarez is overachieving. He earned his first top five and top 10 in his new ride after leading a career-high 58 laps at Bristol, and he’s beating the fellow fledgling 23XI Racing with Bubba Wallace, Matt DiBenedetto and a couple of Stewart-Haas Racing guys as well. Aric Almirola has been the biggest disappointment, which has clouded the whole SHR organization thus far. For a guy who’s in his fourth season with the team with strong backing, Almirola is sitting in 28th in points after seven races. Three DNFs doesn’t help, but time may be running out on him.

Joy Tomlinson: William Byron is the biggest surprise. Who would’ve thought that he would dominate at Homestead-Miami Speedway three races into the season and take home the win? He followed that up with three eighth-place finishes and looked strong on the Bristol dirt track, ending in sixth. He’s also sixth in the point standings, which is much higher than where he was last year.

I’ll agree with my colleagues that Almirola is the biggest disappointment so far. The whole SHR stable has struggled coming off the hauler, but Almirola’s gotten the worse end of it. Some short tracks are coming up, though, so he’ll have a chance to get back on the right track.

Rob Tiongson: The biggest surprise has been Suarez. After a rather difficult debut in the Daytona 500 for the No. 99 team, Suarez and his hardy crew have been reeling off terrific finishes, with a solid average finish of 19.3 or 16.6 if you consider their last five races. When Suarez expressed confidence about his team prior to the start of the season, he was not simply saying it for good PR. Crew chief Travis Mack and car owners Justin Marks and “Pitbull are quite serious about fielding a competitive Cup effort. I look for this bunch to continue their steady progress as the year presses on.

As for the biggest disappointment in the Cup ranks, Almirola comes to mind. He is a truly talented racer, and his No. 10 team, when looking at who fields this entry, should be consistent frontrunners. Yes, they’ve had bad luck, and a good or bad run can be derailed by something out of their control like a crash or equipment failure. That said, I would think this is a driver who needs to turn it around after Easter.

Tiongson: I’ve really been impressed with Brandon Brown and the No. 68 team. This family-operated group overachieves and has this Ryan Sieg-like excellence in terms of extracting the most out of its equipment and not making any excuses. With some luck and consistency, Brown and his team could be in the mix for more top-five finishes at the short tracks and intermediates.

On the other hand, I’ve been disappointed with Noah Gragson. Most fans have polarizing opinions of this aggressive driver. Yes, it is good to have a driver who has character and speaks their mind. But he also needs to harness this aggression. There’s a reason why fans have embraced the Busch brothers in recent times even if they still display some of their Las Vegas swagger. Gragson needs to, as New Edition says, “cool it down and slow it down” some with the temper. If he can drive his car with that might but also know when to temper his angst, he’d be like a modern-day, real-life Cole Trickle.

Glover: If you wanted to throw Ty Gibbs out there as the biggest surprise, I wouldn’t disagree. However, out of full-time guys, I’ve been impressed with Jeb Burton. Ross Chastain did well in this car last year, but he didn’t win a race. I was not expecting Burton to have an eye-popping year in 2021. Through six races, he’s earned three top fives and five top 10s, tied for the most in the series with Austin Cindric and Daniel Hemric, who sit 1-2 in the points. Riley Herbst has been underwhelming so far. In a car that won nine races last season with Chase Briscoe, Herbst sits 12th in points with two top 10s. He is very young, but this season might determine who may actually want to take a chance on him in the future.

Tomlinson: Santino Ferrucci is the biggest surprise in Xfinity. After his first race at Homestead, he’s had three straight top 15s, which isn’t bad for a team that raced in nine events last season. His transition from open-wheel to stock car has been really good, considering he hasn’t had any practice in an Xfinity car. Of the full-time drivers, I would consider Hemric, as he’s contended for wins at Las Vegas and Phoenix Raceway.

Gragson has been a letdown so far, considering he was ranked in the top five in points this time last year. However, much of this is through no fault of his own. He was in the wrong place at the wrong time at Homestead, and then his engine let go at Phoenix. The 22-year-old is hungry for a victory and will likely let nothing stand in his way to get there.

As far as the Camping World Truck Series level, which competitor stands out as the biggest surprise and which is the most notable shortcoming?

Tomlinson: Carson Hocevar has done well considering his experience and equipment. He’s only competed in 14 Truck events and is in his first full-time season. The young wheelman has completed nearly all the laps and has one top five and three top 15s. He’s learning quickly, and I wouldn’t be surprised if he jumps up into the playoffs.

Tyler Ankrum has really been a letdown so far. Last year at this time, he was ranked 10th. That’s 18 spots further than where he is now. The lack of practice probably has something to do with it but his equipment is good enough to finish better than where he’s running.

Tiongson: While we’ve not had a lot of Truck races to really judge drivers and teams’ performances, it’d be foolish to dismiss the incredible efforts of Parker Kligerman. He’s not running the full schedule, but it seems like he and the Henderson Motorsports bunch constantly bring it and are within an adjustment or opportunity away from mixing it up for a win.

One driver who needs to step it up is Chase Purdy. He’s racing for one of the best Truck teams in GMS Racing and he just hasn’t nabbed those top fives or top 10 results that most drivers can get from these fast Chevrolet Silverados. He’s capable of turning things around, but the ARCA Menards Series graduate needs to elevate his game once racing resumes at Richmond Raceway in April.

Glover: If you look in the top 10 in points, there really isn’t one guy who surprises me up there. Just outside of the top 10 sits Carson Hocevar in the Niece Motorsports No. 42. He only has one top five and top 10 but has hung around the top 15 for most of the races so far. Hocevar is only two points out of 10th and is ahead of guys like Raphael Lessard and Chandler Smith, who are in better equipment. I’m disappointed in Ankrum. It has been a dismal start to the year for him, as he sits in 28th in points. This is a guy who I thought would compete for the title in 2020 and 2021. So far he has yet to show me that in GMS equipment.