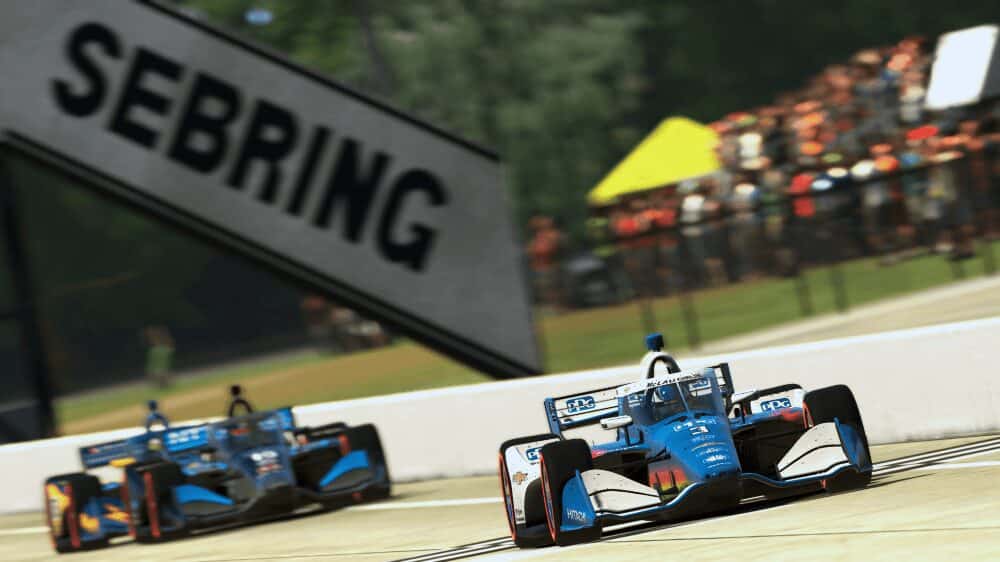 Scott McLaughlin pulled off a daring pass on Alex Palou late in Thursday’s IndyCar iRacing Challenge finale at Sebring to take the lead, and eventually the win.

The victory was McLaughlin’s third in the IndyCar iRacing Challenge after wins at Barber Motorsports Park and Indianapolis Motor Speedway last year. He was also 2020’s champion in its six-race season.

McLaughlin confessed his surprise after the race, saying he “didn’t expect to win” and thanking his virtual pit crew. Scott also offered some insights on his perspective on the coming season: “I’m excited about the ovals … I tested at Texas Motor Speedway yesterday and it was so much fun.” While McLaughlin’s road racing abilities are well known, he has yet to make an IndyCar series start on an oval course, though he seems to be antsy to change that.

Palou started on the pole, sharing the front row with Braden Eves, while Sage Karam and Enzo Fittipaldi made up row two. Palou got away well at the drop of the green flag, though Karam chased down and overtook the Spaniard by the end of the first lap.

Robert Wickens‘ return to the IndyCar iRacing Challenge was derailed quickly, as contact with a spinning Benjamin Pederson sent Wickens to pit road for repairs before the end of the first lap. Karam maintained his lead until the pit stop cycle began on laps 12 and 13. Palou pit first, while Karam and Eves stretched their virtual tires until lap 13, leaving Enerson and Fittipaldi to duke it out in the meantime.

After leader Karam struck the wall and eventually disconnected, the pit cycle left Montreal winner Palou as the leader, with Enerson and McLaughlin in pursuit. Palou looked set to take the win on his 24th birthday, though by the 10-to-go mark, McLaughlin was clearly the fastest of the top three.

McLaughlin disposed of Enerson with eight to go, and by the end of lap 21 of 26 the New Zealander was only 0.8 seconds behind Palou.

McLaughlin dove down to Palou’s inside into the final turn on lap 23, and the two ran side by side for the first third of lap 24, with McLaughlin eventually consolidating the lead and stretching it to almost a full second by the end of the race.

Enerson made one last attempt at Palou for second as the two dashed to the line, with Palou narrowly securing second place.

Behind McLaughlin, Palou and Enerson, Braden Eves and a surging James Davison rounded out the top five.

Three different drivers won the three Challenge events in 2021, with McLaughlin joined by Karam and Palou.