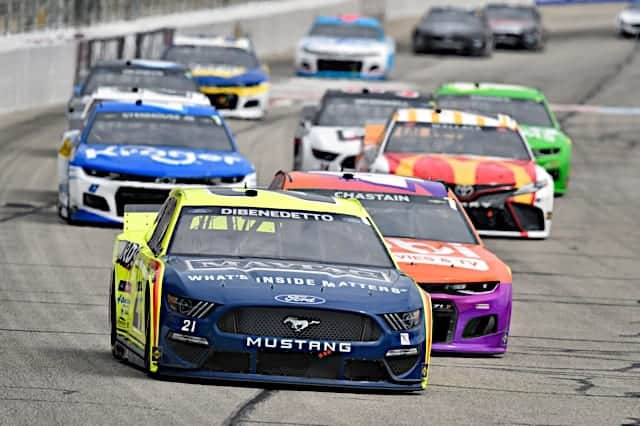 Last weekend at Bristol Motor Speedway, the NASCAR Cup Series did something it had not done since 1970 when it raced on a dirt surface.

Now it’s time for the top national touring series to do something else for the first time in 51 years: add a short track to the schedule.

Yes, that’s right. Despite fans begging for more short tracks for the past several years, no new short track facilities have been added since Meyer Speedway in Houston, Texas, made its way onto the Cup schedule in 1971. Only one race was held at the track, and then it was never seen again on the Cup circuit, like so many other short tracks from that time.

When I say short track, I’m talking about tracks under one mile. Phoenix Raceway, New Hampshire Motor Speedway and Dover International Speedway are not short tracks, and I cringe every time I hear someone refer to them as such.

You could argue that moving the All-Star Race to Bristol last year negates that stat, but that’s a non-points race. Plus, we lost a race at Richmond Raceway in 2020, so they cancel out.

From 1973-84, there were 10 short tracks races annually. That number dropped to eight following the departure from the Fairgrounds. In 1997, that number hit six after the closing of North Wilkesboro Speedway, and that’s what it was until this year when we lost another short track race due to Bristol’s spring date becoming a dirt race.

Thankfully, this trend of less short tracks is going to end soon. It was supposed to end in 2022 with Auto Club Speedway being converted to a half-mile. But since the race there this year was canceled, there is going to be one final race on the 2-mile layout in 2022, with the first race on the short track configuration pushed to 2023.

The Auto Club transition was awesome news, and I can’t overstate how excited I am to see how it will race. But only adding one short track date is simply not enough. This move just gets us back up to six short track races. It is a tiny Band-Aid on the gaping wound bleeding out short tracks. Plus, I’m scared that NASCAR will think, “Well, now that we’ve added another short track, we can take a date from Richmond.” Because that’s exactly the kind of logic NASCAR would use.

There’s also been glimmers of hope recently thanks to the words and actions of Speedway Motorsports, Inc. President, CEO and Director Marcus Smith. He and Dale Earnhardt Jr. went to Nashville and got a letter of intent to race at the Fairgrounds from local politicians. He then went on Earnhardt’s podcast Dale Jr. Download and brought up North Wilkesboro completely unprovoked.

See also
Holding a Pretty Wheel: Can NASCAR's Return to Dirt Resurrect a Ghost From Its Past?

“I just want to let you know we haven’t forgotten about North Wilkesboro,” Smith told Earnhardt. “We haven’t given up on it. I’m thinking. We’re working on it. No promises. I know a lot of people think I don’t care, and that’s not true, I really do care. If we can think of a way to do something there, we’re going to. I don’t want people to think I don’t care. We do care, and I am thinking about and work on ideas regularly.”

That comment got the attention of Marcus Lemonis, chairman and CEO of Camping World, who has already invested tons of money into NASCAR. If he gets behind Smith’s efforts, then a return to one of the original NASCAR tracks seems way more likely than ever before.

. @CampingWorld is ready to open store and some other stuff in Wilkesboro NC … cough cough @MarcusSMI pic.twitter.com/F78hMgJpcj

But still, there’s a lot of hurdles to overcome for NASCAR to ever return to North Wilkesboro or the Fairgrounds. The facilities at North Wilkesboro would almost have to be entirely rebuilt, while the Fairgrounds’ biggest obstacle is overcoming the neighboring residents who chose to move next to a racetrack just so they could complain about the noise.

We can’t rely on those two tracks as the answer to #MoreShortTracks, and Auto Club alone isn’t enough of an answer. We need more, still.

It wouldn’t hurt my feelings if 25-30 of the 36 Cup races were on short tracks, but that’s never going to happen. Give me nine again like we had in 1972. Then one quarter of the season would be on short tracks.

Fans begged for more road courses and have since gotten an overabundance of them and are likely getting a street course as a result. A source told me that the Chicago street course that will soon be released on iRacing could quite possibly end up on the Cup circuit in 2023.

(I’d also like to point out that I’m frickin’ Nostradamus for predicting a year ago that North Wilkesboro and a Chicago street course could be viable Cup race options.)

It didn’t seem like Cup would ever race on dirt again, even with fans wanting it to happen after some thrilling Camping World Truck Series races at Eldora Speedway. But it just happened this past weekend. Since it was a success, it wouldn’t surprise me if NASCAR tries to add a couple more dirt races. You know NASCAR has to have its own dirt track now to rival SMI.

But fans have been pleading for more short tracks for even longer than road courses or dirt and are only getting one new facility and no more than six on the schedule, as it has been for 25 years. We don’t just need Auto Club and the hope for North Wilkesboro and the Fairgrounds. We need another short track or two on the Cup schedule ASAP.

The easiest change would be for one of the Pocono Raceway dates to go to South Boston Speedway, as both are owned by MattCo. Who really wants to see two Cup races in the same weekend at Pocono, anyway? Might as well just run one race on that Saturday and air it again on Sunday, because it’s going to usually be the exact same race twice.

All the previous excuses for why you couldn’t race at a track like SoBo were thrown out the window in the past two years. It doesn’t have SAFER barriers? Well, we just raced at a track without SAFER barriers this past weekend, and newly added Nashville Superspeedway doesn’t have them in certain parts. SoBo only have 10,000 seats? Nashville only has 25,000. Do a couple improvements to the infrastructure and add some temporary seating and you’re ready for a Cup race.

TV pays most of bills anyway, and it seems the amount NASCAR is getting from TV could skyrocket even higher in a couple years. So who cares about not selling as many tickets or whether or not the high-class people will have a big, fancy suite to their liking. NASCAR needs to worry more about putting a highly entertaining race on TV, which is what SoBo produces on a weekly basis.

Then for another short track, hopefully NASCAR or SMI do a leasing deal like they’re doing with Circuit of the Americas and Road America. Since there’s no obligation to race at those two tracks every year, my hope is they become part of a rotation of tracks that NASCAR and SMI lease every couple years.

As part of that rotation, add Slinger Speedway to rotate with Road America so that you’re still racing in the Wisconsin market. It’s a track similar to SoBo in size, and SRX is slated to race there. Race there and maybe find a short track in the Northeast or Southwest, and then you can rotate them with COTA and Road America.

There are so many awesome short tracks around the country that NASCAR could race at every so often, but they don’t because they’ve gotten too big for their britches. By just adding one or two and then having Smith hopefully come through with North Wilkesboro and the Fairgrounds, NASCAR would mend the gap with grassroots racing, reconnect old fans and, in the process, put on a spectacular show.

How about making Wilkesboro a permanent dirt track? With attendance the way it’s been for the past several year…you know, about the time they went to a ‘playoff’ format?…it seems a lot smarter to have people clamoring for seats in a smaller, sold out track than seeing rows of empty seats. How about Iowa? Another great short track. I think the street course idea is a clever gimmick, but just don’t see it becoming a staple on the circuit.

Michael….Bristol is STILL A short track even if it’s dirt. Track length didn’t change. However, I also cringe when I read articles called Dover, NH and Phoenix short tracks because they aren’t. Sure they ARE shorter than cookie-cutter mile and halfs but still. I’d love to see a race back at Wilkesboro and the idea that the owner of the title sponsor for the truck series is behind it should give it merit. I am not that interested in seeing a “street” course in Nascar because that is what I consider “road courses.” Fontana converting is great news but somewhere, out there, is a guy with a lot of money (or girl) who could easily buy 200 acres of land and build a new bullring. I hope Nashville Fairgrounds comes back. You know, I love Pocono but maybe 1 race a year there (and make it 500 miles, please, not these short affairs, cars and parts are so much more durable in our time). I don’t know how all of these road course affairs will turn out but I know I am looking forward to Martinsville and the dirt race next year with the next-gen car.

A totally ignored market is the Pacific Northwest. Monroe is a 5/8 tri oval.

While I think it would be cool to watch cup cars at Slinger logistically I don’t think that is possible. There is no room to add a proper pit road and I am not sure 40 Cup cars on that track would make for good racing.

in Bakersfield California there is a really nice paved 1/2 mile with a shorter track inside that one. Right next door almost in the parking lot there is a dirt track not to sure of the size, I know for sure that they are all short tracks. Kern County Raceway Park. I,ve heard that u can see the whole racetrack from every seat in the paved 1. & That it’s For Sale. It’s between Las Vegas & Phoenix, it couldn’t be more perfect.

Nothing is perfect in Bakersfield, far from it in fact. Most people residing in bakersfield are there because they ran out of money escaping from LA towards las Vegas and got stuck there. People don’t travel to bakersfield on purpose. About on par with Mexicali. Dirt, dust and meth are prevailing.

I miss the old Richmond Fairgrounds half-mile loop. Saw the last race there, then Richard Petty symbolically bulldoze some asphalt, making way for what is many a racer’s favorite track, the 3/4 mile RIR. The racing is sick. Bummed Cup runs only once now.