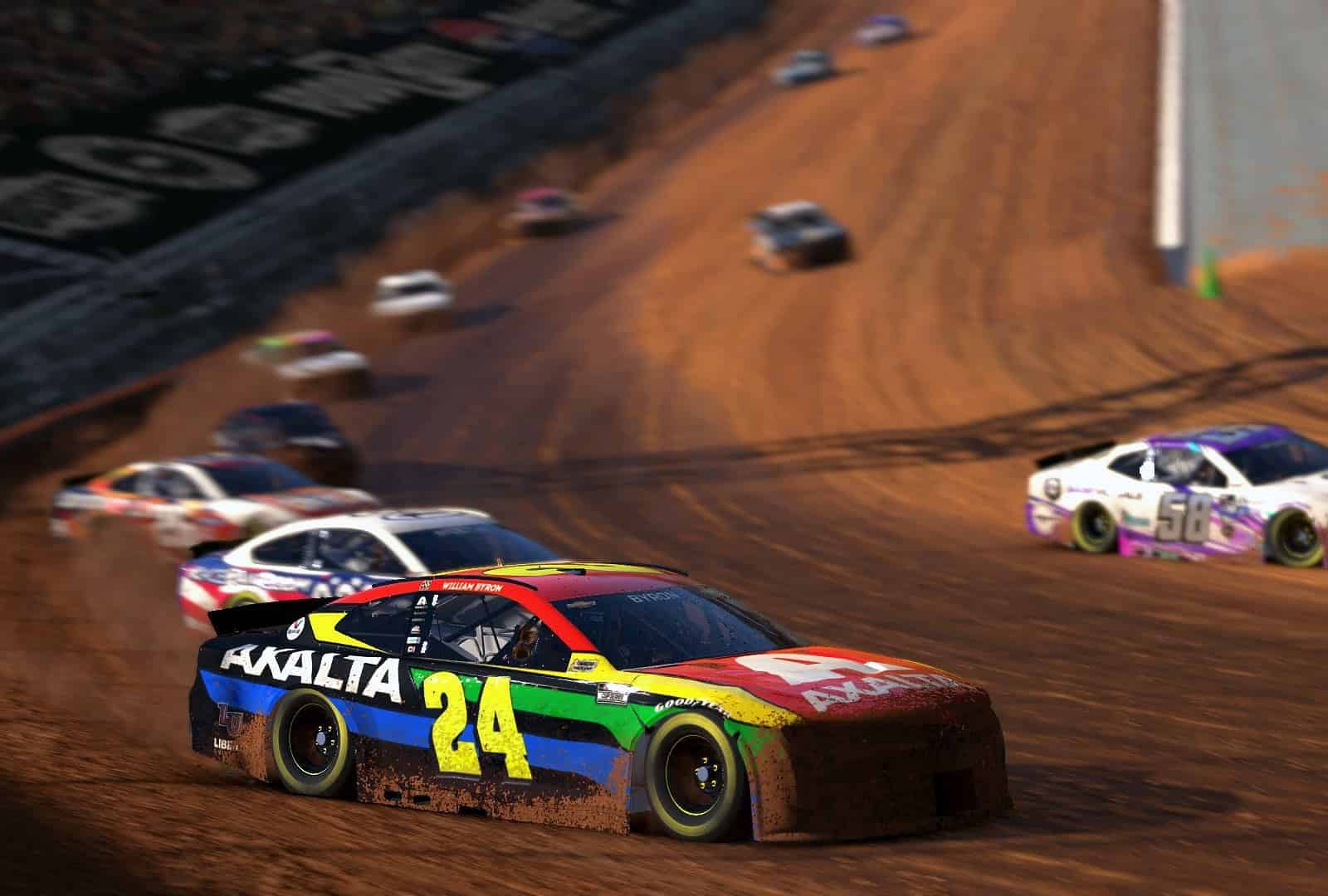 With the Easter holiday upon the motorsports world, there’s not a lot happening this weekend in the real world. Some sim racing leagues are also taking off as well, but that doesn’t mean we can’t talk about this past week on iRacing, full of its share of short track racing on both the asphalt and the dirt.

Outside of this issue, the fifth round of the 2021 eNASCAR Coca-Cola iRacing Series took place on Tuesday night. Brandon Hauff explains how Bob Bryant was able to strategize his way to his first career victory at Auto Club Speedway. On Thursday night, Alex Gintz covered the INDYCAR Challenge finale as the series wrapped up its three-race mini series at Sebring with Scott McLaughlin taking the checkers.

The seventh issue of The Virtual Frontstretch takes a look at some of the Bristol Dirt Track festivities around the service, as well as the opening race in Anthony Alfredo’s Esports Racing League in conjunction with Monday Night Racing.

Congrats to @Adam_Benefiel83 on taking his 4th victory this year in 100% Cup Series! With 4 wins in 7 races, does the road to the Cup go through the #83? pic.twitter.com/bNNbM6dJUe

Brandon Pierce started on the pole after winning the first heat. Ryan Samuelson won the second heat and earned the right to start on the outside pole. Cameron Stone was the winner in the final heat and would start third overall in the main event.

Stage racing was in play as usual. Originally, the NASCAR Cup Series intended to end the stages at lap 75 and 150, but after severe tire wear was found during practice in real life, the stages were changed and two extra competition cautions were added so that each run was no more than 50 laps. 100% Cup Series officials kept the original status quo, ending stages at laps 75 and 150 as intended.

Samuelson was able to hold on to win the first stage while Jon Dulaney claimed the second after a caution cut it slightly short. Even with the limited number of drivers on track, the surface was treacherous for the normally pavement drivers. The race racked up 18 cautions during the main event for 91 total laps under caution.

The eventual winner Benefiel was involved in an early caution on lap 18 but didn’t suffer race ending damage. He was involved in a few more incidents throughout, and by the end of things, the WR1 Chassis Camaro was riding around without a front or rear bumper. Still, it was still fast enough to hold off Dulaney in the closing laps. Dulaney led the most laps on the night at 87, but Benefiel led the last one to take the checkers.

If 22 cars on a dirt surface weren’t bad enough, how about nearly doubling that and taking away 50 laps? That’s what FTF Racing did on Sunday night in the Racing boi short FTF Dirt Nationals finale for the FTF Cup Series on Sunday night.

The night before at FTF featured iRacing’s NASCAR Xfinity Series vehicles on the dirt surface for 100 laps, and only 30 of those laps ran under green flag conditions with 37 total drivers. Hoping to change the conversation, directed toward a more stable setup, the hope was to bring more green flag racing to the fold. When testing on Tuesday night, William Byron used the FTF session to his own benefit as he was practicing for the eNASCAR iRacing Pro Invitational Series.

Things worked out great for Byron the following night. It did not make a difference for the FTF folks over the weekend.

Stock cars on dirt is a bad idea CONFIRMED. pic.twitter.com/1LXgaXEm31

After four heat races of 14 drivers each, the FTF field whittled down from 56 hopeful drivers to 43 starting the event. Alex Kolonics won the first heat and subsequently started on the pole position.

The race didn’t start off terribly, but after the track started to slick off, so did many drivers’ patience.

eNASCAR Coca-Cola iRacing Series driver Graham Bowlin went on to win the first stage of the race but lost the second stage to Collin Bowden. As the field continued to start and stop over and over, eventually Bowlin got involved in a race-ending incident with Kollin Keister and others, and both drivers retired on lap 133.

With Bowlin out of the picture, Bowden took over as the dominant car. Bowden went on to lead the most laps of the race and eventually took the checkered flag after 26 cautions and 130 slowed laps. This tied a record for caution flags during a BottomSplit broadcast.

Will Norton skipped this week’s race but continues to lead the overall standings. Keister and Michael Guest continue to lead the playoff grid with two wins apiece.

With Monday Night Racing taking the month of April off, the Esports Racing League is set to fill its place for the next five weeks until the start of the third season.

In the past two seasons, Anthony Alfredo’s ERL has attracted many of the top sim racers on the platform to compete against one another. The series was conceived before the start of the Covid-19 pandemic and blew up with an impromptu All-Star race when the pandemic took racing off the real world tracks.

Now in its third season and in a direct partnership with Monday Night Racing, Alfredo’s new vision is to utilize the series as a stepping stone series for drivers to possibly compete against him and other industry folks at MNR. The season three champion will get that chance, but to keep things competitive, ERL has instituted an iRating cap of 5500.

The first race of the season took place at the virtual Richmond Raceway with 85 laps around the D-shaped oval. The race was originally scheduled for its normal time slot on Monday night, but due to the rain delay at Bristol, the race was moved to accommodate since Alfredo’s real job is wheeling the Front Row Motorsports Ford Mustang in the NASCAR Cup Series.

Some MNR regulars such as Co-Founder Ford Martin and NASCAR Marketing Communications Manager Matt Stallknecht filled the field to get a feel for some of the hopefuls racing ability.

Brandon Key led the field to the green and straight up dominated the event, leading all but a handful of laps when William Hale attempted a two-tire pit strategy on a late caution.

Key held off Adam Cabot and Presley Sorah to take the win. The second race will be moved back to Monday night as drivers will take on Mosport in the iRacing Porsche 911 RSR.

On Friday night, a festival of meme racing took place courtesy of Matt Wishart and MoonVision.

Here it is, the list of drivers locked in to Grape Drink 6.
20 more will join them through tomorrow night's Qualifying race at Langley. Be there at 9:30pm EST, it's going to be wild.
And if you don't make the field, catch the main event LIVE on MoonVision at 10:30pm. pic.twitter.com/YT8rITF2Xf

For those unaware, Grape Drink is an event that takes place usually around holidays or NASCAR off weeks that features unlikely car and track combinations that end up being extremely fun to race in. The sixth edition of Grape Drink on iRacing featured NASCAR drivers Ryan Truex, Preston Pardus, Ryan Vargas, Will Rodgers and even a Myatt Snider cameo.

Like a game of Whose Line is it Anyway? the rules are completely made up and the points don’t really matter. Each race would bring different, random ways to qualify for the championship round. For example, in the first race at Talladega in the 2008 NASCAR Trucks, the winner of the race wouldn’t qualify for the championship, but finishing 19th would.

Approximately 19 drivers qualified for the championship race, but all participants were allowed to partake in the final race. On the final lap of the title race, it came down to two legacy drivers. Andrew Schwartz had it, but got taken out of the lead on the final corner. Gabe Herschel barely squeezed by the carnage and spun across the line first to take the championship, the sixth different champion in as many events.

COMING UP THIS WEEK

FTF Racing’s Cup Series is also off. Their Grand National Series (presented by Barr Visuals) will still race on Saturday night at Circuit de Spa-Francorchamps starting at 10:00 p.m. ET on STN Racing. The FTF Cup Series will return next Sunday night at Martinsville, live at 8:00 p.m. ET on BottomSplit.

As mentioned before, the Esports Racing League will be back on Monday night at 8:00 p.m. ET on Podium eSports driving around Mosport in Porsche 911 RSRs.

The Mooncar Premier Series is finally starting up this week. Following a three race qualifying series, the roster is set for what was described as a wild, fast paced schedule of events that will take place over the next month or so. Starting Monday night, the first race will take place utilizing the 2008 NASCAR Trucks at Daytona International Speedway. The second race will happen on Wednesday night with the 1987 cars at Talladega. Saturday night is the third race of the series on Bristol Dirt Track in the 410 Winged Sprint Cars. Races will be sporadically happening live on MoonVision.

Road-to-Pro Qualifying Series returns this week on Thursday night. Coke Series hopefuls will hope to navigate Richmond Raceway to the best of their ability to earn valuable points towards making the next round of the qualifying series. Top split will be live on Podium eSports as usual at 9:00 p.m. ET simultaneously running with second split live on STN Racing.