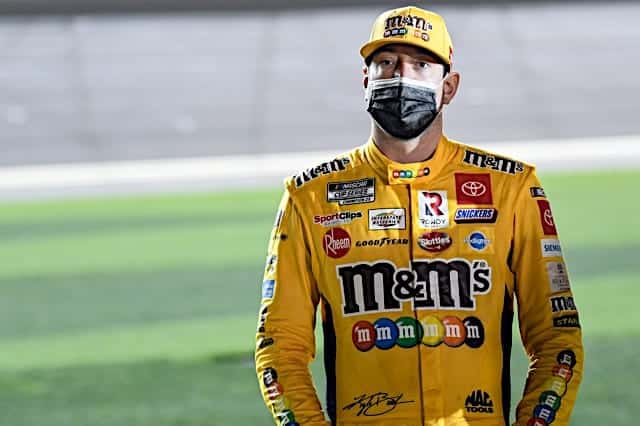 An old adage in professional sports is if you’re not constantly looking for ways to improve your performance, you’re probably falling behind.  Teams, plans and partnerships that worked well at one time do not always stay elite.  In order to keep up with the competition, a change in personnel can help to right the ship if the level of performance starts to drop.  It was likely with this thought in mind that Joe Gibbs Racing made one of the most surprising moves of the 2020 NASCAR offseason: breaking up Kyle Busch and Adam Stevens.

As a driver/crew chief combo, Busch and Stevens performed exceptionally well right from the start.  Their first five seasons together produced two championships, 27 wins and appearances in the postseason Championship 4 every year.  But the 2020 season was a step backward.  Busch struggled to run up front consistently and got knocked out of the playoffs in the Round of 12.  His only win came at Texas Motor Speedway last October, after the No. 18 was already out of championship contention.  As the season wore on, Busch often appeared frustrated by his team’s performance.  A lack of practice time in 2020, due to NASCAR’s COVID-19 rescheduling, threw Busch and Stevens off their game.

Reacting to the slump, JGR took the opportunity to reorganize.  The team selected Stevens as the new crew chief of the No. 20 car, soon to be piloted by Christopher Bell for 2021.  Gibbs then filled the vacancy on Busch’s pit box with a relative unknown, Ben Beshore.  Beshore spent just one season, 2020, as Harrison Burton’s crew chief in the Xfinity Series after several years as one of the No. 18 team’s engineers.  Additionally, JGR made some significant personnel adjustments to the Nos. 18 and 20, hoping to raise the performance levels of both teams.  The moves resulted in Busch’s squad having a different look for 2021.

Nearly two months into the new season, splitting up Busch and Stevens is a switch that still doesn’t make sense to me.  Certainly, the results of 2020 are not what either of them is used to achieving.  But it often felt like Stevens accomplished something with Busch nobody else has been able to match.  With Stevens on the pit box, Busch was a consistent winner and top-tier championship threat every single year, at least until 2020.  No other crew chief has been able to replicate the level of sustained success with Busch that Stevens enjoyed.  Did a disappointing year, one that was completely disrupted by a global pandemic, really mean that the best days of the Busch/Stevens partnership were over?

I decided to take a deeper dive into Busch’s accomplishments with all of his past crew chiefs.  The following table lists Busch’s statistics for all of his 577 Cup Series starts to date.  Note that the columns describing percentages refer to the percent of races that Busch ran with a specific crew chief, not his overall career.

It surprised me to find Stevens does not have the best winning percentage of Busch’s crew chiefs.  That distinction actually goes to Steve Addington, who was Busch’s crew chief for 2008 and most of 2009.  Those were Busch’s first two seasons with JGR.  Of his 12 wins with Addington, eight came during 2008, the first year the driver seriously challenged for a championship, with the other four coming in 2009.

However, looking only at Busch’s and Addington’s win total together obscures their weakness – a lack of consistency.  Oftentimes, Addington’s and Busch’s partnership produced boom-or-bust results, leading to stretches of bad races that knocked Busch out of title contention.  For example, all eight of Busch’s victories in 2008 came during the first 22 events.  Once the Chase began, the No. 18 stumbled badly.  In the first three postseason races, Busch’s best finish was 28th, allowing other title contenders to leave him in the dust.  The following year, Busch didn’t even qualify for the Chase despite being a preseason title favorite.  It is revealing that Busch’s record with Addington produced top 10s at almost the same rate as his time with Alan Gustafson at Hendrick Motorsports, despite winning much less frequently in Rick Hendrick’s cars.

Busch worked with Dave Rogers in between Addington and Stevens but continued to struggle with consistency.  His best season with Rogers was 2013.  The No. 18 finished fourth in points, which was Busch’s best performance at the time while earning four wins and 22 top 10s.  But even during that season, the No. 18 was a step behind drivers like Jimmie Johnson and Matt Kenseth when it came to the championship battle.

Despite showing promise, Busch and Rogers never seemed to reach the potential their partnership had.  It did not help matters that Busch developed a reputation as a temperamental driver who was often his own worst enemy.  When things got bad, he and Rogers just seemed to frustrate each other.  At Richmond Raceway in 2012, Busch seemingly gave up on his team after the handling went away on his car, costing the No. 18 a spot in the postseason that year.  But it was during the Bristol Night Race in 2014 when their relationship really appeared to crumble.  Caught up in an early crash, Busch lamented his misfortunes over the radio all night, finally prompting Rogers to tell Busch to “park (your car) behind the truck and take your whiny little ass to the bus.”

Having Stevens on the box mitigated, if not solved, Busch’s biggest issues.  Stevens decisively produced top fives and top 10s with Busch at better rates than any of his previous crew chiefs.  But most tellingly, Busch’s average points finish with Stevens is clearly his best.  It was with Stevens that Busch finally became a year in and year out title contender, maximizing the potential and talent so many knew he had.

Certainly, other factors helped Busch improve as a driver.  His recovery from a February 2015 accident at Daytona armed him with strength and focus behind the wheel.  Joe Gibbs’ seemingly endless patience with Busch and respect for him as a racer played a major role as well.  Busch also did what a lot of drivers do: he got married, started a family, and simply grew up.  There is no doubt he has a healthier outlook and relationship with the people around him than he did 10-15 years ago.

But Stevens is a significant part of Busch’s success, too.  Even their “bad” 2020 season was only lacking in terms of wins.  Pre-Stevens, Busch had only two years that produced more top fives and top 10s than 2020: 2008 (his best with Addington) and 2013 (his best with Rogers).

Only time will tell how successful Busch and Beshore can be together.  Right now, Busch is 13th in points with two top fives and three top 10s, but only seven laps led the entire season.  If the expectation was Beshore could give Busch faster cars off the truck, it hasn’t happened yet.  But if Busch really has matured as a driver and a person, his past problems might not crop up so readily, even with a new crew chief.

Besides, Beshore has time to grow into his new role.  Being Kyle Busch’s crew chief is an opportunity for earning lots of trophies.  And yet, nobody ever capitalized on the opportunity quite like Stevens did.  Suffice it to say that Beshore has some big shoes to fill.

What the article fails to mention is it was not Gibb’s choice in splitting Busch and Addington up. Kyle has stated in multiple interviews that Steve “needed a change” which Kyle was shocked when told the news.

Right – it was over something about changes Kyle requested to make to the team and Adam Stevens was not a fan of the changes and left.

Also, if memory serves me correct. Most those wins under Steve were with the new funky COT car. They seemed to had found something with it early, but it faded late.

Perhaps Steve had just gotten fed up with Kyle’s whining and complaining. I would imagine it gets old fast.

Steve or Stevens? Which crew chief are you referring to? Steve Addington or Adam Stevens. Two entirely different people! Sounds like you posted a knee-jerk reaction without even reading the article.

I don’t know if I’d call it “lack of consistency” that was responsible for Kyle’s lack of championship level runs in his early years. As I remember it, he was a lot more reckless in his early years. It was thrilling to watch, but it also resulted in a more than acceptable number of DNFs. I don’t know how much crew chiefs have to do with that, I think he just matured as a driver.

It has been stated in multiple interviews that Stevens was the one who wanted to change direction. Contributors should be instructed to read at least 10 times more than they write.

Absolutely correct! Apparently facts are no longer part of journalism, either from the writer’s perspective or the reader’s.

The reason could have been the usual one which is illness. One (both) was (were) sick of the other.

It’s pretty clear that most of the commenters here have no idea that Steve Addington and Adam Stevens were two entirely different people. As TiminPayson stated, the decision to leave was Adam Stevens’, not Kyle Busch’s or Joe Gibbs’. Please get the players straight before you leave a comment.