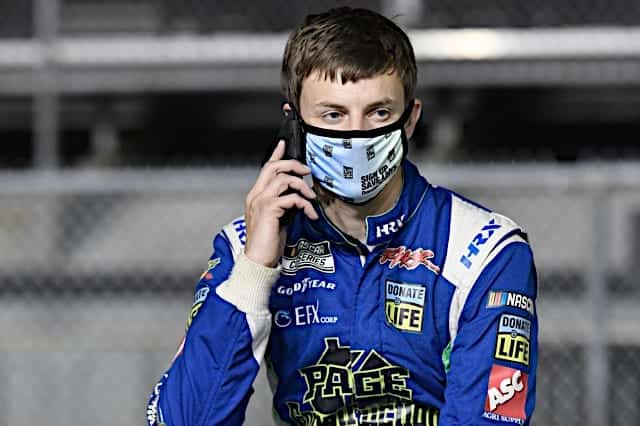 Gase will drive the No. 28 in both the NASCAR Cup and Xfinity series races at Talladega, Gase announced April 6.

The schemes celebrate the life of Allison, who died in a July 1993 helicopter crash, and the fact that he was an organ donor. As such, the cars will be sponsored by RegisterMe.org, which raises awareness of organ donation.

“When Davey passed, his family knew if he could no longer continue his life, he would want to do whatever he could to help others continue theirs,” Gase said in a release. “I want to show he was a hero both during his lifetime and after.

“As some know, my mom was an organ donor as well. It has become a mission of mine these last 10 years to keep her legacy alive by honoring donors and donor families and to help raise awareness for organ donation. There are currently over 110,000 people on the wait list nationwide for organ transplants. When I found out Davey was a donor, I thought it would be incredibly special to be able to honor him and his family at Talladega. It will be 28 years in July since Davey passed away.”

The release did not specify the team for which Gase is driving at Talladega, though Rick Ware Racing was tagged in a tweet about the entry and also tweeted about the release. Gase has driven for RWR in the Cup Series this year in its Nos. 15 and 53, and it’s possible the No. 28 may be a one-off number change for one of the team’s existing entries. RWR also fields the the No. 17 in Xfinity.

In three Cup starts in 2021, Gase has a best finish of 20th at the season-opening Daytona 500. If he makes the field, the Xfinity race at Talladega will mark his first start in the series in 2021; he has 244 career appearances on the circuit to his name since 2011.

Beat me to it, Don, helicopter. I was driving that morning from Myrtle Beach to Nashville and all the semi trucks had their headlights on. I got on the CB and asked what was going on and that’s how I found out.