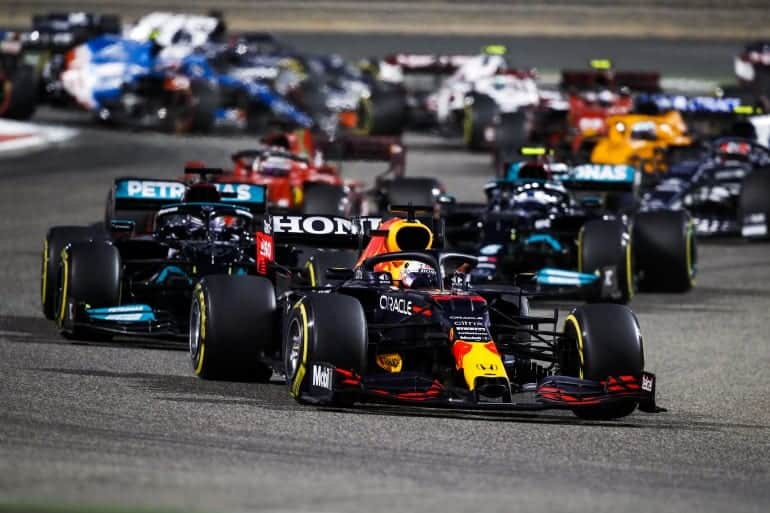 The Formula 1 season is enjoying the first of its two weeks off before resuming in Italy on the weekend of April 18. That means the news cycle is slow and everyone is offering very little in the way of salvos or defenses.

In fact, the past week has been dreadfully boring. After Sir Lewis Hamilton’s surprising win, the chatter has been minimal. Before moving on, however, a quick review of the Bahrain Grand Prix.

Hamilton had no real claim to that race. Red Bull was faster and looked to have the strategy to win. Max Verstappen seemed to have everything he needed to start the season with a win and put both Hamilton and Mercedes on their collective back foot. Yet he could not pull it off.

Verstappen did not choke or give the win away as much as Hamilton somehow snatched it.

That’s what champions do. They find little openings that look like slivers to everyone else and exploit them, eking out results that seem improbable.

Here are some oats from the past week.

– While many have been silent, Helmut Marko has been letting loose, apparently enjoying some time in the spotlight. The Red Bull advisor asserted this week that Verstappen was hampered by a differential issue in the gearbox in Bahrain.

Apparently, Verstappen could have been 0.3s quicker per lap in the early stages of the race.  However, the problem caused both Verstappen and Sergio Perez to spin their tyres, especially in sector one, bringing about an overheating concern.

The result, according to Marko, is that Verstappen could not adequately pull away and led to Hamilton being able to hold steady with the leader. Had Verstappen not suffered from this condition, he would have gapped the undercut and been easily in front of Hamilton.

Marko’s comments seem to be a PR move aimed at keeping Verstappen’s confidence high after a tough loss more than a sterling realization. There is little doubt that Red Bull can do the math and figure out that they may have been struggling with the setup on its cars. The specific claim is a bit funny, however, because every car’s performance is a moving target during a race.

There’s a chance that had Verstappen been able to punch out times 0.3s faster that he could have cruised – yet it also stands to reason that Hamilton may have been able to keep up and was saving his car and managing the gap behind the leader. Marko is living in make-believe land and already trying to keep his driver focused.

On the flip side, Marko is also letting Mercedes know that they are faster than they showed. Mercedes does not need this prattling to know that. It has the data. And there is a good chance that Mercedes is making corrections to its cars all the while.

The question that comes from all this: Is Max Verstappen’s psyche fragile? Does he need Marko coming out in defense of his race at Bahrain?

– Marko was not done with blathering during this off week. He also stated that Sebastian Vettel should have taken a break for 2021 and come back in 2022. Vettel is, no doubt, thanking Marko for his input.

It is clear that Vettel turned in an awful season in 2020, underperforming and making stupid mistakes. It is also clear that Ferrari was a rudderless boat and had no way of handling the peculiar dynamic between its two drivers.

Vettel even seemed to carry over his bad habits into Bahrain, driving a terrible race and at one point punting Esteban Ocon for what looked to be no good reason. Throw in his qualifying error, when he failed to slow for yellow flags in Q3, and Vettel looks like he is a failure.

Whether Vettel should have sat out 2021 is a wholly different matter. He looked like a driver that was pressing too much in a car that could not keep pace and trying to look good for his new team.  The result was a terrible weekend. Vettel is still a four-time champion, and Aston Martin Racing are giving him full support – as compared to whatever Ferrari was doing – and there’s a good chance that as the car improves he will revert to form. Taking a year off would not help that trend.

– During the downtime, Pirelli has been putting drivers to work in testing out the new tyres for the 2022 season. One of the big changes coming with the new car for next year is the switch from 13-inch tyres to 18-inch tyres with less sidewall. The look can be found here.

⁦@alo_oficial⁩ from ⁦@AlpineF1Team⁩ “It was a great day of testing at ⁦@BAH_Int_Circuit⁩ and the new #Fit4F1 tyres feel good already. It is at an encouraging stage of development” 1/2 pic.twitter.com/P7B1Aj3AVi

Drivers have offered positive feedback so far and the style is sweet. While Pirelli has often faced a fair amount of criticism, this switch is one where they should be offered excellent reviews because it is quite the undertaking making such a massive switch in racing skins.

Ava,
What’s up with the return of MISSION WINNOW on the Ferrari? I thought this was banned. How about an article CODACONS?