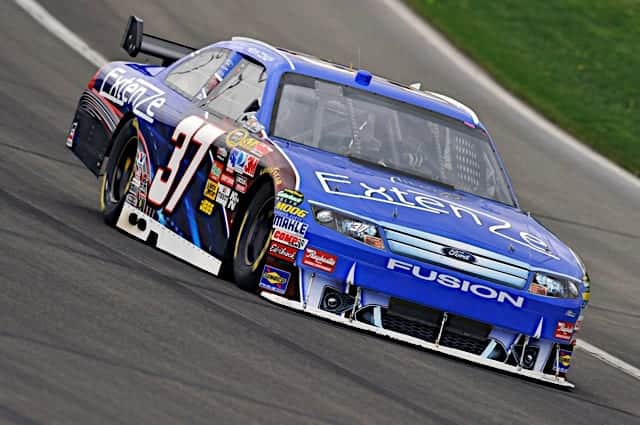 The 2020 NASCAR rookie class in the Cup Series was a memorable one, with Cole Custer prevailing over four other drivers and winning the award after being the only rookie driver to make the playoffs. For 2021, the freshman class is down to two drivers. Unfortunately, they haven’t had the kindest of beginnings in their Cup Series careers.

Through the first seven races of the season, Stewart-Haas Racing’s Chase Briscoe has an average finish of 22.1 with a best performance of 18th. Anthony Alfredo, driving for Front Row Motorsports, has a mediocre average finish of 29.3 and has run no better than 22nd.

Of course, there’s still 29 races left on the schedule for both men to prove their worth. But if those rough performances continue, it would be one of the more disappointing seasons for Cup Series rookies in recent history.

However, their seasons are far from the worst we’ve seen among first-year flops. Here’s a look at five of the more embarrassing rookie performances over a full season in modern NASCAR history.

Sure, Kevin Conway may have won the 2010 Rookie of the Year award with ease, as he basically had no Cup Series competition. But, just like an old primary sponsor of his, the performances during his lone full-time season fell limp.

Conway’s Cup debut came in the second race of the season at Auto Club Speedway in California, finishing three laps down in 31st. His time from that point on mostly consisted of racing in the back of the pack, more or less becoming a neutral force on the track. His best performance came at Daytona International Speedway in July, where he picked up a career-best finish of 14th, but he competed in just the first 22 events of the season before issues with his main sponsor, Extenze, forced him out of the seat for a few races. He hopped between a few other teams to finish out the year, totaling 28 starts altogether in a shortened 2010 campaign. He ended up 35th in points with three lead-lap finishes, an average finish of 32.8 and nine DNFs.

Conway only made three more Cup starts and nine Xfinity starts in 2011 before completely dissolving away from the world of NASCAR (and the national spotlight… until recently resurfacing in an appearance on Shark Tank).

Conway may have a ROTY award to his name, but that’s about all on a NASCAR resume devoid of any real accomplishments.

Andy Lally was already a proven winner in sports car competition. However, pursuing success in different forms of motorsports, he took up the chance to compete full-time in NASCAR. Sports car connection Kevin Buckler, team owner of The Motorsports Group, provided Lally the opportunity he needed.

The problem was, Lally never really cashed in.

After a seven-race stint in 2010, Lally ran 30 out of 36 races in 2011. DNFs were never an issue, as he only recorded four, but the raw speed that the No. 71 team just was never enough to be truly competitive. Lally scored an average finish of just 30.8, earning a best result of 19th at Talladega Superspeedway in April, one of only two lead-lap results he scored all year.

Lally was replaced in the finale by Mike Bliss, released from the team before TMG shut down their NASCAR operations for good. He ended the 2011 season 35th in points, without a ride, but it was still good enough to win the Rookie of the Year award.

A full-time career in NASCAR may have not been in the cards for Lally, as he’s made only 11 starts over the past decade (all in the sport’s Xfinity Series, typically as a road course ringer). However, he has since returned to victory lane in his beloved world of sports car racing, winning five times since 2014 in the WeatherTech Sportscar Championship Series.

Stephen Leicht was a one-time Xfinity Series winner, a former Robert Yates Racing prospect whose star power was fading away. Once slated for a full-time Cup Series ride, he made just one NASCAR start between 2010 and 2011 combined. But in April 2012, his fortunes turned after being tabbed by Circle Sport Racing to drive the No. 33 Chevrolet for most of the remaining Cup schedule.

Was it worth it? The answer is… a little complex.

The battle for the 2012 Rookie of the Year award came down to Leicht and Josh Wise. Wise qualified for 30 races, but most of them were start-and-park efforts. He only finished one event, a 30th-place effort at Sonoma Raceway, and ranked 39th in the final standings. But the mind-blowing part in this competition? Leicht made just 15 races (yes, 15) out of 36, scoring a season-best finish of 26th at Watkins Glen International. Even after a 41st-place points finish and running half the number of races that Wise did, he was still crowned Rookie of the Year for 2012.

Leicht’s ROTY-winning season may have been a boring one, but it extended a NASCAR career that continues to this day with spot starts in the NASCAR Xfinity Series. And at least Leicht got to make an appearance on the blooper reel when he hit a groundhog at Pocono Raceway.

The Mears name is among one of the most well-known in motorsports. Roger and Rick Mears were both extremely successful drivers at Indianapolis Motor Speedway, with Rick winning the Indy 500 four times between 1979 and 1991. Casey Mears, the son of Roger, initially tried his hand at open-wheel racing but switched over to a career in NASCAR, running for 2003 Rookie of the Year in the Cup Series.

Needless to say, Mears probably could’ve used more stock car experience before jumping into Chip Ganassi’s No. 41 Dodge, and the numbers bear this out. He scored a season-best result of 15th at Las Vegas Motor Speedway, but that was one of just four top-20 finishes in a horrendous year. Mears suffered 10 DNFs, an average finish of 30th and wound up 35th in the final point standings. For a Ganassi-owned car, these stats were embarrassing, especially considering Sterling Marlin had contended for a championship in this equipment the year before. To add insult to injury, Mears’ CGR teammate Jamie McMurray racked up significantly more success, finishing 13th in final points and winning the 2003 Rookie of the Year award.

Fortunately, Mears was able to move on from this abysmal season. He scored one Xfinity win in 2006 and one Cup win in the 2007 Coca-Cola 600 with Hendrick Motorsports. His last NASCAR start was in the 2019 Daytona 500, where he finished last due to a crash.

The 2001 rookie class in the Cup Series was a memorable one, too. Kevin Harvick won the award despite missing the Daytona 500 before taking over Dale Earnhardt’s old ride. Kurt Busch, Casey Atwood, and the late Jason Leffler were other top contenders. But the one who visibly had the worst season out of the group, torpedoing his future chances at NASCAR’s top level was Andy Houston.

Houston was already a proven winner in the Truck Series when Cal Wells picked him for his new second car on the Cup level. He and Busch were simultaneously promoted from Trucks up to Cup, with Busch headed to a Ford rival at Roush Racing.

What could go wrong for Houston’s new team, especially with the backing of McDonald’s sponsorship? Well, a lot can, and a lot did.

Out of 36 scheduled races, Houston only qualified for 17 of them. A 17th-place finish at Martinsville Speedway was his only major highlight of the season. The rest of the year was a total nightmare, with a total of nine DNFs and eight DNQs to boot. After finishing 18th at Kansas Speedway in September, McDonald’s walked out the door, forcing the No. 96 PPI Motorsports team to cease operations at the end of 2001.

Houston never made another Cup start. His disastrous rookie season featured an average finish of 39.3 alongside a 46th place points finish (yikes), leaving him spiraling downward back into Xfinity and Trucks, then out of the sport completely by 2005.

Houston has since left his driving days behind him, but you can still find the North Carolina native working as a spotter. He currently serves as a one for – coincidentally – 2020 ROTY Custer in the Cup Series for Stewart-Haas Racing.

What was the point of this? Just to drag a few guys through the mud again?

just another young carpetbagger tryin’ to earn a buck, i reckon.

Perhaps it is just payback for exporting the Clintons to NY.

Nah, that’s not the point. The point is to educate people on the history of the sport. We need fans, not naysayers.

Bill B
Reply to  Paul Carter

Nope. I think the point was, it’s an off week and they are all scrambling for something to write about. A lot of that going around this week.
No new stories no clicks.

I think it’s informative. The history of the sport is important. Most of these guys are successful now in different fields. Maybe they didn’t have the best experience in racing because talent is hard to spot. You drop a Joey Gase in a Hendrick car and he could run top-10. As a fan of the sport and having watched EVERY race since 1992 plus many at the track I’ve seen a lot of people without talent. Sometimes talents lie elsewhere. This writer isn’t trying to drag someone in the mud, but simply pointing out the guys that were the worst rookies. There are others you can add to this list like Mark Martin, who didn’t even finish his rookie year (if you run 5 races or more you are not eligible for ROY). I don’t believe Leicht received a fair shot because even in the crap equipment he has, he still improves his spots. Conway–Coke and not the kind you drink. Lally was having fun and Mears was not that good. What about Dario Franchitti? He was horrid. Only really good rookies we’ve had were Allison, Earnhardt Jr, Kenseth, Newman, Stewart, Elliott and Gordon. Let’s all take a moment to appreciate our sport, unlike the trolls above. I dislike fairweather fans.

Congratulations for watching since 92, wow. Newman huh, yeah he won rookie of the year with 1 win and finished 6th in the points. Another fella you’ve probably heard of since you’ve been around so long by the name of Johnson, had 3 wins and finished 5th in the points. He didn’t have as many poles as Newman but I’m sure you know that poles don’t count for any points. He wasn’t to shabby a rookie as time would tell. Good luck young un.

LOL… I thought the same thing when I read that this morning.

Plenty of saltiness I see around here, lol. Thank you Josh. Glad that you understood the message I was trying to send. Hope you enjoy reading the next one! As for the first few commenters, there is a way to give criticism in a constructive manner instead of a destructive manner. You’ll sound less rude that way. Consider it sometime.