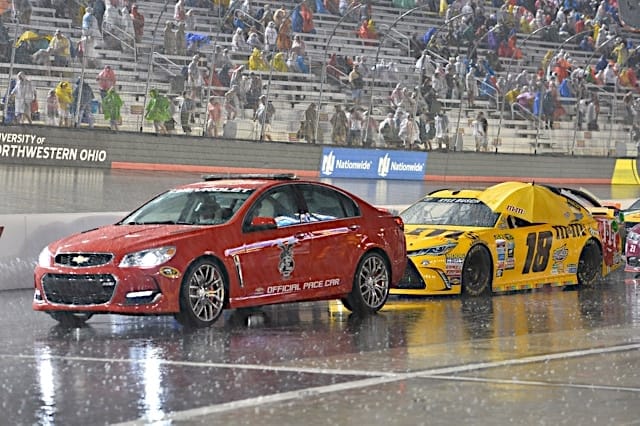 Hey, what was that last one?

NASCAR’s recent tire test evaluating the feasibility of running a wet tire at an oval with limited corner speed is a step in that direction. While we likely won’t be ripping around Kansas Speedway or Michigan International Speedway in a monsoon, a short track like Martinsville makes for an interesting proposition. Vito Pugliese and Mark Kristl face off this week, debating its pros and cons.

Last Thursday (April 1), another potential game-changer for NASCAR took place, with the test of rain tires at Martinsville. Kyle Larson and Chris Buescher ran in manufactured conditions, simulating wet weather performance of the Goodyear Eagle rain tires. On the surface, this seems like it would be one of the few ovals where racing in the wet makes sense. The tight radius, relatively flat turns under braking aren’t much different than a passing zone on a road course, and the speeds are about the same as well. A half-mile track may not take as long to dry as Daytona International Speedway or Talladega Superspeedway, but it’s still precious hours of time being consumed for both teams, fans, and perhaps most importantly, television networks. If the goal is to get to halfway, running some laps under caution or at a reduced pace with rain radials is a good way to eat up some laps and help make a complete race.

This technically wouldn’t be the first time that NASCAR ran on an oval in the wet. They actually did race at the Charlotte Motor Speedway ROVAL last year in the wet, and it wasn’t the disastrous outcome that some have always maintained would happen. Goodyear’s Greg Stucker was on Sirius XM NASCAR Radio on Tuesday and gave generally positive reviews.

“The Martinsville test was our first genuine step of trying to identify if there are certain wet conditions on an oval track where we would be comfortable actually racing, either getting a race started under somewhat wet conditions, or returning to racing on a damp wet race track,” said Stucker, Goodyear’s Director of Racing operations. Larson, who was one of the drivers providing feedback seemed encouraged by what he felt behind the wheel.

“Honestly, didn’t drive way different,” Larson said. “You could still slow down good, turn good. Drive-off was easy to spin your tires, but other than that, it was kind of fun to chase the grip throughout the portions when it would start drying.”

So if the tire vendor wants to do it, and one of the best drivers in the series who has spent most of his life on dirt and not wet asphalt says it’s fine, why not? NASCAR is in a pivotal position, as they have seemed to be the last five or six (i.e., 10) years. As we’ve already experienced at Bristol and the Daytona 500 year, there is nothing worse than a rain delay. The waiting, the endless driver interviews, or a race from a year ago that inevitably gets confused for a live event on Twitter, it’s just an absolute time suck for the broadcast networks.

NASCAR races, which have tragically returned to late afternoon EST starts, means the end of the race is right up against the prime time shows for those networks. While fans can deal with it, the uncertainty of start and end times doesn’t make for the most attractive package when it comes time to renegotiate a TV contract. The outlets for racing might also be contracting. NBCSN is gone after 2021.

Other than baseball, only NASCAR lasts that long and can be stopped by a rain shower. Granted, if there’s lightning, then any sport stops, but there are some steps NASCAR can take that would help get things wrapped up and prevent a Monday race. Lights are one thing, but a way to burn off some laps – or just keep from losing the track by keeping the cars underway – is something that’s probably been a long time coming.

Sure, Marcus Smith wants to put a roof on Bristol …though Monster Jam decibels multiplied by 20 and carbon-monoxide poisoning sounds like a bit of a deterrent, running rain tires at tracks that can support it is a natural next step for NASCAR, as it continues to challenge itself and takes steps to get out of the mode of thinking that saw the product get a little stale over the past decade. – Vito Pugliese

Nobody likes a rain delay. Nobody can control the weather. However, the use of rain tires is too risky while also ruining the experience for the fans at the race track.

In the Midwest, when it snows for the first time late in the year, drivers are either overly cautious or awfully reckless. It is a recipe for disaster. Using rain tires on flat ovals would yield a similar outcome for NASCAR drivers. Some would drive too aggressively while others would drive too conservatively. The differing styles would be catastrophic. There would be wrecked racecars, possible hurt feelings and an expensive bill to race teams. All those results would be preventable by not using rain tires to race in the rain.

Regardless of how drivers approach the racetrack while using rain tires, conducting a race while there is precipitation also is unnecessarily dangerous to crew members’ safety. Noah Gragson and Daniel Hemric scuffled after a pit-road incident on a dry racetrack. A wet pit road becomes too risky for pit crew members. They already place themselves into potentially dangerous situations pitting a race car during high-level competition. The most likely scenarios for using rain tires on pit road during a race all are problematic.

If NASCAR is conducting a race on a flat track in the rain, pit road is wet too. While drivers may have control of their cars on a track at race speeds using rain tires, the moisture on pit road remains. Drivers push the limits on pit road speeds. If pit road is wet, a driver’s braking point could be too late to fully stop the car. As a result, a pit crew member unfortunately may end up in a spot where he or she could get hit. Then, the use of rain tires no longer affects just the outcome of a race; it affects a human’s physical safety. That is too dangerous for NASCAR to tinker with.

Ever attend a race and a weather delay breaks out? Until officials announce the future of the event, you have one of two options. The first option is to pack up your stuff and go home. For a local short track race, you may deem it worthwhile. But for a NASCAR race, where you have spent more time, devoted more money, and made the commitment to attend, leaving a race prematurely due to inclement weather becomes more debatable.

So, you have a second option: stay and wait for either the resumption of racing or an announcement by officials. If you indeed wait it out, you are focusing on staying dry, perhaps visiting the concession stand for refreshments, checking the radar on your phone, etc. None of those involve watching the race.

When on-track action resumes, you attempt to dry your seat as best you can, then you sit down to continue watching the race. It is dry out, so the racing resumes.

What happens if there is a third option – NASCAR will hold the race in the rain as drivers use rain tires? Then what do you choose? Sit in the rain, watching a race where drivers are not racing under normal conditions? You get wetter, you are left displeased you were forced to watch this event in the rain, and you risk catching a cold, increasing fear in our current society. When you return home after suffering through a race in the rain, even though drivers wheeled the cars on rain tires, you voice your thoughts on social media. It reflects poorly on NASCAR. Why should NASCAR risk it then? It all adds up to a bad experience, and as NASCAR welcomes more fans back to the track, negative feedback dissuades people from attending the race.

I applaud NASCAR for innovation. Stages have given some excitement to races, the schedule was changed, and the Next Gen car offers a great deal of promise. However, innovation should not preclude unnecessarily costing teams money, crew member safety, and a fan’s at-track experience. Rain tires on flat ovals open too many terrible possibilities. – Mark Kristl

I’ve watched “racing” in the rain at Pinecrest Speedway and it wasn’t pretty. It’s too easy to block the track. The cars need a lot of runoff area for the spins like on real road courses.

I think NASCAR should shelve ever running when it’s really raining (like in the picture above) but it would be nice if they could run on a wet track or when rain is light or intermittent. It doesn’t have to be an all or nothing proposition. Most weekends when it rains there are breaks, and if you don’t have to have a 100% dry track to run it opens a lot of possibilities for getting the race in.