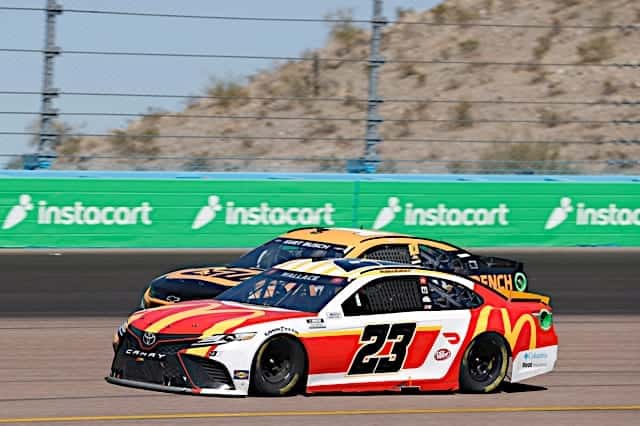 What is the state of team ownership in NASCAR?

It is expected that NASCAR’s next TV contract will see an increase in rights fees being paid, as this column elaborated on last month after both the NHL and NFL signed contracts last month for substantial increases. Hockey tripling in value in particular was a good sign, as NASCAR is a bigger property than the NHL as far as national television ratings and rights fees.

With all of that new potential money coming in, that is going to attract new owners. In fact, it already has. While owning a NASCAR team rather infamously doesn’t hold much long term value — just ask long time team owners that walked away with just some gas money like Junie Donlavey, Larry McClure and Bill Davis — it also isn’t that expensive compared to other sports franchises.

That’s going to draw a fair amount of attention from the rich who can’t get into the big four sports if NASCAR were to double or even triple its television rights. It arguably already has with Trackhouse Racing Team and 23XI Racing. Michael Jordan has said that a big reason why he jumped into NASCAR team ownership is because Bubba Wallace was available, and that is more than likely true, but let’s also not pretend that Jordan and his people didn’t get a lay of the land before committing to this team. Ditto with Pitbull and Trackhouse.

Add in that supposedly this new car will cut operating costs, and there’s a good chance a number of new race teams are on the horizon.

See also
4 Burning Questions: The Search for Even More Money

What would be the benefit of increasing the charter count?

It has started to become quite clear at this point that the Race Team Alliance really needs to at least consider the idea of adding more charter teams and extending the amount of cars starting a Cup race.

I can understand their reluctance. While the start of the RTA, during which hedge fund manager, RTA president and Michael Waltrip Racing owner Rob Kauffman closed MWR and sold both of his charters away on day one, was pretty fishy, the reality is that the stated goals of the charter system have been achieved. All of these teams are going to gain in value thanks to simple supply-and-demand.

Now, granted, a NASCAR race team will never be worth $2 billion, simply because an owner has to be more hands-on than a normal sports franchise owner. The Jacksonville Jaguars have won more than six games just once in the nine years Shahid Khan has owned the team after buying for $760 million, and yet the team has almost tripled in value under him as well. Dale Earnhardt Inc. would have turned into a great example as to why a race team just cannot do nothing and make money like that if it had not merged with Chip Ganassi Racing.

That being said, it really seems counterproductive to essentially hold the field to 36 cars. Ryan Preece doesn’t have funding for the full season as an open car as of a couple of months ago, and open cars just don’t make enough money to break even without substantial sponsorship — look at MBM Motorsports cutting back its full-season plans as of this week, with the No. 66 not on the Martinsville Speedway entry list.

Expanding the charters from 36 to 40 would also open the door to existing teams to expand. Anybody who thinks 23XI is just going to stick to one car is probably going to go try and spend their beach vacation in Wyoming. Also being just a little more strict with the revoking system could be beneficial, even something as simple as “if an owner has a car in the bottom three in points, they will be open to losing one” instead of just a car; Rick Ware in particular has been playing a balancing act with his charters for a while now when it comes to this.

Sports are a business, and the point of a business is to make all of the money. Not some of the money; that’s why we have 50 streaming services now. But sports are also a teeter-totter act between what’s good for money and what’s good for competition. Staying with things the way they are now with multiple opportunities to expand is going shift things just a little too far into the money side of things.

Will Bubba Wallace make a splash at Martinsville?

Martinsville is the oldest racetrack in all of NASCAR and also the most unique oval track in modern stock car racing. There’s a number of people who think that Martinsville should cut its Cup race laps from 500 to a more manageable 400, but the way it is now, drivers really need to be good at a lot of things (pacing, stamina, tire management, brake management, etc.) in order to win there.

One driver to keep an eye on Saturday night will be Wallace. The Alabamian has had some strong runs at Martinsville over both the Cup and Camping World Truck series, and moving over to TRD, which has long been strong on short tracks, should only help him this weekend.

How will crowds look later this year?

Jeff Gordon revealed April 8 that he tested positive for the coronavirus during the off-week.

While Gordon has been lucky enough not to have severe symptoms, it’s becoming clear that the vaccination effort in the United States has come just in time. The new Brazil strain of COVID-19, thought to be more lethal, has led to a gigantic spike in deaths in Brazil, in a time where the United States’ new case and death counts are dramatically lower than they were in November-January. Canada, a country that has trailed the US in vaccination rates, has seen a big spike, believed to be due to the Brazil strain outbreaking in British-Columbia, in the last couple of weeks.

While the Brazil strain is theorized to be more effective against existing vaccinations, the simple reality is that all of the United States’ numbers are comparatively low besides testing and vaccination numbers. At this point, in a few months, it really would not be surprising if day-to-day life will finally return to being fairly normal, with full normal maybe not coming at least until child vaccinations are finished being tested and approved for use.

Judging by just how large crowds have been for events that have fully opened and the sellouts for partial event openings, it would not surprise me if NASCAR sees a number of sellouts this fall.

Which would be good news for everybody after this long year.

Revoking charters becomes challenging until you eliminate the leading nonsense. Rick Ware has positioned himself as a power broker in this sport who has played by these stupid rules. As the cars become kit cars next year and star power becomes diluted in the name of parity, NASCAR has a philosophical problem of figuring out whether they are a sport or entertainment. Because the customer base is quite different. Good article.

Honestly, the way things are going in Cup, charters will be the only teams running. Martinsville has only 37 cars on its entry list for Cup. That means only one non-charter team is showing up. Does this look like a healthy sport to you? If Nascar gets a significant rights fees increase, I will be very surprised. Hockey is on the upswing and getting more and more popular, and well the NFL is the NFL. Nascar is on the decline and has been for years. Not sure you can compare the 3.

The goal was from the beginning to have only charter teams participating. And I suspect that that there will be a rights fee increase. After all what other choices d the networks have that will bring in more viewers?

That said I believe that the things that Nascar is doing, rain tire tests, dirt tracks, are to strengthen their position when the time to renegotiate comes. Although I suspect it has been going on at a low level for a while.

As to wanting more charters, why? The more charters will dilute the money that the current charter teams get. Which means that they will fight that. The RTA as well as Nascar are in it for the money not the long term health of the sport. They will let their successors worry about that.

Why is Bubba the “driver to watch” every single week? I’m not anti-Bubba, I’m not even anti-BLM, but this constant pandering to a guy who hasn’t come close to winning is getting old. How about wait until he actually accomplishes something?

“Because it sells papers”, LOL. You may read it because it ticks you off, for the reasons you mentioned. Others may read it in the hope that he will win. That it wont be the same old faces for another week.
Either way they win. Much like the political commentators, for 4 years they support their guy, then for the next 4 they attack the other guys who are now in power. It never ends and nothing changes.
“Go Bubba!, NO Bubba!”

Jeff Gordon mentioned that he had recently received the first dose of a COVID-19 vaccine. I was told when I got mine that if tested within 28 days of receiving the vaccine I could possibly yield a false-positive result. Jeff will be fine.

As for the charter system, apparently NASCAR is cool with Rick Ware hoarding 4 for his uncompetitive cars (and Spire with its pair). Kauffman, (his) RTA and BZF’s boys cooked up the charter system and made all the rules. Kauffman got paid and ran over to hang out with Chip Ganassi. There is supposed to be a “bottom 3” rule to bump out non-performers, but it has yet to be enforced. I haven’t heard a “peep” of protests from the owners about the charter system, so they must be happy with the status quo.

I do agree with you that NASCAR will be getting even more TV money come 2004. However, it will be interesting if the coverage will involve 1, 2, or even 3 networks. However, I wonder how much will end up on streaming-only platforms and maybe even PPV?

Interesting JT, I didn’t know that about the false positive result based on receiving the vaccine.

Nice try at “perfuming the pig”. Have you looked at the viewership numbers from your site? Maybe this onslaught of inflation will up the numbers.