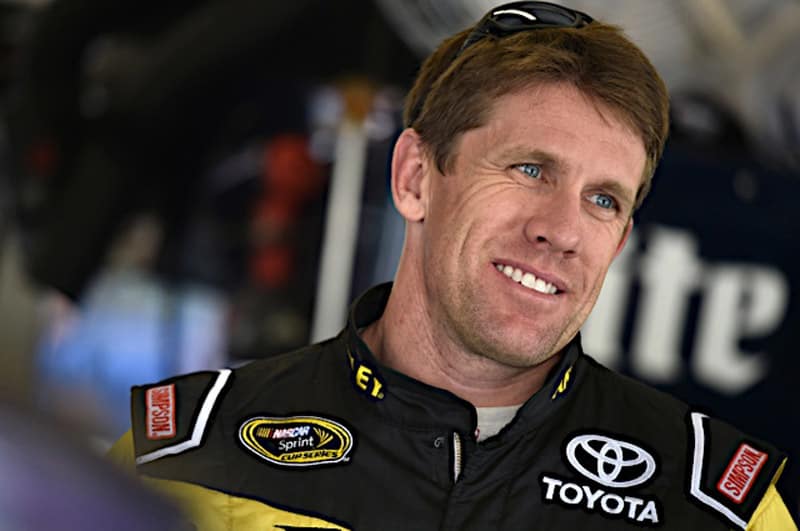 In music journalism, there’s a subset of news that’s not terribly common but ever present nonetheless. It usually surrounds a veteran artist or band who hasn’t done x thing in a while — release an album, reunite with the old band, get back on speaking terms with a former collaborator, etc.

System of a Down fans can count on a few interviews a year where the interviewer asks if the band is ever going to put aside its differences and record a follow-up to 2006’s Hypnotize. The members of Talking Heads have been putting out solo material for decades, but David Byrne’s always going to be posed the “will the band ever get back together?” question. Paul Simon’s retired from touring at this point, and yet the age-old Simon & Garfunkel reunion question is probably going to remain over the next few years.

NASCAR’s closest cousin to this content format is Carl Edwards. What’s he up to? Is he running for Congress anytime soon? Will he ever get back in a racecar?

His at least once-yearly return to the NASCAR news cycle occurred late last week, when Edwards appeared on NASCAR Race Hub to chat about what he’s been doing since last we heard from him — and, of course, whether or not an emergence from retirement is in his future.

I’ve got a conflicting opinion here, so buckle up.

First, it may seem like this is heading that way, but in no way can one fault NASCAR Race Hub for the possibility of Edwards returning to the sport coming up in the interview. As with asking Art Garfunkel whether or not Simon & Garfunkel is getting back together, you’re almost certain the answer is no or is at least the same stock answer he and Simon have given for decades, but there’s always the minimal chance someone might say something incendiary — whether it’s “yeah, we’ve discussed it” after years of saying they never would, giving some other juicy nugget of information tangentially related to it, whatever.

Same thing with Edwards. The reason coming out of retirement wouldn’t come up as much with, say, Rusty Wallace or Mark Martin is because they were older by the time they stepped away (and in some cases clearly past their prime on the track); in a sport mostly populated by drivers in their 20s to 40s, asking someone nearing or in their 50s if they plan to come back is probably not going to be a fruitful endeavor. Edwards, on the other hand, retired when he was 37 and will turn 42 in August. That’d put him as one of the NASCAR Cup Series’ elder statesmen at this point for sure, but plenty of racers have found success while older than Edwards is now.

What I think I fault more is the opinion that Carl Edwards should come out of retirement.

Like, again, there isn’t that much hurt in asking Edwards where he stands on NASCAR, especially when you tend to get him for an interview maybe once a year. But even outside weeks like this where he’s in the news cycle, you’ll find people asking why Edwards left, why he hasn’t come back to the sport, what could he possibly be doing instead and so on.

To an extent that’s a byproduct of the Internet. Social media provides glimpses into famous personalities’ everyday lives in ways never thought possible a decade and a half ago. Even retired competitors such as Martin remain seemingly an arm’s length from the sport thanks to posts on Twitter.

Edwards? No social media, which proliferates the questions about what he’s up to. Because who can say? Through his most recent interview, we learn he’s been sailing around the world. He’s long floated as a potential candidate for government in Missouri when it’s election time. He farms. But mostly, he stays out of the spotlight.

That’s a double-edged sword. On one hand, privacy. The other? If folks don’t know what he’s up to, there are less answers to why he’s not racing NASCAR (“Oh, it’s because he’s running for office,” “It’s because he’s got his hands full with this new business venture,” etc.).

But that’s still no one’s business — not what he’s doing now, and certainly not why he retired from NASCAR to begin with. We’re curious beings by nature, and it can be tough to rein that in, especially with a driver like Edwards who was a championship favorite in the 2016 Cup season and won three races that year, the most he’d earned in a single season since his nine-victory 2008. That, plus his general lack of a Cup championship trophy, made the retirement months later a truly shocking move, one that flared up every offseason for a few years there when, once again, Carl Edwards was not on a Cup team roster.

Edwards also competed in 12 full-time Cup seasons, no slouch in terms of doing the same thing for years upon years. He won 28 Cup races, plus 38 more in the Xfinity Series and six in the Camping World Truck Series. Most importantly, he’s up for the NASCAR Hall of Fame this year. To me, that says, hey, this guy had a full, robust career. One can sit around and ask what could have been if he’d stuck around, but on the merit of what he did in the meantime, he’s up for the Hall of Fame; it’s not like he did six seasons and bolted, left with maybe half the wins, and ends up the type who’s on the outside looking in as one of the sport’s greatest drivers simply because he didn’t have a prolonged track record of success. He had that! Well over a decade of it, in fact.

So why continue to say he should return? Why even try to understand the reason for his departure? If he woke up one day and said this wasn’t what he wanted to do with his life anymore, there’s no reason to continue on that way; life is short, and he’s got options as a public figure, anyway.

You can go ahead and believe the conspiracy theories about why he left Joe Gibbs Racing specifically, but those hold less water with every passing year, especially with his replacement now three teams removed from JGR. If he wanted out and would rather spend the nine-month period usually taken up by NASCAR at home in the exact same state, the exact same town or city, leaving family only when he really wants to, that’s his prerogative.

And if he comes back to NASCAR? Also his prerogative, whether that’s as a driver or as a broadcaster (which, one may recall, he wasn’t half bad at). His latest interview leaves the door open to some degree there, particularly on the road courses. That’d be required viewing from a sheer storyline standpoint, even if he couldn’t shake off the rust that’s been accumulating for a half decade and counting and end up finishing well off the pace.

It’s long past time, however, to stop questioning Edwards’ motives and whether or not he’ll ever be back in racing. Checking in to see how he’s doing and what he’s up to? Fine. Continuing to count the days until his return? Not so much.

Agree. Let him be. He left on his OWN terms to raise a family and enjoy life. I was never a huge fan of his because of his feint-punch at Kenseth but he sure could drive and I’d love to see him at an RC. Wouldn’t surprise me at all if he did COTA this year as a one-off, much like Jr does his one-offs each year. Let’s hurry and get back practice and qualifying too, on another note; it provides more value to a ticket purchased–and make it two rounds again with anyone with a charter on the outside going home. Be done with the guaranteed spots!

I was glad to see Edwards pop up in the news cycle. I wish NASCAR/Fox/NBC would make more effort to periodically catch up with other retired drivers (Martin, Wallace, Rudd, Marlin, Spencer, Elliott, etc.) that are no longer involved in NASCAR and are rarely seen. Like them or not, they were weekly fixtures in our lives for a long time.

I admired Edwards for knowing when he had had enough and getting off the merry-go-round instead of lingering around just to collect the paycheck. I hope he’s doing whatever he wants to. He’s earned it.

Bill Elliott has found the perfect solution to becoming relevant in today’s NASCAR world. He gets more attention from the media for being the Champion’s dad than he ever did as a driver. The media largely ignored him when he was driving, because he wasn’t controversial enough and did not seek out media attention.

I didn’t like him when he was driving. I haven’t missed him one bit since he’s been gone. And I hope he stays away.

This is a remarkably ridiculous take. No one held a gun to Edward’s head forcing him to appear on TV, where such questions are obviously going to be asked. And since he has no social media presence why would he care what anyone speculates or promotes conspiracy about?