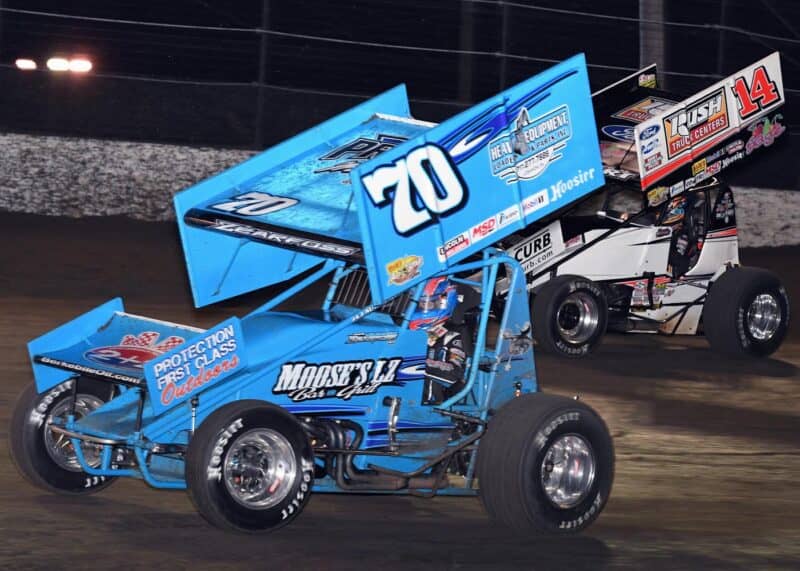 Jonathan Davenport is the hottest driver in dirt racing and the favorite to win the weekend’s upcoming Bristol Bash for the World of Outlaws Late Model Series. Big story, sure, but I’m frankly Bristol’ed out. Plus, thanks to the amazing work of the medical community, my parents are now both fully vaccinated, meaning today marked the end of our COVID bubble and my return home after 13 months living out of a suitcase.

So forgive me for going the quick hit route this week.

Last weekend I made a point to catch the “Last Dance” at Arizona Speedway, thinking that was going to be the very last race on one of the best dirt racing ovals in the United States. Fortunately, as chronicled in Sunday’s Thinkin’ article, the venue has a new lease on life that will allow the desert racing community to finish out the 2021 season while seeking a new home for dirt racing in the Phoenix area.

The story of said speedway will be fun to follow this spring. Expecting to be closed, the track staff went out and found work elsewhere, while selling off pieces of track equipment that likely will be needed now to carry on the racing season. Good problems to have, and hopefully our good friends at Flo Racing will turn their documentary cameras on the venue in the same vein of their excellent coverage of the soon-to-be-closed East Bay Raceway Park back in February.

Keeping a finger on the track’s social media, they posed an interesting question this weekend regarding sprint car racing that I went down a rabbit hole contemplating.

Should Sprint Car Racing be added to the Summer Olympics? #Olympics

It’s not like the question of making motorsport an Olympic sport hasn’t come up before. Rally racing has long been linked to a potential inclusion in the Olympic games. Road & Track actively contemplated the inclusion of Formula E for inclusion in the upcoming Olympics in Japan. And let’s not kid ourselves, seeing that the Olympics features competitive cycling events, motorsport has definitely been practiced in Olympic competition. Even if the judges were unaware/intentionally ignorant of the fact.

So why not add sprint car racing to the discussion? No, sprint cars are not the picture of environmental friendliness that Formula E’s vacuum cleaners on wheels are. And no, the footprint of sprint car racing is not as global as that of rally or Formula racing. But it’s not NASCAR either. Sprint cars have a well-established presence on three continents. Racing on dirt is not a foreign concept either; see rally racing on every continent on the planet.

The skill level to drive sprint cars is as high as there is in any form of motorsport. The physical demands to wheel a sprint car in competition are extreme, even if for a shorter period of time than in a Formula car. And given that sprint cars can run on the tight confines of a quarter mile as opposed to blocking off miles of city streets for a road course, it wouldn’t be particularly difficult to pull off hosting such an event. Plus, leaving a dirt track to rot after the games end would be less unsightly than the ghost town Olympic villages dotting many host countries.

We've seen it before in Athens, Sarajevo, Atlanta and Sochi.
10 years after the Beijing Olympics the venues are abandoned. Apparently people are growing vegetables near the finish line of the BMX track… pic.twitter.com/kAJpvh1YIF

There’s really no sporting argument to be made against including sprint car racing in such a form of competition. The Olympic games have long been a bastardized competition bloated with events that are either obscure to the point of absurdity or blatantly catering to commercial interests. If race-walking, trampoline gymnastics and bikini volleyball are worthy of gold medals, wheeling a 900-horsepower rocket ship certainly qualifies.

Would there be a benefit to the sport from such inclusion? Possibly. Considering that Olympic sports have proven at times capable of making Americans en masse take interest in obscure competition for the sole sake of the flag said competitors are flying, there’s no reason to think that bad fast racecars couldn’t do the same thing. Not to mention that the short, well, sprint races that are customary to sprint cars are perfectly suited both for the ever-shortening attention span of casual viewers (and for TV advertisers looking for segmented programming).

It may not happen this year, but motorsports in the Olympics will happen in my lifetime. Part of me simply hopes that if going down that road, it be a form of motorsport that’s worth becoming the face of motorsport to the world, not electric-powered power wheels driving on city streets as if in a luxury sedan commercial.

That’s not to say I’m advocating for it to happen. The last thing I’d ever want to see is sprint car racing dragged into a world of corporate sponsorship where the story behind competitors and the terrible hardships of life that still somehow saw them able to spend countless hours training and traveling to compete for a freaking medal is more important than their ability to compete in said sports. The day I start seeing casual fans following sprint car racing is the day I buy the Unabomber’s cabin, running out the clock on the porch with a shotgun keeping the outside world 60 feet away instead of six.

I hope sprint car racing stays on the fairgrounds and rustic ovals that it currently inhabits, as far from whatever city/country is stupid enough to buy what the Olympic games are selling every four years.

That’s not to say the sport’s not worthy of inclusion. But if it ain’t broke, don’t fix it.