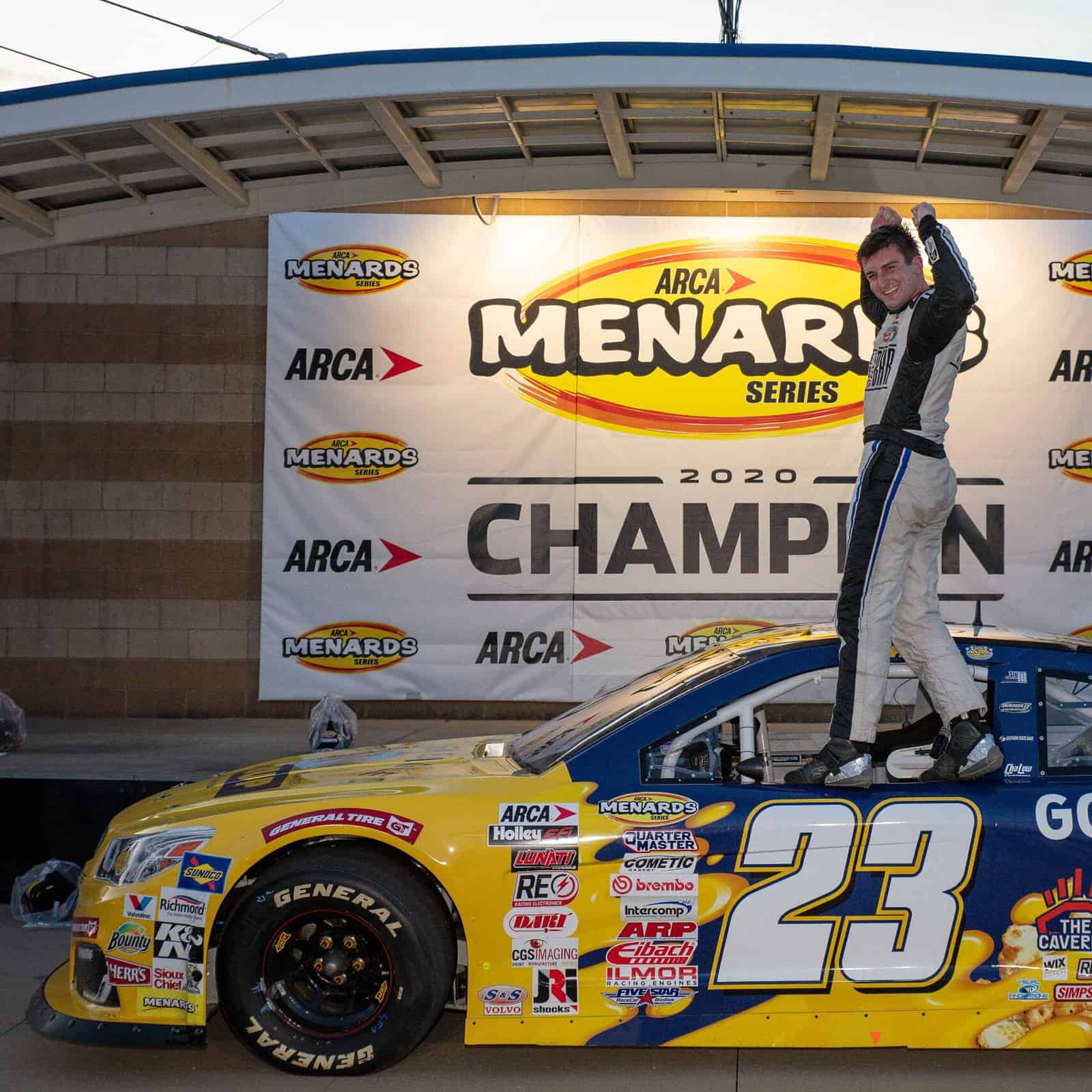 Entering the NASCAR Cup Series race at Martinsville Speedway on April 10, there has not yet been a two-time winner in the series this year. Parity also exists in the ARCA Menards Series, which completed two races before St. Patrick’s Day. There also has not been a back-to-back champion in the main ARCA series since Frank Kimmel, who won the title from 2000-2007 en route to 10 overall titles.

ARCA prides itself as a developmental series, as evidenced both by Ty Gibbs‘ victory in his NASCAR Xfinity Series debut at the Daytona International Speedway road course and its reigning champion Bret Holmes competing part-time in the NASCAR Camping World Truck Series. Some of the drivers since Kimmel’s reign ended in 2008 have enjoyed success in the NASCAR three national levels. Others have flamed out with mere appearances in those three series.

Of those 13 drivers, Buescher and Briscoe are the only two drivers racing full-time in the Cup Series. That’s two out of 13, or .153, far below the Mendoza line for us baseball fans with the season underway!

Dillon captured four wins between the Xfinity and Truck Series, leading to four full-time seasons in the Cup Series. After 164 career starts though, he mustered only two top fives and six top 10s. After last year, sponsor GEICO departed Germain Racing, the team folded, and Dillon was relegated to competing part-time in the Cup Series with Gaunt Brothers Racing and part-time Xfinity Series competition with Joe Gibbs Racing.

Dillon’s results thus far have been unsatisfactory. He failed to make the season-opening Daytona 500 and has zero Xfinity top 10s, embarrassing comparatively to Gibbs and Martin Truex Jr., who finished second after leading 103 laps in his first Xfinity start since 2010. Dillon made it to the top level in NASCAR, but he failed to prove his worthiness there.

Allgaier ran two full-time Cup Series seasons, but he has found a long-lasting home in the Xfinity Series with JR Motorsports. He has 15 career wins, including one this year, and finished second last year in the championship standings. Sponsor Brandt has remained loyal to him, so the 34-year-old veteran has been a contending fixture in the Xfinity Series. The 2009 ARCA champ, Allgaier may not be the poster child for ARCA drivers making it to the top level, but he has made a successful living as a professional race car driver nevertheless.

Of the others on that list, their highest success lies in the Truck Series. Two years after winning the ARCA title in 2018, Creed won the Truck Series crown last year on the strength of four wins. He remains with powerhouse GMS Racing, but his funding is questionable after Marcus Lemonis’ companies Camping World and Overton’s sponsored Creed twice this year. Nevertheless, as a talented 23-year-old, Creed should have the opportunity to continue climbing up the NASCAR developmental ladder.

Sixth on the all-time ARCA wins list, 2015 ARCA champ Enfinger enjoyed his career-best Truck Series season last year. He won four times, including the penultimate race at Martinsville, en route to a fourth-place finish in the championship standings. He has six wins, 36 top fives and 68 top 10s in 110 career Truck Series starts. Currently eighth in the point standings, Enfinger should be factored into the Truck Series playoff picture, right? Wrong – because he is not running full-time. On the heels of the second-most wins last year, Enfinger’s funding decreased, so he was relegated to part-time status and therefore is ineligible for the playoffs.

Enfinger should be celebrated as a hard-working driver who made it in NASCAR. He even returned last year to the ARCA Menards Series East race at Five Flags Speedway, where he led a race-high number of laps before ultimately finishing fifth. He found success in the Truck Series full-time with ThorSport Racing. Enfinger is a talented Truck Series wheelman, even being the subject of a Frontstretch Truckin’ Thursdays article. Sadly, Enfinger exemplifies the difference in racing from other major sports: talent does not always equate to the same caliber opportunities.

Enfinger shares the No. 98 Toyota with Eckes, who won the 2019 ARCA title despite missing one race due to illness. Fresh off his ARCA title, Eckes drove for the winningest Truck Series driver, Kyle Busch. Surprisingly, after making the playoffs in his rookie season – which was altered due to COVID-19 protocol – Eckes was let go from KBM. Only 20 years old, Eckes appeared to be a star in the making. ARCA title in hand, TRD support, driving for KBM, finished eighth in points, etc., only to be left running part-time. Eckes has two top 10s in his two Truck Series starts, but with only a part-time slate, his future in NASCAR is uncertain.

Now we are getting into ARCA champions with minimal success at best in NASCAR. Lofton for example won the 2009 ARCA title, leading him to three straight full-time Truck Series seasons. He accrued one win at Charlotte Motor Speedway, an eighth-place points finish in 2012, then he left to compete in the Stadium Super Trucks. While he nabbed three wins in 2013 in the Robby Gordon-owned series en route to a third-place finish, Lofton was done in NASCAR. In the ARCA Menards Series West season finale last year at Phoenix, he returned with a sixth-place finish. After the season, Lofton said he hoped to race more in ARCA, so his racing days might not be done.

Theriault won the 2017 ARCA championship for Ken Schrader thanks to seven victories. Since then, he has made seven starts across the three NASCAR series with one top-10 finish in a Truck Series start in 2018. He debuted in the Cup Series in 2019, making five starts, but he has not competed since. Only 27 years old, it is hard to believe Theriault does not regularly compete in a series, but alas, he remains on the sidelines.

Combined, Sheltra and Mitchell tallied six Xfinity Series and three Truck Series starts. Sheltra will turn 35 on May 14 and Mitchell will turn 27 on June 25. What are those two doing now? Sources told Frontstretch Sheltra has essentially retired from racing after owning a team in 2011. He currently resides in his hometown of Indiantown, Florida where he runs a family-owned business.

Mitchell told Frontstretch he primarily has built a small business that invests in real estate, though he affirms he is not a realtor. An entrepreneur, he is also involved in developing some other startup businesses. Younger than yours truly, Mitchell stopped racing due to a lack of funding. He reiterates though, “I never retired or hung up the helmet.” Perhaps Mitchell’s business success will help him climb back into the cockpit at a race track again in the future.

A tagline for the Xfinity Series is “Names Are Made Here.” The line is also applicable to ARCA. Some of its champions have found success in NASCAR whereas others have vanished, as it is said in The Shawshank Redemption, like a fart in the wind.

thank you for highlighting ARCA. I’m a guy that misses the ASA and DASH series so this was refreshing.

Ahhh, I see the issue. A lot of talented drivers get “hurried” through the system. They only run a couple of ARCA races & don’t compete for the championship. Remember the “ABC” system that Ryan Newman started? There are some quality names coming through the ARCA Series that are now in Trucks/Xfinity, though.