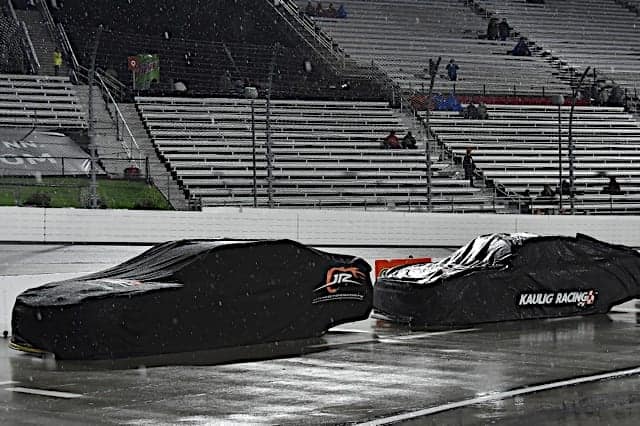 The NASCAR Xfinity Series Cook-Out 250 at Martinsville Speedway has been postponed until Sunday, April 11 following a Friday night rain delay that persisted for three hours. The race will resume at 12 p.m. ET with television coverage provided by FOX Sports 1.

91 of 250 laps were complete in this NXS event before rain washed out the rest of the racing Friday night. Brandon Jones held the lead with Josh Berry, Daniel Hemric, Brett Moffitt and Jeb Burton completing the top 5. Noah Gragson collected 10 playoff points for winning stage one.

After rain also delayed the initial start, this event went green under the lights in Martinsville with more inclement weather looming in the distance. Harrison Burton started from pole with Atlanta Motor Speedway winner Justin Allgaier joining him on the front row as the NXS resumed after a two-week layoff.

The start of the race lacked rhythm, with stage one posting five caution flags, all for single-car spins.

Short track specialist Josh Berry managed to overtake leader Brandon Jones on lap 28 of stage two, much to the delight of the limited-capacity crowd at the speedway. Jones and Berry continued to battle for the lead until precipitation in the area brought out the caution flag, with the red flag following quickly thereafter after 9:30 p.m. ET.

Working against a rather rainy forecast of April 10 for the Martinsville area, NASCAR made persistent efforts, through multiple bouts of rain, to dry the track before ultimately deciding to postpone the race. The forecast is no better for the Cup event Saturday night with a 90% chance of rain for its scheduled start time of 8 p.m. ET.

Gee! Rain at a NA$CAR event. Imagine that!

Maybe they shouldn’t have had that test with the rain tires?