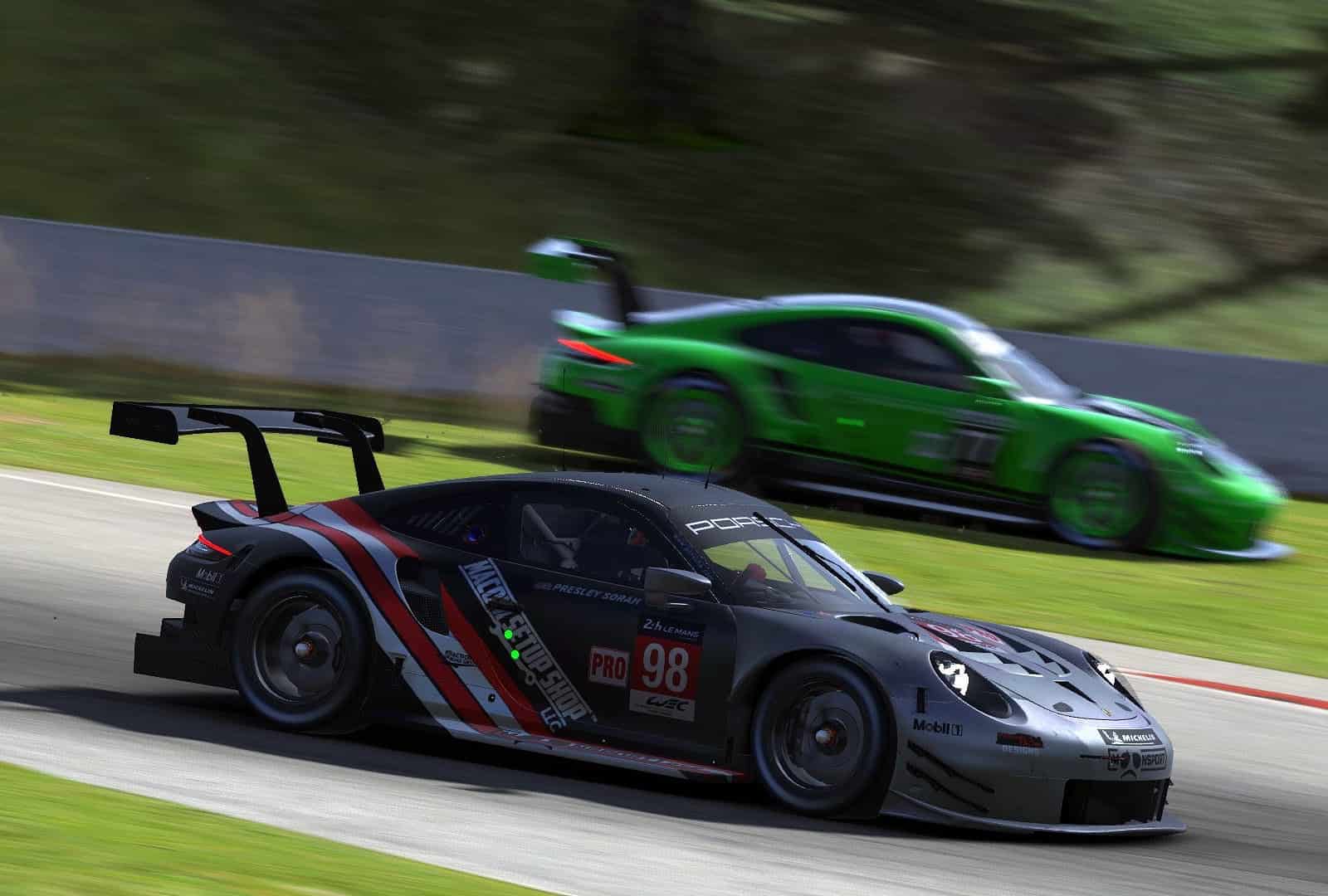 Sure, The Virtual Frontstretch is a weekly collection of updates regarding the simulated racing world. But what happens when you take a virtual racing series and turn those drivers loose on a real track?

Monday Night Racing answered that question this past week with a go-kart endurance race at GoPro Motorplex on Wednesday night (April 7). It was a special event for the league coinciding with an awards ceremony for the second season champion, Will Rodgers.

The real race pinned drivers on teams of two with drivers switching out every 15 minutes. The duo of Rodgers and Nick Sanchez took the win, edging out the pairing of Garrett Smithley and Ryan Vargas. More from that race will come later this week on Frontstretch, including first-hand accounts from two of us who competed in the event. Stay tuned.

Besides the sim-to-reality race, there were plenty of other virtual leagues in action. MNR’s sister series run by Anthony Alfredo went road course racing north of the border. The Mooncar Premier Series finally officially kicked off with two races last week, a pair of superspeedway events in different vehicles on Monday and Wednesday nights. And the eNASCAR iRacing Road-to-Pro Series returned for their first short track action of 2021 at “The Action Track”, Richmond Raceway.

Also worth noting, another iRacing patch released over the week updated track parameters for Richmond just days before the Road-to-Pro race. The New Damage Model was re-enabled for the Street Stock, and the NASCAR Cup Series windshield banners will now feature a driver’s last name as it appears in real life.

Utilizing a page from the Monday Night Racing books, the second race in ERL’s five-race mini-season featured a 50-minute event at Mosport between a handful of Porsche 991 RSR vehicles.

Presley Sorah took control of the night, winning in practice and taking the pole position for the event, but Adam Cabot proved to be a worthy challenger throughout the night.

Cabot took the lead early while Sorah fell back to third place. Cabot led until about the 20-minute mark, where he slid off the course and lost multiple positions. With a midway caution break to pack things back up, the majority of the race was about minimizing mistakes without any other caution periods on the night.

Brandon Key wasn’t able to back up his win at Richmond, finding trouble before halfway en route to a 15th-place finish. With Key’s early issues, the remaining Richmond podium finishers of Cabot and Sorah could capitalize.

After the break, Cabot was able to take the lead back right away but couldn’t hold it before Sorah was back in control. Cabot then went off track a few more times, falling back to fourth in the final rundown. Sorah kept it clean and took his first victory of the season while also claiming the points lead after two races.

WOOO! Got my first @ERLracing win tonight at @CTMPOfficial! I also took over the points lead tonight! Just need to stay consistent to give myself a good shot at @MonNightRacing. I didn't even have the car until last Wednesday, had to put in a lot of laps but it was worth it! 1/2 pic.twitter.com/oxV6itjayY

Just before the start of the series, Series Director Travis Brown was able to sign on Sim Racing Loft as the title sponsor of the Mooncar Premier Series in its inaugural season.

The first race saw old trucks on a newer Daytona, and it was Colin Bauer who took the pole position. 57 drivers attempted to qualify for the first race of the season, but only 43 could start.

Coming to the white flag, Dawson Hess took a look on the outside of Michael P. Frisch for the lead. As they crossed the line, Frisch moved up and the contact triggered a gigantic incident. Frisch, Bryce Andrus and Dylan Holland were the only trucks to make it through. As they rounded the final corner, Holland took a look on Frisch, but Frisch held on to take the first victory of the season.

What a night! Congratulations to @PFrisch_ for bringing home the Win!

Thanks to everyone for following along!

Frisch was a dominant driver again in the second event, but wasn’t able to double up his wins in as many events. One of the best in the 1987 vehicles, Blake McCandless wheeled his virtual vintage vehicle to the pole position, After a clean start, for the most part, Michael Cosey Jr. was able to lead the first trip around the Talladega track. Rudy Valentin led a few laps here and there, but once Frisch got to the top spot, he never found himself outside of the top 3 through the initial 35 circuits.

Everything changed on the final laps, as Frisch was put somewhere in the middle of a four-wide battle down the backstretch with Tyler Oneal, Ashton Schleiss and Shawn M. Butler. Oneal’s internet connection went south for a split second coming to the line. As the field wrecked behind, Oneal reappeared and crossed the line ahead of Presley Sorah. Kris Mulhall survived the carnage to wind up in third.

Watch both the first and second race replays over on MoonVision.

As mentioned above, iRacing released a patch last week just a few days before the third race of the eNASCAR iRacing Road-to-Pro Series race at Richmond Raceway. The patch updated track parameters for the venue, making the lanes more equal in an attempt to promote better and more realistic racing.

As teams scrambled to make last-minute adjustments to their setups, it was Spacestation Gaming who collectively came out on top of the top two splits of the night. Kollin Keister and Collin Bowden both brought their respective SSG Fords into virtual victory lane after 200 laps of racing around “The Action Track”.

As it stands, Keister leads the overall standings over Darik Bourdeau when a drop is taken into effect. Otherwise, the two share the same amount of points through three races. The top 70 drivers after eight events will advance to the next round, but first, the series has to navigate the treacherous turns of Talladega Superspeedway.

KOLLIN KEISTER GETS THE WIN!

Coming Up This Week

100% Cup Series is at Martinsville Speedway this week, Saturday night at 8:30 p.m. ET on 3 Wide TV for 500 laps around the virtual paperclip.

The Esports Racing League will be back on Monday night at 8:00 p.m. ET on Podium eSports.This week, the series will take to the legacy Car of Tomorrow at Kansas Speedway.

The Mooncar Premier Series will be live on MoonVision throughout the week. It was expected to run on Saturday night this week at Bristol Dirt in the 410 Winged Sprint Cars, but that race was moved due to the real NASCAR Cup race at Martinsville. Expect racing on Monday, Wednesday and Saturday nights.