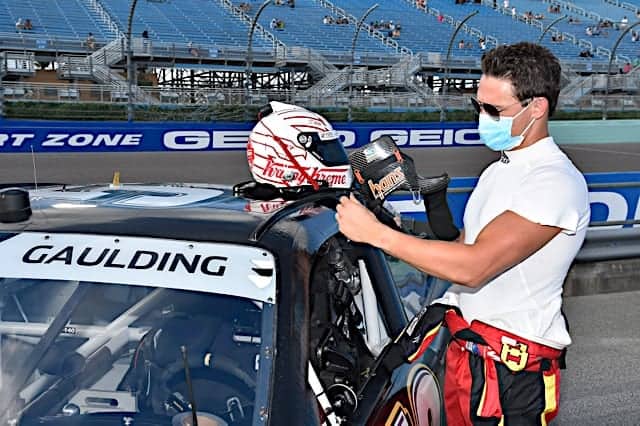 Tempers flared after an on-track incident with 75 laps remaining in which Gaulding got into Graf from behind. Graf, who was racing with Blaine Perkins, spun out while both his and Perkins’ cars suffered major damage after hitting the wall.

After the race, Graf approached his former SS Green Light Racing teammate to discuss the incident. Things heated up and the two tangled in the garage. A NASCAR official separated them and they were both called to the hauler.

Later, Graf and Gaulding called into SiriusXM NASCAR radio to discuss their point of view.

“I 100 percent wrecked him on purpose because I’m tired of dealing with his nonsense,” Gaulding said. “The reason why I stand by that is because earlier in the race, about 30 laps in, I was just running on the outside (line), there’s nowhere to go, and I just get body-slammed, and it was the 07. And then, when he was going by me, he door-slammed me. So I told my spotter, I said when I get back to the 07, he’s done, and I stood by that. I’m not going to stand by here and sugar-coat it, I 100 percent wrecked him and I don’t regret one thing I did.

“I’d do it all over again because the way that guy races, it’s actually comical watching him drive because his equipment is very good. I drove that equipment, and I think there’s a lot of jealousy there. I personally think so because he hasn’t sniffed the results that I had with Bobby Dotter and SS Green Light Racing since he’s been there. I think it’s kind of funny that he’s got that chip on his shoulder with me and you can tell with the way he races on the racetrack.”

Gaulding went on to describe how he intentionally wrecked Graf: “When I came off of turn 2, he cut me off for the last time. I came up the corner and I never hit the brakes. He was my brake.”

As for Graf’s side of things, the driver said he went to talk with Gaulding after the race.

“There with about 75 laps to go, Gray just wrecked us and [Perkins], drove us off into the corner and flat out-wrecked us, ending our day,” Graf told the radio station. “I went to have words with him afterward and then he mouthed off to me and there were some punches thrown. I landed a couple.

“The garage is just loaded with drivers who pretend they’re tough, but they’re going to find out how tough they are if they race me like that and then run their mouth at me. Just ask Gray how he’s doing now. I’m sure he needs some ice packs.”

Gaulding described how the fight escalated.

“I was just walking back to the hauler and [Graf] starts cussing me out,” Gaulding said. “I literally started laughing. I think that’s what made him upset. I was laughing because he’s very awkward, and I didn’t know if he was serious or not.

“When we were done talking, he started swinging. What’s kind of funny to me is like if we want to scrap and you want to fight, let’s go right now. You give me the look, we’ll go. I thought we were leaving the conversation. All of a sudden, he glazed my head, which I was not phased by that at all. So, I tackled him and we went on the ground. Obviously, all the officials did their work.

“It’s really funny … I have to say to the poor kid, he’s got a lot to learn. When you drive the way he’s currently driving, he’s going to get wrecked. I’m very, very happy that I was the one to wreck him today.”

Graf responded to Gaulding’s comments on Twitter shortly after the driver gave his side on the radio.

Jeez, listening to Gray talk @SiriusXMNASCAR he talks like he is Dale Earnhardt. Gray is 38th in points and has no top 20 finishes no lead lap finishes. And I am in his way…lol

Gaulding’s No. 52 car of Means Motorsports ended the race 21st, while Graf’s No. 7 was wrecked out in 38th.

There were no penalties reported after the race. However, both drivers were spoken to by NASCAR, with Gaulding claiming he needed to be “escorted out.” The duo will race together again in two weeks as the series heads to Talladega Superspeedway, one of the sport’s fastest tracks and a place where any retaliation could prove highly dangerous.