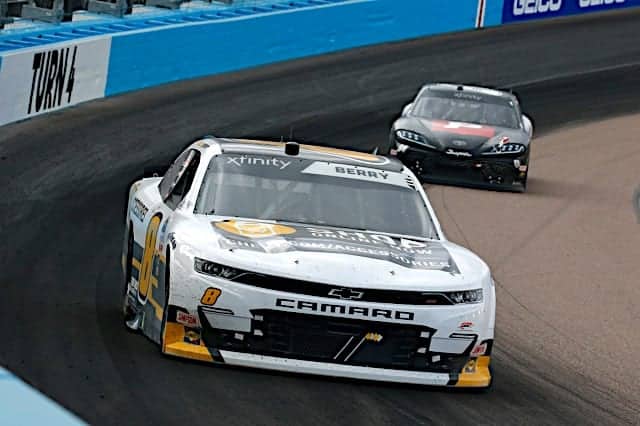 It took almost 48 hours, but for Josh Berry, the NASCAR Xfinity Series’ Cook Out 250 was worth the wait at Martinsville Speedway.

In his fifth season competing part-time in the sport’s penultimate level, Berry emerged from a Friday night rain delay with the fastest car Sunday (April 11) to win in his 13th career NXS start. The longtime late model star showcased his prowess in those divisions by leading a race-high 95 of 250 laps to deliver the first win for JR Motorsports’ No. 8 car since Dale Earnhardt Jr. himself did it at Michigan International Speedway in 2006.

“I guess they like me here,” Berry said after responding to the crowd’s cheers with an enthusiastic whoop. “I have so many people to thank, I could be here until tomorrow morning, [for helping] me get here… man, I wanted to win so bad for these guys.”

Congratulations to @joshberry and the No. 8 team! @DaleJr knew he could get it done. pic.twitter.com/ZgI3iVAq51

Bad luck had pervaded a rollercoaster start for the JR Motorsports driver in 2021. Berry crashed out to a 27th-place finish at Daytona before reeling off two straight top-10 finishes. That was followed by another wreck and Berry giving the double bird to Santino Ferrucci at Phoenix, and then a violent, two-wheel incident at Atlanta Motor Speedway that ruined his day. Berry hit the infield grass at the track and the car essentially did a wheelie, the impact buckling the entire body of his Chevrolet before it came crashing back down amid a shower of grass.

.@joshberry spins, and the No. 8 car suffers heavy damage in the @amsupdates infield. pic.twitter.com/mLfJG5GxUV

This time, there would be no bad ending for Berry. He held off challenges from Ty Gibbs and Noah Gragson to secure the win at Martinsville, a victory that was days in the making after rain caused the postponement of the race after its first 91 laps.

Defending winner Harrison Burton led every early lap on Friday, through nearly 50 circuits, but elected to come to pit road and surrendered the top spot to Gragson. Gragson went on to win the opening stage after a multi-car crash involving Riley Herbst, Alex Labbe and others forced the segment to conclude under caution.

Berry led for the first time on lap 79 but was quickly passed by Brandon Jones, who was out front when the red flag waved Friday night for rain. NASCAR tried to wait out Mother Nature’s wrath but was inevitably forced to push the race to Sunday at noon Eastern.

Daniel Hemric took the lead late in stage two once the race finally resumed, winning that stage, but Berry soon retook the top spot and set sail. At one point, Ty Gibbs snuck up and took the lead with 56 laps to go, only for Berry to chase him back down.

The No. 8 retook control of the race and never gave it up as the field battled behind him, winning by about a half-second despite lapped traffic hindering his progress.

Hemric and Gragson, who had scuffles with their cars and fists at Atlanta three weeks ago, battled for the runner-up position before Gragson took it at the checkered flag. No one could touch Berry, who won by more than half a second to the delight of the owner who stuck his neck out to put him in the ride, Dale Earnhardt Jr.

Been a long time since I cried so hard. ???
It’s great to see my friend @joshberry live his dream.
Great job @taylorcmoyer and the boys for putting him in position.@MartinsvilleSwy is a special place.??@JRMotorsports is on a roll. ??

“I knew this would be a good opportunity to win, but [crew chief] Taylor [Moyer] called a perfect race,” Berry said in his post-race interview. “The car was good and we just kept tweaking on it. The tires were pretty worn out there at the end, I was struggling a little bit with wheel hop, kept going back and forth on the brake lever, trying to help it on one end.”

Berry paused as teammate Gragson came up to congratulate him before turning to the short track background that got him to this point.

“This [win] is for all those guys,” Berry added, referring to late-model racers all around the country. “There’s a ton of them out there that are like me, that have won here and all these great short tracks around here. We can do it, we just need the opportunities. Today proved it. Yeah, it’s a short track, but it’s still damn hard to win here. And we did it.”

Congratulations to @joshberry and the No. 8 team! @DaleJr knew he could get it done. pic.twitter.com/ZgI3iVAq51

The race was also marred by its typical assortment of single-car incidents, and a number of drivers had issues with their own cars as well. A flat tire for AJ Allmendinger set him back Friday night, but he rebounded to finish inside the top 15. Riley Herbst suffered a flat tire of his own during the Sunday portion, winding up two laps down in 29th position.

The short track gave way to short tempers as well, as Gray Gaulding and Joe Graf Jr. had a dust-up in the garage after the race. Video showed the two scuffling on the ground before being separated; frustration boiled over after the two made contact in-race, wrecking Graf’s No. 07 beyond repair on lap 177.

Gragson, Hemric, Gibbs and Jones rounded out the top five in Sunday’s finish. For Gragson, he received a $100,000 consolation prize as the winner of the first 2021 installment of the NASCAR Xfinity Series Dash4Cash, outlasting Burton, Justin Allgaier and Allmendinger to take the money.

Austin Cindric, Harrison Burton, Justin Haley, Allgaier and Michael Annett completed the top 10. Annett recovered to record that top-10 finish after spinning out during the initial portion of the race Friday night.

The Xfinity Series now has a week off before heading south to Talladega Superspeedway. The Apr. 24 Ag-Pro 300 will fire off around 4 p.m. ET with television coverage provided by FOX.