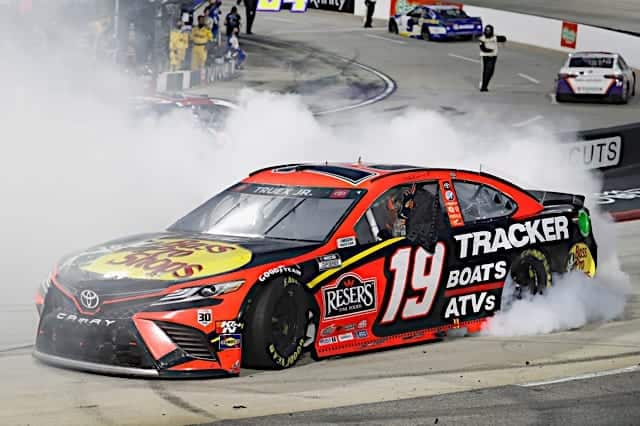 Martin Truex Jr. has become quite the Martinsville expert.

Truex hunted down Joe Gibbs Racing teammate Denny Hamlin and passed him for the lead with 20 laps to go in Sunday (April 11) afternoon’s Blue-Emu Fast Pain Relief 500 at Martinsville Speedway, successfully defending his title as the spring race winner from 2020.

He has also finished in the top 10 in seven of the past eight events at the Virginia short track, and had led more than 100 laps in each of the past three races heading into the spring 2021 race. He ran in the top five for most of the evening after rain forced the race’s postponement from Saturday night (April 10), but the No. 19 didn’t really come to life until late.

Truex and Hamlin battled hard during the closing laps, with Truex finally getting by his teammate for the win.

“It’s always difficult,” Truex said of the battle. “We try to race hard, race clean, he was making it difficult on me. I was loose coming off the corners and his car got tight, so we kind of had opposite things going on, and it made it difficult to pass. But we played nice and Coach (Joe Gibbs) will be happy, and it’ll be a cordial meeting tomorrow.”

JGR as a whole also led more than 300 laps during the race, while a potential race-winning run from Ryan Blaney slipped away from the No. 12 after a speeding penalty derailed those hopes.

Joey Logano, two weeks removed from his win on the dirt at Bristol, led the opening lap but quickly faded dropped back: Hamlin was his successor, leading all the way to the stoppage for rain on lap 43.

Drama unfolded before the precipitation put things on hold, though, when Rick Ware Racing teammates Cody Ware and James Davison made contact. Davison’s No. 15 ended up in the wall, and his anger at the younger Ware was evident after the fact.

"So ridiculous, he's wrecking one of his father's cars."#NASCAR #BlueEmu500

It didn’t take long for things to pick up when the race resumed more than 12 hours later. Kurt Busch‘s No. 1 Chevrolet went around off the bumper of Erik Jones, causing a caution after just a few moments of racing.

Blaney, with six of his past seven races at the short track resulting in a top 10 and back-to-back runner-up finishes there in 2020, took control of the race on lap 77 and never looked back, at least for a while. The No. 12 swept both stages a few hours after broadcasting the Xfinity Series’ rain-postponed race, which started at noon. He had to hold off Hamlin for the second victory though, with the No. 11 getting a huge run on Blaney out of the final turn.

Ware ended up bringing out a pair of cautions during the afternoon, as well.

Later in the race, Bubba Wallace and Ryan Newman both stayed out and it paid off, the pair catching a caution and remaining in the top 10. They were the benefactors of a Kyle Busch spin, and found themselves together again during a stack-up in the top 10. Newman went around during the scuffle after contact from the No. 23.

The race had been relatively calm, with incidents involving a couple of cars here and there, but mayhem struck on the backstretch with less than 150 laps to go.

A massive crash brought out the red flag on lap 115, when Kyle Busch and Chris Buescher spun in tandem down the backstretch. The blockage caused a 15-car pileup that ended the days of Brad Keselowski, Daniel Suarez and several others.

The BIG One strikes at NASCAR's shortest track. ? pic.twitter.com/HzaFAbWojJ

Once the red flag lifted, it was largely a battle between Hamlin and Blaney, with Truex in tow in third.

The caution flew with less than 50 laps to go for Chase Briscoe, who spun around while running in the top 20, and gave way to a round of pit stops. Blaney’s day came crashing down with a pit road penalty, though, as the No. 12  looked for his third straight runner-up and fifth straight top-five effort at Martinsville.

On the flip side of things, Truex leapfrogged into the lead on pit road, but Hamlin grabbed it back on the restart. Truex chased him back down, passed the No. 11 after a heated but contact-less battle over the course of a dozen or so laps and set sail en route to the win.

A masterful pass by @MartinTruex_Jr gets him the top spot with 15 to go at @MartinsvilleSwy! pic.twitter.com/AHSlT2jCQQ

“It was pretty incredible at the end there,” Truex said in his post-race interview. “…We never could get it the way we wanted it and it started getting dark and she came to life… I can’t believe we won here again. Did not had the dominant car today, for sure, but that was a lot of fun racing with Denny. We raced clean and we were able to come out on top.”

The Cup Series heads about 180 miles northeast to Richmond Raceway next week, where the Toyota Owners 400 will once again take place after last year’s spring event in the Commonwealth was canceled due to COVID-19. Truex Jr. is the defending winner of the spring event and, like Martinsville, has won two of the past three races there, while Keselowski is the most recent to go to victory lane after last fall. The 2021 spring race is set for Sunday, April 18 at 3 p.m. ET on FOX.

Good job, got bubba’s name in there twice. But why !

Bubba is one of the faces of NA$CAR. See the Cup Series Brand Picture. Also Bubba did lead some laps in this race.
But seriously, I understand what you’re saying.