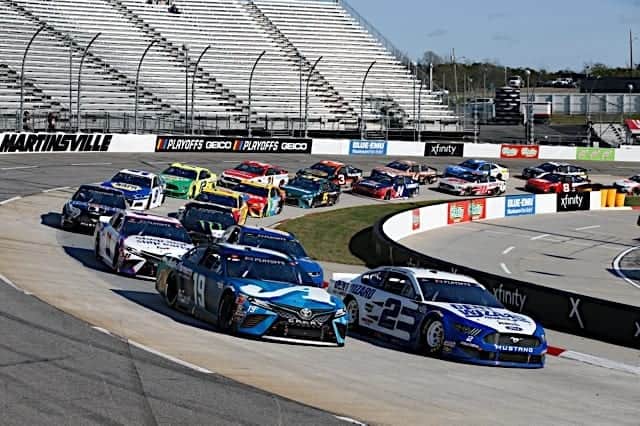 Everything hit the fan with 115 laps remaining in the Blue-Emu Maximum Pain Relief 500 at Martinsville Speedway.

The Cup Series race, which was pushed to Sunday after rain stopped the event Saturday night, had largely run incident-free, or at least without incidents that involved a large number of cars, up until 115 to go, when Chris Buescher and Kyle Busch made contact exiting turn 2. Both cars spun in tandem, creating a massive roadblock for the rest of the field behind them.

Buescher and Busch, running 17th and 18th, respectively, both received damage, as did everyone who piled into the mayhem: Erik Jones, Matt DiBenedetto and Cole Custer made up the first batch of victims. They were followed by Brad Keselowski, Alex Bowman, Anthony Alfredo, Michael McDowell, Justin Haley, Cody Ware and Aric Almirola. Ryan Preece and Daniel Suarez didn’t escape punishment either, as both cars ended up with fire and smoke billowing from their hoods.

Suarez wasn’t pleased with William Byron, showing his displeasure in the aftermath and throwing a water bottle at the No. 24.

A fiery end to Daniel Suárez' day in Martinsville.

His day, along with those of McDowell, Keselowski, Bowman, Haley and Preece, ended up in the garages after the crash.

Denny Hamlin was leading at the time of the melee, followed by Christopher Bell and Ryan Blaney.

Does NASCAR still hold Races? I have not watched a NASCAR Race in over two Years. When they got involved in all wrong Race problems, I turned a Blind Eye. The Glorious Days of NASCAR are over. A Sport that started in the South and based on Southern Culture has been disassembled like a Blown Engine. With no Butts in the Seats, and no Race coverage on free TV, who is paying the Bills for all those Owners. I once attended at least two Races a Year, but I do not even turn in. While you are commenting on this Post you can tell me who won the Championship last Year, or the Daytona Rase the Spring. Both Races were considered National Holidays by me but today they are just another Day.

Tom B
Reply to  Leroy

How about proof reading or spell check.

You are 100 percent right, you hit the nail on the head. When they took the confederate flag away where you can’t fly it at the nascar race track, That was the end of NASCAR for me . That flag was part of our United State’s History.

I miss seeing the Stars and Bars flying in the infield. PC is slowly killing this country.