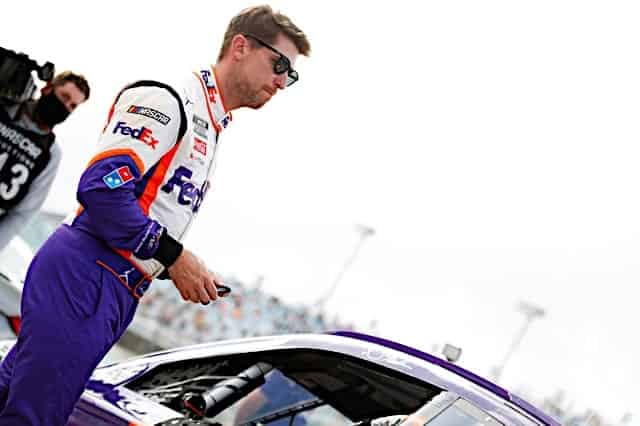 In the end, after leading a race-best 276 laps, Denny Hamlin had to settle for another third place finish — his fourth of the year — at Martinsville this past weekend. The result was Hamlin’s seventh top five in eight attempts, with his other finish still being an 11th-place run that were it not for pit road penalties, would almost certainly have been another top 5. Hamlin’s metronomic consistency has seen him establish a 76-point lead over second place and two-time 2021 winner Martin Truex Jr. — a whopping 194 points above the playoff cutoff. In a season where victories are being spread around, the 15 bonus points for winning the regular season portion of the year could be hugely significant.

What’s interesting here, though, is the race-by-race execution as Hamlin notes: “It’s just been amazing the execution that our team has had over the first eight races. It’s hard to be disappointed with that. We’re executing phenomenal. We just haven’t had that dominant car that we’ve had a few times last year that we just beat up on everyone. We just haven’t had that car yet. We’ve just been next best.”

No-one has won more at the Cup than Hamlin over the last two seasons, so you have to feel the elusive W is just around the corner. Regardless, he’s running very well, and in a long season that’s just what you need.

After just a solitary visit in 2020, this Sunday we head to the three-quarter-mile Richmond Raceway for a return to the tradition of two races a year at this fantastic track. This will be Richmond Cup race 129, a remarkable streak that runs all the way back to 1953 and a race won by none other than Lee Petty.

In the solitary playoff race last season, Brad Keselowski led a tick under half the laps in a stout performance that had many predicting he would run away with it at Phoenix. Kyle Busch holds the active lead with six victories.  Kevin Harvick and Hamlin have three apiece. Keselowski, Joey Logano, Kurt Busch and Truex Jr. each have two victories, while Kyle Larson and Ryan Newman each have one win.

Worth noting, too, is that Hamlin has the most laps led (1704), 216 circuits more than next-closest Kyle Busch. Hamlin has done everything but win this season, and while his last win at the venue came in the fall of 2016, maybe this is the weekend he officially books his spot in the playoffs with the hitherto elusive win.

For just about the entirety of the Formula One turbo-hybrid era, Mercedes has had the dominant upper hand. Sure, other teams and drivers have won races here and there, but the title and the constructor’s championship were the sole preserve of the German automaker. But after an absolute belter of a first F1 race in Bahrain, and initial signs in the shortened pre-season test, what’s immediately clear is that Red Bull are absolutely for real, and despite Lewis Hamilton’s victory, look to be the team with the most speed.

In NASCAR, the fastest car typically wins only about 40% of the time. Take it from Juan Pablo Montoya, a driver who has won in both disciplines, who pointed out that, “In F1, now as then, the driver with the fastest car wins, period.”

The reality is only Hamilton could have done what he did to win the first race of the year. The seven-time champion is indeed something of a unicorn — a driving legend amongst driving legends — and while he got it done in Bahrain, he won’t be able to do that every week, especially if Red Bull continues to protect their speed advantage. All that being said, Max Verstappen vs. Hamilton is the sort of battle that should have F1 fans salivating the world over. Bring it on this weekend.

At long last, the 2021 NTT IndyCar Series season gets underway this Sunday at beautiful Barber Motorsports Park in Birmingham, Alabama. It’s a 17-race calendar, including two doubleheader weekends: Texas Motor Speedway and the Streets of Detroit road course, with the Indy 500 restored to its rightful Memorial Day Sunday slot.

At the business end of the field, defending champion Scott Dixon, who led wire to wire in the points last season, is looking for a record-equaling seventh title, and he can expect forthright competition from Alexander Rossi and Josef Newgarden, to name but two.

Alongside the quest for the title, the other interesting element will be perhaps the most experienced and impressive rookie of the year class in the history of any form of motorsports. The field includes seven-time NASCAR champion Jimmie Johnson, 10-year veteran of F1 Romain Grosjean, and Scott McLaughlin, the back-to-back-to-back Australian Supercars champion and a top follow on Twitter as he navigates American culture and customs. Definitely give IndyCar a look if you haven’t before. It might just surprise you.

And finally this week, I wanted to shout out a great piece of Twitter content from Toyota Racing where drivers attempt to name Taylor Swift songs in time with T-Swift releasing new music:

Taylor Swift dropped some ? today! How many #TeamToyota drivers can name her songs? pic.twitter.com/hvBYUVs5du

Now while my much better half tolerates my NASCAR obsession, I’m very careful in what I share — my window of opportunity here is open by a sliver at best. But this was one I confidently sent knowing she would absolutely love it. I wasn’t wrong, which is a nice change — I kid, I kid. There aren’t many crossovers for me and my wife with NASCAR, so when I get one, I’m holding on to it and maximizing the content. Great stuff.

Lol that Toyota piece is hilarious and bet Taylor has seen it. Once again, great coverage and interesting content from Frontstretch.

Denny will win a race this year for sure. And really i dont even care if he ever wins again and most of all i dont know why i dont like him lol. I think bc he never paid his dues always drove for competitive teams even when he started in the old bush series. So as far as im concerned with all the great rides he has had, if he was such a great driver he would have had multiple championships.