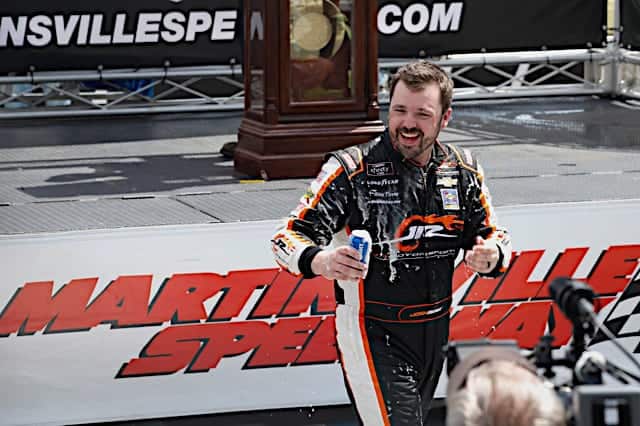 Update (April 12, 10:45 a.m. ET): It sounds like Camping World sponsorship for Josh Berry at Talladega Superspeedway may be a go.

Just hours after earning his first career Xfinity Series win, Josh Berry has a new sponsor knocking on his door.

Camping World CEO Marcus Lemonis tweeted late Sunday night (April 11) he would be willing to sponsor Berry at Talladega Superspeedway on Saturday, April 24 following Berry’s victory in the Cook Out 250 at Martinsville Speedway.

Winner winner @joshberry how about a @TALLADEGA dinner.. @NASCAR @JRMotorsports and if you win, I’ll guarantee you 4 more. pic.twitter.com/AhSrmiY9Wj

The offer for Talladega includes a bonus incentive: if Berry wins — a feat which would include winning at NASCAR’s shortest track and its longest in consecutive races — Lemonis will add an additional four races of backing behind the JR Motorsports No. 8 team.

As of midnight ET late Sunday, JRM had yet to confirm whether the deal was accepted.

Berry’s triumph at Martinsville marked his first win in just his 13th start. The 30-year-old racer is best known for his success in late models driving for JR Motorsports’ No. 88 car, in which he won the 2020 NASCAR Advanced Auto Parts Weekly Series Division I national championship.

Good for Berry but not necessarily for the sport. When the influx of sponsors dollars is from the series sponsor not new sponsors what does that say?