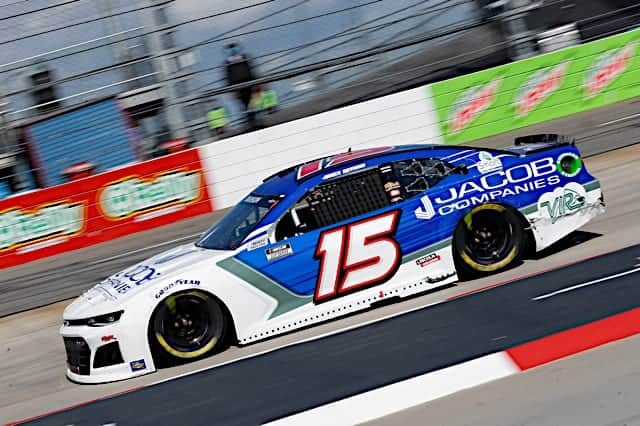 Entering Sunday’s postponed race at Martinsville Speedway on April 11, one of the last images fans saw was that of a spinning No. 15 Chevrolet driven by James Davison. Davison was on the receiving end of a peculiar tap from Rick Ware Racing teammate Cody Ware on Lap 37. The spin sent Davison up the track and slightly into the outside wall.

Not even Davison could have presumed what would unfold on Sunday. Fellow underdogs such as Erik Jones and Daniel Suarez made appearances inside the top 10 and top 15 at times during the race. But both drivers fell victim to crashes that plagued multiple teams at the paperclip. Other drivers like Anthony Alfredo, Michael McDowell, and Corey LaJoie also suffered misfortunes during the race. Davison finished six laps down in 22nd but that marker outlasted his other dark horse competitors.

Rick Ware Racing equipment is undeniably among the most underfunded in the garage, but in a race of attrition that proved to not be a factor, Davison recorded stage finishes of 36th and 32nd, respectively. As each domino known as a race car fell due to crashes or mechanical failures, Davison ascended up the leaderboard to earn his career-high result. His previous career high was a 23rd at the Daytona International Speedway road course in February.

It was a very optimal finish for the team, especially after what Davison had to overcome to get there. The Melbourne, Australia native endured a spin, involvement in a pileup, and a few bizarre run-ins initiated by teammate Cody Ware. Davison had recently made news this past week after announcing he would forgo competing in the Indianapolis 500 to focus on his Cup tenure with RWR. The immediate result was certainly rather favorable.

While his result was not the most ideal scenario, Suarez had a character building week at the Virginia short track. It immediately commenced just a few hours before the scheduled green flag on Saturday, April 10 when NASCAR ejected crew chief Travis Mack for an improperly placed ballast. Jose Blasco-Figueroa filled in for the second time in 2021.

Suarez faced another challenge in the opening stage of the race when he reported a loose wheel to the team. The Monterrey, Mexico native brought his No. 99 Camping World Chevrolet to pit road and fell two laps down. Suarez seized the advantage with his fresh tires and with some help from a caution, returned to running on the lead lap. The No. 99 Chevrolet flashed across the line in 20th at the end of stage two.

Suarez fell a lap down in the final stage but was able to get his lap back by taking the wave around under a caution. The fifth-year driver was able to pace inside of the top 20. A choice to stay out with a little over 200 laps to go put Suarez inside the top five. Despite the older tires, Suarez was able to hold serve inside of the top 15. That’s when chaos struck.

William Byron moved Suarez out of the way for position with nearly 115 laps to go, costing Suarez multiple positions. Kyle Busch and Chris Buescher made contact a little while later, igniting a massive pileup on the backstretch. Suarez was involved in the crash, resulting in his car bursting into flames and bringing his day to a screeching halt. The No. 99 was credited with a 32nd-place finish.

“First of all, luckily no one got hurt” Suarez told FOX Sports 1 after being released from the infield care center. “I was a bit surprised that the safety people took a long time to get to my car. I tried to make sure everything was good to stop the fire, but for some reason it just wasn’t stopping the fire. In that wreck there was nowhere really that I could go. I was trying to slam on the brakes but it was a parking lot in there.”

“The 24 car put us in that position. This weekend overall wasn’t great. We came from the back several times and had a fast car but we made bad adjustments, bad call from the spotter a few times; it just wasn’t a clean weekend.”

Many Cup Series underdogs had their days go from the dog yard to the junkyard following multiple incidents. Both Josh Bilicki and Quin Houff had their best results of the season with finishes of 23rd and 24th, respectively.

The NASCAR Xfinity Series also suffered the disappointment of a postponed race for Friday, April 9. The race resumed at noon on April 11 after 91 of 250 laps. Several underdogs were plagued by issues throughout the day. Brett Moffitt and Jeremy Clements led the way in 12th and 14th. Clements earned his fifth top 15 in seven races. George Gorham Jr. also deserves a shout out after making his Xfinity debut. Gorham earned two stage points in stage two and came home in 18th position.

The NASCAR Cup Series remains in the Old Dominion state for another short track event at the 0.75-mile Richmond Raceway. The NASCAR Camping World Truck Series returns to action in Richmond as well after a two-week layoff. The NASCAR Xfinity Series gets the weekend off before heading to Alabama for a date at Talladega Superspeedway.

In the Cup Series, Ryan Preece was the most notable underdog to lead the pack in the fall race at Richmond in 2020 after finishing 20th.

For the Truck Series, expect plenty of underdogs to break into the top 15 after a similar result in 2020.

Tough days are inevitable but we are ready to bounce back at @RichmondRaceway next week! pic.twitter.com/vCChZppfOz

And that’s a wrap for @XfinityRacing at @MartinsvilleSwy. Finished P. 18 and was able to bring home some stage points for @dgm_racing_ ! Can’t wait to do it again. #FranciscosCollisionCenter #BlackburnsBBQ pic.twitter.com/GMOzp4M6FL