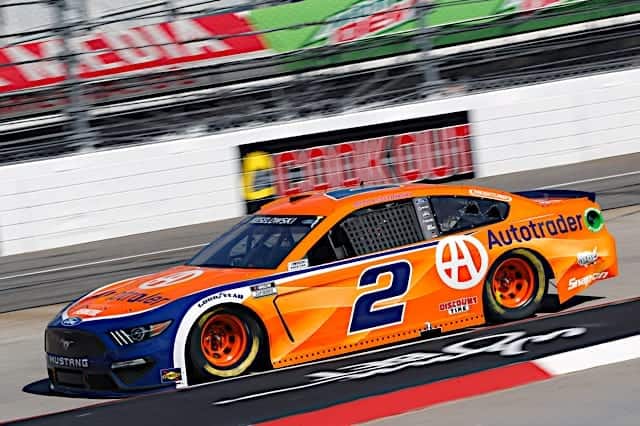 As usual, Martinsville Speedway dished out a healthy dose of chaos for the NASCAR Cup Series.  A wet Saturday night delayed all but the opening laps of the race until Sunday afternoon.  But while the skies had cleared by Sunday, a storm brewed on the track. Fifteen cautions took their toll on the field, including a yellow flag for a lap 386 pileup on the backstretch that collected 12 cars.

Among the unfortunate victims of that incident was Brad Keselowski.  Finding the track ahead of him blocked, Keselowski nearly got his No. 2 Ford stopped in time to avoid taking serious damage.  However, Justin Haley was right behind Keselowski, and he wasn’t so quick to hit the brakes.  Just as Keselowski seemed to be safe, he got hit from behind by Haley and pushed right into Kyle Busch, whose synchronized spin with Chris Buescher triggered the fracas.  Keselowski’s car looked like it took a punch to the nose.  It was too much damage to continue.

The crash left Keselowski with a 33rd place finish.  But perhaps the premature end to his race was merciful.  Keselowski spent most of the afternoon fighting a power steering issue.  He also had a solo spin of his own on lap 340, which put him deep in the field prior to the big crash.  It all added up to a rough day for Keselowski at the Paperclip.

“It looked like some guys (got together) in front of me and the track was blocked,” Keselowski said.  “I think I was just barely going to get stopped in time, and somebody clobbered me from behind and tore us up.

“(The power steering issue) kind of got me in the back,” Keselowski added, “and I got dumped, recovered from that, and then we got caught up in a wreck that we just didn’t look like I could miss.  Just one of those compounding, frustrating short track days, (we) just gotta figure out why we lost the power steering.”

It was surprising to see Keselowski, of all people, struggle so much at Martinsville.  The Team Penske driver may not have been the first person to come to mind when predicting winners at the Virginia short track.  But if Keselowski is not winning at Martinsville, he is usually earning a great finish.  Prior to Sunday’s race, the Michigan native had scored two wins, 11 top fives, and 16 top 10s in 22 starts.  In fact, the poor finish in start number 23 breaks a streak of 10 straight top 10s at Martinsville by Keselowski.  Impressively, nine of those 10 races are also top fives and include two wins.  Keselowski may not have the lofty Martinsville statistics of someone like Jeff Gordon or Jimmie Johnson, but his record there is superb.

On the handful of occasions when Keselowski has finished badly at Martinsville, it was always the result of some unforeseeable short track mayhem, just like Sunday’s race.  In the 2014 spring Martinsville race, contact on pit road with other cars took the No. 2 out of contention early.  The incident left Keselowski steamed at Kurt Busch, who went on to win the race.

When NASCAR returned to Martinsville in the fall, Keselowski suffered a rear axle problem seemingly out of nowhere, slowing on the frontstretch and triggering a multi-car accident behind him.  He was able to finish the race, but the resulting 31st place finish buried him in points.  Unable to score another win that year, that bad day at Martinsville was the primary factor that knocked Keselowski out of title contention.

One year later, Keselowski appeared poised for another good run at Martinsville.  But after a restart with less than 100 laps to go, Keselowski tangled with several other cars at the exit of turn two, setting off another big crash.  Facing a serious points deficit again, Keselowski dominated the race at Texas Motor Speedway the next week but lost the win to Johnson in the closing laps.  For the second time in as many years, a bad day at a track that is normally good to him cost Keselowski a shot at the championship.

The good news for the No. 2 team is that this race will not have a big impact on their championship hopes.  Even after Sunday’s crash, Keselowski is ninth in overall points, a healthy 85 points above the cut line.  Both of his Penske teammates have visited victory lane this year, and considering the speed that Keselowski has shown in most races in 2021, it is only a matter of time before he earns a trip to victory lane as well.

If anything, Keselowski’s rare bad day at Martinsville is a reminder that nothing can be taken for granted at NASCAR’s shortest track.  Even someone like Keselowski, an accomplished racer with a proven record of success at the Paperclip, is not immune to misfortune.  Plagued by spins, power steering issues, and multi-car crash that blocked the track, Sunday’s race was anything but business as usual at Martinsville for Keselowski.  But if Martinsville offered up business as usual to drivers and fans, it would not be such a special venue in the first place.  As the No. 2 team was reminded this weekend, success at Martinsville is never automatic.