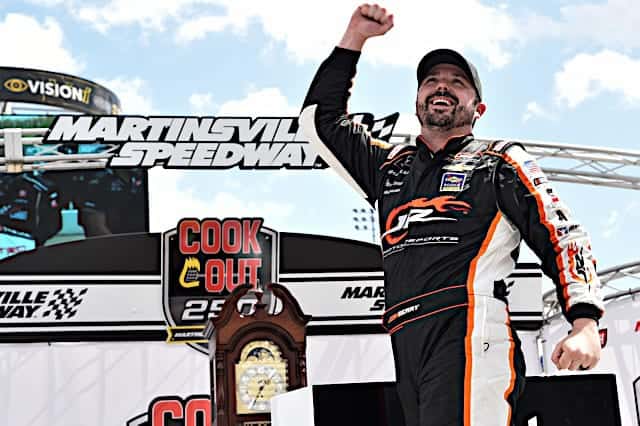 The Cook Out 250 from Martinsville Speedway is in the books and Josh Berry is officially a NASCAR Xfinity Series winner in only his 13th series start. Berry came home to the checkered flag in front of Noah Gragson, Daniel Hemric, Ty Gibbs and Brandon Jones – as well as an adoring Martinsville crowd. JR Motorsports and Joe Gibbs Racing both secured a solid points day, locking out all top-five positions.

Gibbs continued an impressive start to his NASCAR national series career, earning his third top-five finish in as many starts, while teams like Kaulig Racing and Stewart-Haas Racing endured an underwhelming and forgettable day.

Finishing first, second, third and fifth, Berry, Gragson, Hemric and Jones qualified for the next round of the Dash 4 Cash at Talladega. Being the highest-finishing series regular on Sunday, Gragson took home the check for $100,000.

Josh. Berry! One month after a heartbreaking crash from the top five at Phoenix, the short-track specialist brought his No. 8 JRM Camaro to victory lane after holding off a late surge from teammate Gragson. In his 12 prior Xfinity starts, Berry posted a range of performances with a previous best finish of seventh (twice) and a worst finish of 38th at Atlanta this year. At 30 years old, Berry previously earned top-five finishes in both the ARCA Menards Series as well as the K&N Pro Series East, not to mention his history of success in late models.

Martinsville is a racetrack with rich history and high expectations. As a short track, it is one of the few venues where the racing hasn’t come under heavy fire from the fanbase for one reason or another, and Martinsville delivered more of the short-track norm for the Cook Out 250. Short tracks mean short patience, and there was ample aggression on display throughout the field for the duration of the race.

Teams were only given four tires for the Cook Out 250, and this proved conducive to mixed strategies, particularly towards the stage ends. A timely caution near the conclusion of stage two saw the likes of Bayley Currey, Jade Buford and Stefan Parsons elect not to pit, leaving Currey’s No. 74 to lead the restart, though Berry would need only three laps to lay claim to the lead.

Following their post-race scrap at Atlanta, Gragson made a phone call to Hemric on Thursday to discuss their Atlanta incident, though maybe as more of a formality than anything else. Speaking to FS1 afterwards, Hemric said that Gragson had indeed apologized, but that the two decided to agree to disagree regardless. By the 20 to go mark, Hemric was third, right behind Gragson as the No. 9 worked its way through lapped traffic. Hemric made contact with Gragson’s left-rear quarterpanel exiting turn 4 on the final lap, but overall Gragson and Hemric put on what some may call an underwhelming battle for second given the context.

On both Friday and Sunday the race was littered with cautions, almost all of which were brought out by single-car spins. This abundance of cautions meant that the race’s final run to the finish was its longest green flag stretch, totalling 71 laps. By comparison, the race’s next longest green flag run totaled only 29 laps. While this was good for those who like to see restarts, cautions do seem to breed cautions, and those who were looking for long runs of honest short-track racing may walk away from today’s race less than satisfied.

The 2021 season has made the number 98 look as lucky as the number 13, as Riley Herbst crossed the line to finish 29th after a blown tire forced the Las Vegas native down pit road under green, leaving Herbst to finish two laps down. In seven races in Stewart-Haas equipment, Herbst has only managed three finishes of 11th or better, and has wound up finishing 26th or worse on the other four occasions; though often through no fault of his own.

Kaulig Racing has been one of the strongest overall teams in the Xfinity Series over the past few seasons. However, Martinsville seems to have played out as a painfully just below average weekend for the team. While AJ Allmendinger lead early on Friday night, he would ultimately be set back by mechanical woes and only manage a 13th-place finish. Justin Haley and Jeb Burton wound up eighth and 11th, but were not serious contenders for a win at any point throughout the day. Jeffrey Earnhardt fared worst of all, ending the day in 36th, some 37 laps down. While the race-winning potential of Kaulig Racing won’t be discredited by one bad day in Virginia, the team probably won’t be bringing this race up in conversation at any parties in the near future.

The largest incident of the race was triggered when Joe Graf Jr. was sent spinning off the nose of Gray Gaulding into turn 3. Gaulding continued on, but Graf Jr. was sent spinning, collecting Blaine Perkins and leaving both cars with notable damage. After the race, their paths crossed in the garage, with punches being thrown and the two being separated by officials and one lone crew member. Afterwards, Graf Jr. said that Gaulding’s attitude and remarks escalated their post-race discussion, leading to punches and a short bout of ground fighting.

Speaking on SiriusXM NASCAR Radio, Gualding said “Oh yeah, I 100% wrecked him. And I’d do it again all over again. I might have to do it again when we get back to Talladega. He’s just a moving chicane every week. Just like today, I’m not trying to throw any shots because talking about him is pointless because the poor kid can’t get out of his way.

“I think for me, it’s just like early in the race, we get the green. He starts behind me. We’re just trying to settle in and on a restart he absolutely bulldozes through me, puts me up three lanes and I lost like 15 spots. It’s funny how he forgets that. His memory ain’t all there, I guess.”

Graf Jr. likewise told SiriusXM NASCAR Radio “There with about 75 laps to go, Gray just wrecked us and [Perkins], drove us off into the corner and flat out-wrecked us, ending our day.” “I went to have words with him afterward and then he mouthed off to me and there were some punches thrown. I landed a couple.

“The garage is just loaded with drivers who pretend they’re tough, but they’re going to find out how tough they are if they race me like that and then run their mouth at me. Just ask Gray how he’s doing now. I’m sure he needs some ice packs.”

In similar fashion, Colby Howard was turned by Kyle Weatherman on lap 140. On the surface the contact looked like a case of Weatherman being too enthusiastic on corner entry, Howard took to Twitter after the race to state that Weatherman intentionally dumped him following multiple laps of contact laced racing.

He doored me every lap we were side by side, he cleared me, and we both ended up back on the outside, I gave him a pop. Got around him and he drove me to the wall in 3-4. I popped him harder in 1-2 and he dumps us in 3. I thought he woulda learned don’t give what you can’t take?? https://t.co/CfYAz525RY

It feels unnatural to refer to Gibbs as an underdog given that he’s in race-winning equipment, but wow! To win in his debut at the Daytona International Speedway road course in the fashion he did was impressive enough from the 18-year-old, but to follow that with a second place at Phoenix Raceway and a fourth at Martinsville has Gibbs well beyond any speculation that his Daytona road course win was a mere fluke. Outside of this, the rest of the field looked relatively normal in terms of results, though Allmendinger deserves a round of applause for salvaging a 13th-place finish after initially finding himself off the lead lap during Friday’s opening phase of the race.

No Cup Series regulars took part in Sunday’s Cook Out 250, though JJ Yeley hopped back in his Rick Ware Racing Chevrolet Camaro for the Cup Series’ Blue-Emu Maximum Pain Relief 500 later in the evening.

“Oh my gosh. I have so many people I could thank, I could be here ‘til tomorrow morning!” – Josh Berry

Martinsville provided more of a reliable product with the Cook Out 250. Passing and battling for position was plentiful, and the tempers and tension we expect from short-track racing made their mandatory appearance between Graf Jr. and Gaulding post-race. That said, the high number of cautions threw a wrench in some very decent racing, resetting situations that were developing into exciting battles for position.

Personally, I’d like to see officials leave fighting drivers to their own devices for longer than we normally see in NASCAR. Think back to the 2016 Truck Series event at Gateway where Spencer Gallagher and John Wes Townley were given a good 37 seconds between the first punch and the intervention of a NASCAR official. If two drivers see an on-track issue worthy of a brief fisticuff, I can’t imagine the fanbase would lament seeing said sparring match go its natural course.