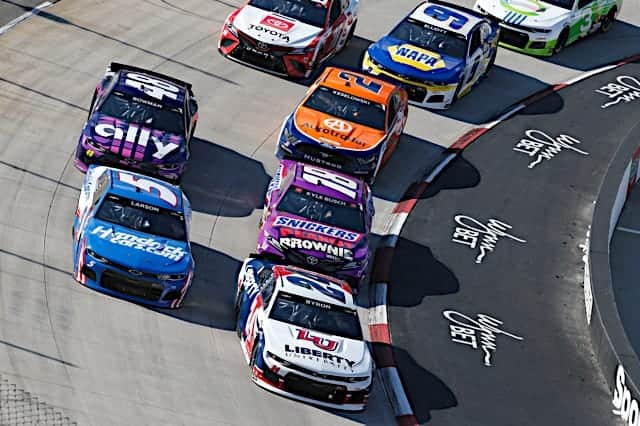 All three Cup teams involved were caught for lug-nut violations, with each team having a single unsecured lug nut on their car at the conclusion of Sunday’s Blue-Emu Maximum Pain 500. FOX commentators Mike Joy, Jeff Gordon and Clint Bowyer noted late in the race that due to the pressure to make good time on pit road at the half-mile track, lug nut violations were likely.

Each team incurred a $10,000 penalty for their respective crew chiefs. The crew chiefs that were fined are as follows:

Prior to Sunday’s race, Trackhouse Racing’s No. 99 Camaro, driven by Daniel Suárez, was penalized 10 driver and owner points for an illegally placed ballast, which violates section 20.17.2.1.b of the NASCAR rule book. Crew Chief Travis Mack was left to sit out the Martinsville Speedway race, while Jose Blasco-Figueroa, who had previously served as crew chief for the No. 99 team at Atlanta Motor Speedway, filled in. Suárez was forced to start at the rear at Martinsville.

On the Xfinity side, Brandon Jones’ No. 19 team (Crew Chief Jeff Meendering) acquired a $5,000 fine for one unsecured lug nut discovered post-race.

Also, Blaine Perkins’ No. 23 Our Motorsports team saw Tire Technician Brian Graham suspended from Martinsville due to the loss of an improperly installed axle, an instance of safety-related negligence.

Finally, hauler driver of Sam Hunt Racing’s No. 26 Xfinity team, Kurt Butcher, has been indefinitely suspended by NASCAR for violation of the governing body’s substance abuse policy. No further details are available on the nature of Butcher’s suspension.