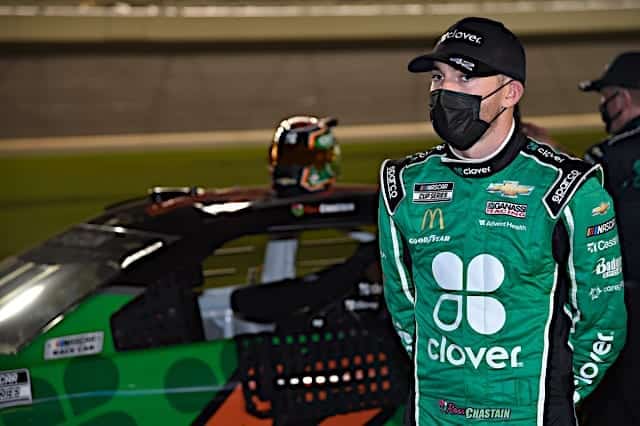 What’s up with Ross Chastain? He spun out Brad Keselowski and Erik Jones this past week and doesn’t seem to be living up to expectations this year. — Rick G., Davie, Florida

It’s a real shame Chastain hasn’t run better this year. An all-around nice guy who people seem to root for easily, he’s paid his dues and seems to have the raw talent to succeed at the NASCAR Cup Series level. But let’s face it: he’s massively underperformed eight races into the season.

He started off 2021 with a solid top-10 finish in the Daytona 500 (seventh), but has failed to crack the top 10 since and has only finished in the top 15 once (14th at Atlanta Motor Speedway). So far, Chastain’s performance this year has proven one thing for sure: Kyle Larson was keeping Chip Ganassi Racing ahead of multiple teams that they theoretically shouldn’t have been in front of.

Kurt Busch currently sits 15th in the points standings while Chastain is 10 positions behind in 25th. Busch has two top-10 finishes to Chastain’s one. And while Busch’s performance isn’t that much better than his teammate in the No. 42, it still is a considerable improvement.

Chastain was likely to be judged off how he performed parallel against his CGR teammate this season. Busch’s average finish is 3.4 spots better, and he’s finished better than Chastain five times this season. Small sample size still only eight races into the season, but the point stands.

As is done often with the College Football Playoff committee, the “eye test” also leans Busch’s way. The 2004 champion has one DNF (Atlanta), and that came off of Denny Hamlin‘s front bumper when Busch was firmly inside the top 10. At the Daytona International Speedway road course, he rebounded from a spin through the grass to finish fourth. This past weekend at Martinsville, he was spun out (not of his own doing) and finished only four spots behind Chastain.

The Melon Man hasn’t made many friends so far this year, wrecking Keselowski and Jones at Martinsville (while also possibly flicking off Chase Briscoe), wrecking Kyle Busch at Phoenix Raceway, blocking Matt DiBenedetto all the way down the track at Homestead-Miami Speedway and crashing at the Daytona road course and on the Bristol Motor Speedway dirt to boot.

Chase Briscoe tweeted that a competitor at Martinsville flipped him off for a lap. Who was it? Briscoe wouldn’t say but he said there was more than one. He still doesn’t know why. pic.twitter.com/sWlQZPeenu

Anybody in their right mind would be happy to see Chastain succeed. But to say he’s going through some growing pains behind the wheel of the No. 42 car so far would be an understatement.

Is there any chance Josh Berry will run the full season for JR Motorsports after his win at Martinsville? I never jumped off my couch and cheered so hard! – Marie V., New York, New York

You’re not alone, Marie. I’m sure hundreds of thousands of other short track racers across the country saw themselves in Berry’s victory (for good reason), and their dreams of making it to the big time aren’t dead yet.

But I think the dream of Berry running a full season for JRM is dead. Not going to happen, unfortunately. Two-time and defending ARCA Menards Series East champion Sam Mayer is signed on for the second half of the NASCAR Xfinity Series season in the No. 8 Chevrolet (once he turns 18 year old), and it’d be hard to imagine seeing Mayer be kicked out of that ride, considering the talent (and funding) he brings.

However, there’s still hope! It’s always possible that another team could scoop up Berry, secure the necessary sponsorship to run a full second half of the season and voila: Berry is full-time. But that’s way easier said than done, as we know.

Marcus Lemonis, everybody’s favorite money hander-outer (yes I just made that up) even got in on the action. Maybe this could lead to something more down the road? We may find out at Talladega Superspeedway.

But more than anything, Berry’s win should be looked at with validation. Validation for Dale Earnhardt Jr. for believing in him and the short tracks for a decade-plus. Validation for Berry himself, working day and night to get an opportunity like this one and capitalizing. Validation for every short track racer who thought they could, but never believed they would.

Dale Jr. never gave up in his conviction that Josh Berry deserved opportunities at the highest levels of NASCAR.

Berry did everything he was supposed to on the track and behind the scenes at JR Motorsports leading to a signature moment at Martinsville.https://t.co/EMAfhtGbre

In the Dale Jr download with Berry yesterday, Jr said they were “right on the cusp” of having a full-time ride set up for Berry. Here’s hoping it’s so. Great article.

new drivers into cup series aren’t allowed to learn. it’s a different animal. owners should know that there is only a rare diamond in the rough that will exceed expectations in rookie year.

Dale junior I am so excited for you though