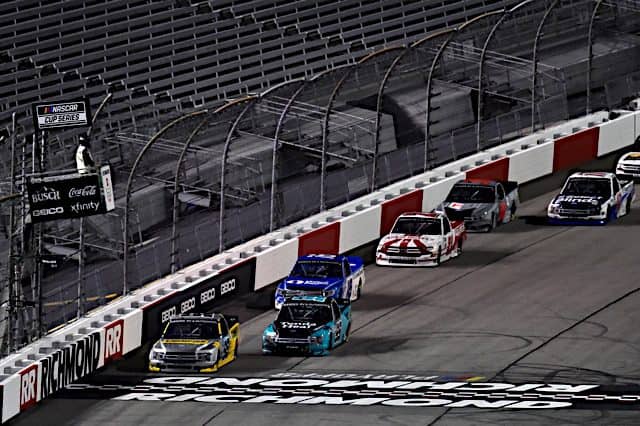 The NASCAR Camping World Truck Series is headed back to my home track of Richmond Raceway for just the second time in the past 15 years, and it just so happens to be the track’s 75th anniversary.

Trucks made appearances at the .75-mile D-oval from the series’ inception in 1995 through 2005, but Richmond fell off the schedule for 2006 and beyond. The series only visited the Commonwealth for events at Martinsville Speedway, which sits about three-and-a-half hours and 180-ish miles southwest of the capital city.

Last year changed all of that, when Richmond was dropped back onto the truck slate for a spring race. Thanks to COVID, that race didn’t happen until the fall, but it kicked off a four-race set from Thursday to Saturday, in which the trucks raced Thursday night and Xfinity raced twice in less than 24 hours on Friday night and Saturday afternoon. The 400-mile Cup race capped it off on Saturday night.

Tonight, we set the #NASCARPlayoffs field for the Gander Trucks.

The green is out in the #ToyotaCare250 at @RichmondRaceway! pic.twitter.com/xJS5t6iExq

Personally, it was nice to see the trucks return to a track I can drive to in 30 minutes or less. It was also nice because although IndyCar intended to return to RR in 2020 after a decade away, COVID caused the cancellation of that race – and then Richmond was completely left off the open-wheel schedule for 2021.

Meanwhile, despite Saturday (April 17) marking their second race there in less than a year, Richmond is still an enigma for the Truck Series: there’s been just the one race there in the last 15 years; few drivers have experience there at all, let alone in the series itself; and that one race was a rescheduled event amid possibly the most chaotic and bizarre year NASCAR has ever had.

Richmond is also the only .75-mile track on the NASCAR circuit. The closest tracks comparable are neighboring venues Martinsville Speedway and Bristol Motor Speedway, but both are half-mile ovals and vastly different from each other.

So, who has the best shot at the ToyotaCare 250 this time around?

Here’s a rundown of potential players.

Conventional wisdom would single out Grant Enfinger. Despite leading only 18 laps on a 70-plus-degree September night (typical for Richmond’s ungodly, never-ending summers), the No. 98 ThorSport Racing truck chased down teammate Matt Crafton and went to victory lane for the third time that season. Enfinger also swept the Virginia races in 2020, pulling off a clutch win at Martinsville nearly two months later to lock himself into the championship round, so maybe Richmond will grant (ha, see what I did there?) Enfinger some more good luck this time around.

“I definitely feel great about it,” Enfinger said Wednesday. “I feel like this is a great opportunity for us on this No. 98 Tundra team. We are taking the same truck that we ran there last year – same basic setup, same tires, so hopefully, we can duplicate the result. Obviously, things are going to be different with it being a daytime race. I feel like it’s going to be a little bit slicker out there with hopefully a little bit of sunshine on Saturday.”

The runner-up on that fall evening, though, was Enfinger’s stablemate Crafton. The 44-year-old has more starts than anyone at Richmond in a truck, with six spread out through his 22-year career in the series, and he raced there five times before the division left the Commonwealth. His appearances in 2001 and 2002 both resulted in 32nd-place finishes, followed by a 14th in 2003 and a 21st in 2004. Crafton then finished seventh in 2005, and in 2020 seemed to keep improving, picking up right where he left off. He led 25 circuits, but lapped traffic proved to be his kryptonite and the No. 88 was passed by Enfinger with seven laps to go.

Finishing right behind them was another ThorSport Racing driver in Ben Rhodes, who led 66 laps — the most of any driver — and won the second stage. Enfinger finished second in both segments, and the two trucks swapped the lead several times but kept a ThorSport truck out front – between laps 110 and 186. Essentially, ThorSport dominated the night, leading 109 of the 250 laps.

Don’t count out GMS Racing or Hattori Racing, though. A year ago, the former’s Brett Moffitt and Zane Smith led for a combined 76 circuits and Hattori’s Austin Hill was out front for 65. Moffitt made the move to Niece Motorsports in the offseason, but he finished fourth in the truck race and sixth in the first Xfinity event at Richmond … so even with different equipment, it’s hard to count him out. It’s also worth nothing that both Moffitt and Hill have K&N Pro Series East victories at the short track in 2012 and 2015, respectively.

GMS, meanwhile, has Smith and defending champion Sheldon Creed on its roster. Add to that pair Tyler Ankrum, who ended up sixth in 2020’s return to Richmond.

The biggest threat looming on the horizon for regulars is Kyle Busch, who makes his third Truck Series start of the season this weekend. Busch has 12 wins at Richmond (six each in Cup and Xfinity competition) and has two starts in a truck at Richmond, albeit way back in 2001 and 2005. Busch excels at Richmond and in trucks (although separately), so the cumulative experience means he would be my pick to go to victory lane Saturday night.

Johnny Sauter is the other driver with loads of experience at Richmond: he has 20 starts between Cup and Xfinity at the track, but made three Truck appearances there from 2003-2005. His Truck effort last year was the complete antithesis of his teammates, though: Sauter finished eight laps down in 27th, forced to pit road less than 10 laps into the race with issues.

The most interesting part of Saturday’s race will be seeing if ThorSport puts on the same show they did last year. The team switched from Ford back to Toyota at the beginning of 2021, but it doesn’t seem to have affected them: in the five 2021 races thus far, Rhodes has two wins (on Daytona’s oval and road course) and the four-truck stable has nine top-10 finishes. Enfinger, for his part, has two top-10s in his four starts this year, despite being part-time; one of them came in Codie Rohrbaugh’s No. 9 truck, while his other two races both resulted in 11th-place efforts.

I won’t fully know what to expect from the Truck Series at Richmond until 2022, probably. Regardless, I’m personally happy to have the series back in the area and can’t wait to hear the engines again as they flash by the red-and-white walls of the raceway.