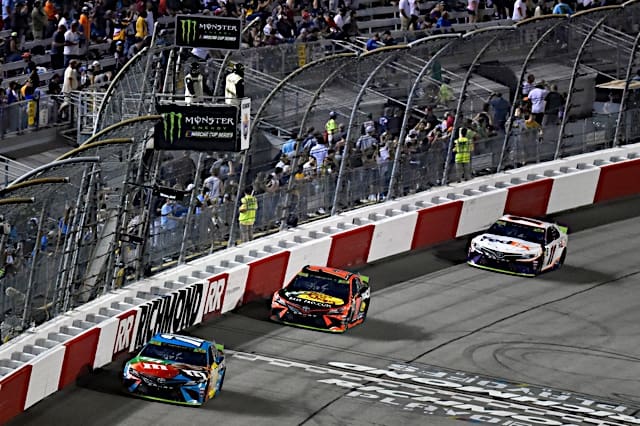 Things are starting to get better!

I got my first dose of Pfizer’s COVID-19 vaccine (thanks, Mark Martin!) almost two weeks ago. Fortunately, I only had minimal soreness in a couple of pangs that lasted a few seconds apiece and then felt a little more tired than usual that night, so I’m looking forward to side effects that are just as in the background as those were (hey, I can hope, right?) from the second dose.

Who else got vaccinated recently? NASCAR’s own Bubba Wallace, who told CNN on Tuesday that he hopes to encourage others to do the same.

“I am trying to be a leader and get others vaccinated,” @BubbaWallace told CNN today at the 23XI Racing shop, where the NASCAR driver and his team members got their vaccines– while trying to address vaccine hesitancy.

That said, none of us are out of the woods yet in terms of COVID, what with the variants and the occasional disregard for others’ well-being. So, while I’m looking forward to getting to movie theaters again and hanging out with friends, I’ve got masks handy for all of that.

As a sort of parallel to the vaccination rates rising, we’re seeing shadows of normalcy beginning to creep onto the NASCAR circuit again.

Limited capacities of fans returned to races starting last year and that has continued into 2021, baby steps towards sellout crowds packing venues once again.

Even NASCAR itself, while never exactly changing amidst the pandemic, felt a bit surreal last year. Race dates were constantly moved around; a bunch of races ended up being impacted by inclement weather; and midweek races threw the biggest wrench of all into the sport’s effort to hit the 36-race mark and get to Phoenix Raceway’s championship round on time.

Maybe it’s just me, but while I love NASCAR and having races every week, last year’s frequent two- or three-races-a-week schedule was one of the most chaotic things I’ve ever covered. I didn’t even go to a race last year, but there was a sort of sense of exhaustion when the season finally concluded. It was an incredibly fun season that ended up being a veritable rollercoaster, but I was grateful for the relatively slow offseason and was all recharged when Daytona International Speedway rolled around in February of this year.

This year started out surreally, too, seemingly as a hangover from 2020: Michael McDowell and Christopher Bell each scored their first career wins in the first two races of the year at Daytona and its road course, when back-to-back first-time winners are such a rarity. The Daytona 500 lasted nearly 12 hours from start to finish because of rain. William Byron‘s victory at Homestead-Miami Speedway felt more or less like a first-time winner, since his first career victory came amidst a Daytona wreckfest last year.

Outside of that, though, it’s been nice to have one race scheduled per week instead of as many as three. Tracks sit on the schedule largely where they normally do. Sure, there’s a few dates moved around and some new tracks on the docket, but that’s more or less normal. Watkins Glen International and Sonoma Raceway are back on the summer slate in 2021, both of which lost races in 2020 due to restrictions in New York and California, respectively.

Even this upcoming weekend’s duo of events at Richmond Raceway has a sense of normalcy to them. The spring weekend in 2020 was half put on hold, half cancelled, with Cup losing one of its two races there and the Camping World Truck Series’ return to the track postponed until the fall. That race weekend featured four races in three days, with Xfinity cars on track twice in less than 24 hours.

It was also revealed Tuesday night (April 13) that NASCAR will allow up to nine team-related individuals into the garages and on pit road, so long as they’re vaccinated.

.@NASCAR will soon start letting a single-digit number of vaccinated sponsors/guests per team to get back into garage/pit road (but no hauler tours).

➖ Vaccinated team owners will also start being able to go back/forth from the infield to suites again. https://t.co/lFuF2UJu3F

This is a great first step. While I don’t see things being completely back to normal until late, late summer or early fall (and that would be in a perfect world), allowing that mobility between the infield and suites – and simply the presence of other people besides the crews in the infield – is inching in the right direction.

I’m not surprised, and frankly glad, that it’s taken a year to get to this point. I still think some of the numbers allowed in the stands last year, when cases were still on the rise and no vaccine in sight for another few months, was a bit excessive and potentially dangerous, but we’re getting there. We’re getting there!

Since I’m not fully vaccinated and still taking precautions, I won’t be at my home track of Richmond this week. However, I’m looking forward to getting back there in the fall, as well as to some other tracks in the interim and/or afterwards.

Let’s keep doing what we’ve been doing. I can’t wait to be back at the track this fall … or maybe even this summer!

Don’t know your age Adam or your comorbidities but you sound way too fearful of Covid and clearly very judgmental of anyone who has tried to just live normally this whole past year. I’m going to the Richmond truck race with my son. Have no fear at all. Already went to a movie last year. I’m more likely to die in an accident driving down I-95 than I am of Covid.
But keep listening to Fauci and do everything he says even when he changes his mind every time he appears on CNN.

Science changes as new facts emerge. This virus is new, so we had no baseline a year ago and it’s natural that we are learning as we go. It is actually REASSURING when science responds to new data with new recommendations. The ones who stuck their heads in the sand a year ago and continue to live there are largely responsible for the spread of this disease. This isn’t just about you and your son – it is about those you may unknowingly infect.

NASCAR. Help us take Liberty back! Ditch those masks!

Please explain how wearing a mask has taken away anyone’s liberty?
Asking for a friend.

Nest time you should be sure of the definition of a word before you comment. (just for the record I am fine with wearing a mask -until I get my second vaccine at the end of the month).

liberty definition:
1 : the quality or state of being free:
a : the power to do as one pleases.
b : freedom from physical restraint.
c : freedom from arbitrary or despotic (see despot sense 1) control.
d : the positive enjoyment of various social, political, or economic rights and privileges.

By definition I have lost “a: the power to do as one pleases”.

Those were the days.