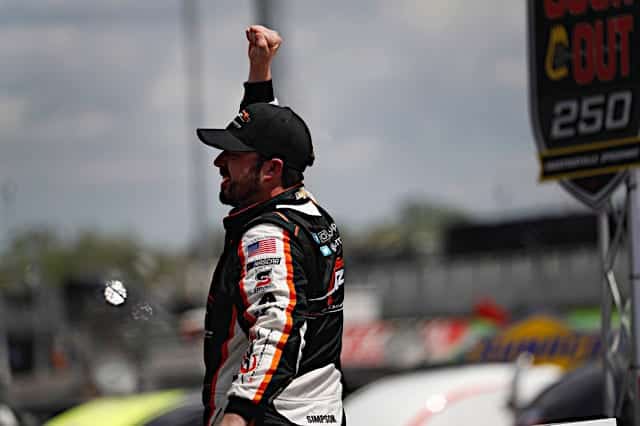 Considering the sudden success of drivers like Ross Chastain and Josh Berry, is it important for the sport to have teams look at veteran short track racers? What other largely unknown driver could excel given the right opportunity?

Luken Glover: It definitely is worth a look into. Both Ross Chastain and Josh Berry excelled greatly when given the right opportunity. Chastain was in a mid-pack Xfinity Series ride while Berry was mainly running on the country’s biggest short tracks. It teaches aggression and discipline at times, and we saw that with Berry at Martinsville Speedway.

Josh Roller: If I’m a team owner or a manufacturer, I’m always looking around for potential talent. Berry’s victory proved that short track racers can get the job done with the proper equipment. Therefore, I can’t single out one driver. It’s about getting opportunities, and when said opportunity comes with the right team and track, you get a performance like Berry’s this past weekend.

Mark Kristl: Teams should look at veteran short track drivers, but sponsorship drives the sport, so it is a challenge for teams that should bring in a talented driver for one of these short track races. If given the opportunity, Bubba Pollard would wheel a solid race for a team on a short track. He has won at a multitude of different short tracks, he is a popular short track driver and he is old enough where a team wouldn’t need to worry about him overly aggressively driving, thereby possibly tearing up equipment.

Camping World CEO Marcus Lemonis has used the brand to sponsor several teams across the top three divisions this year, including 10 of the 40 trucks in the Las Vegas Speedway Camping World Truck Series race. Is this entirely beneficial, or is there a potential downside?

Kristl: The downside is it is a reflection of the incredible struggle for teams to acquire sponsorship, which is not good for NASCAR. Lemonis stepping up is ultimately beneficial, though; it is bringing brand awareness to his companies while simultaneously increasing the level of competition in races.

Glover: It’s beneficial to a degree, but there is a potential downside. It’s been great to see how Lemonis has stepped up to sponsor teams. But it can also hurt marketing for other sponsors who are interested. If this were to continue, a team would go to Camping World for sponsorship when it has an open race. The problem lies in that it would be temporary, and then it’s right back where it started. Then the problem of finding more long-term sponsors arises.

Roller: It’s an obvious benefit to teams that receive the sponsorship dollars where there previously wasn’t. It’s beneficial to not see handfuls of unsponsored cars or trucks turning laps, whether you are watching on TV or at the track. I’m sure the teams are well aware not to always count on this money being available as a backup. The only downside I could see is if written in the Camping World-NASCAR entitlement sponsor contract for the Truck Series that competitors of Camping World can’t sponsor a truck. Because if Camping World and its fellow brands see a jump in sales and its competitors attribute that to multiple trucks being sponsored, they should have the right to sponsor trucks in turn.

Poor weather has affected dozens of races over the past couple years. Is there anything logical that NASCAR can do, or is it just an understood pitfall of racing?

Roller: TARPS! Three of NASCAR’s most rain-prone locations are the three ideal places to use tarps: Bristol Motor Speedway, Martinsville and Richmond Raceway. Why? Because they are short tracks. Even if you only got the straights covered, that helps with track drying time for television, which is the big point I’m hinting at. The less time to have to spend drying the surface, the quicker TV can get back to covering racing instead of time-filling. Tarps aren’t practical at Michigan International Speedway or Pocono Raceway. The straightaways are too long and wide. If groundskeepers at baseball stadiums can do it, there has to be some way to locate tarps between the outside retaining wall and catchfence for easy access.

Kristl: Other than adjusting the schedule to better suit racetracks, inclement weather is a pitfall of racing. Bristol and Martinsville races both could be moved back a little bit to hopefully gain better weather, but it is no guarantee mother nature would cooperate.

Glover: No one controls the weather. This is something NASCAR has to work with as an outdoor sport. It’s similar in other sports at certain levels like baseball. NASCAR could improve in making calls sooner when the obvious is presented. Start times have been controversial over the past couple of years, and that is something NASCAR may want to explore. But rain can hit at unexpected times, so NASCAR has to be fluid with it.

Speedway Motorsports President Marcus Smith said recently that the organization is looking at all options for the property containing the long-closed North Wilkesboro Speedway. What should be done with it?

Glover: The first thing that likely pops into most fans’ heads is to renovate it. However, the track requires a lot of maintenance just to get back to decent shape. A complete reconfiguration of the track may be required. By that, I mean keeping it a short track, but scraping the pavement and repaving would be essential in the process. A lot would have to be done externally, as well, but it would be great to see North Wilkesboro back in NASCAR.

Roller: I have about a half dozen ideas, but one that should be considered is converting North Wilkesboro back to a dirt track and making it NASCAR’s home for dirt. But I have one catch, especially since Wilkesboro will be a three- to four-year project at the least: in NASCAR’s next broadcasting deal, a 37th race should be added to the Cup schedule. It is my belief that the All-Star Race will go to Atlanta Motor Speedway and that Atlanta’s second date will go to Nashville Fairgrounds Speedway when the time comes to add the Fairgrounds to the schedule. There aren’t a lot of options for Speedway Motorsports to place any form of North Wilkesboro onto the Cup schedule without an additional race. If a race can’t be added, of course I’d love to see the paved track revived to at least host lower divisions of NASCAR, late models and whatever other forms of racing express interest in racing there.

Kristl: Because of the amount of money needed to restore it to proper racing conditions, North Wilkesboro is not worth reopening. It’s a shame, but it’s not financially worthwhile.

Even if the race were only to be “popular” for a few years, the renovations would be paid by the thousands of fans that would attend a revamped Wilkesboro. I know I would go because the travel time isn’t bad and I have a camper to sleep in. Renovating it wouldn’t be that hard–look what they did with Daytona and Phoenix. Rebuild the garage, put pavement down and while still renovating, bring in temporary scaffold seating (up to code, of course). Install SAFER barriers or as suggested, just build on what is already there, no need for reconfiguration. If corporate America would get on the bandwagon, NASCAR would be in a great position. Unfortunately, we’ve had movies like Talledaga Nights that many (and most critics agree) didn’t like so now we have a generation where kids who saw it don’t take racing seriously. Racing IS serious and exciting. I say take a Pocono date and create that “Spring Fling” “Short Track season” as Mr. Waid said. As an avid fan for 33 years and an amateur driver (in the past) it’s time to regain roots. Great piece.

Corporate America was on the bandwagon at one time. You make it sound like they care about the sport. They care about how many fans they can reach via advertising. When both ratings and attendance started tanking they could no longer justify the expense. They aren’t going to step in and rebuild any track, however once the track is built and becomes successful (assuming that success is across the entire sport) they will be quick to come back. This is not a chicken and egg deal. The track and fans have to come first, Corporate America comes after.

The problem is when you are trying to get other people to spend the money while you benefit your options are limited.
Generally it’s either the taxpayers or some sympathetic corporate CEO.
Face it SMI has pockets deep enough to do this at any time. The point is they don’t want to spend their money.

Agree. It’s not the old days anymore. Don’t know about anyone else, but I can’t name the make or model of most cars I see in towns anymore. Forget picking a year.