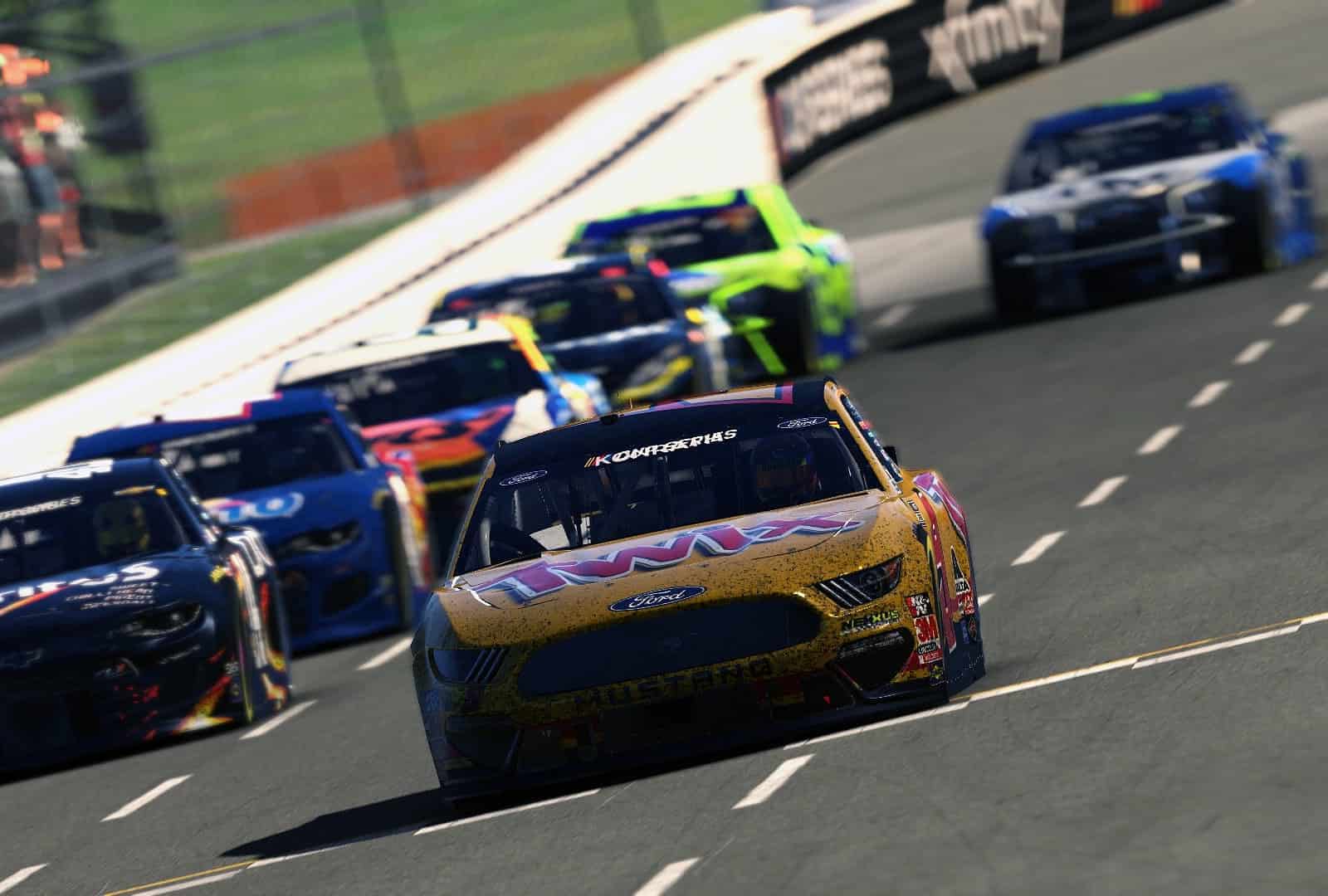 It was a mixed bag of various events this past week among the iRacing leagues covered in The Virtual Frontstretch. For the leagues following the NASCAR Cup Series schedule, Martinsville Speedway proved to be filled with hurt feelings. Other leagues steered clear of the paperclip and had much better times on the service in their respective communities.

The eNASCAR Coca-Cola iRacing Series was also on last week at Richmond Raceway. Brandon Hauff broke down the absolute dominance from the new kid on the block, Spacestation Gaming’s Vicente Salas, who was able to lead every single lap from the pole position on Tuesday night.

A snafu with a recent update for the NASCAR Cup Series vehicle windshield banners was reversed as well earlier last week. Banners were edited to include last names automatically placed by iRacing. Unfortunately, the text covered up where the Coca-Cola logo would go during the eNASCAR Coca-Cola iRacing Series events, and it was changed back to how it was before the patch.

Other than all of that, not much else besides the community last week. Here’s what you missed in the 100% Cup Series, the FTF Cup Series, the Esports Racing League, and in the Mooncar Premier Series last week.

Bryson Hixenbaugh was the big winner on Friday night last week in the 100% Cup Series. The Martinsville 500 took the series participants 500 laps around the .526-mile paperclip one night earlier than usual due to the NASCAR Cup Series being scheduled during their normal time slot.

A full length race at Martinsville is no easy task, but the 100% Cup Series was able to accomplish this in less than four hours. Jon Dulaney started on the pole position and went on to win the first stage at lap 130. After a caution on lap 185, Dulaney pitted and handed the lead to Cameron Stone with Hixenbaugh right behind in second.

At lap 208, Hixenbaugh took control of the event from Stone. A few laps after that, Dulaney found problems when he ran into a stopped Devin Medeiros. With Dulaney in trouble, Hixenbaugh went on to take the second stage at lap 260.

The final stage went off with Hixenbaugh still in control, but a few laps in, Dulaney found trouble again racing Dalton Mobley inside of the Top 10.

As the race went on, a total of 27 caution flags flew for 131 slowed laps, which is way more than this series normally sees on any given race night. Still, a long green flag run allowed for Hixenbaugh to flex his muscle as he lapped the entire field by 24 laps to go. Hixenbaugh led the most laps and picked up his second victory of the 2021 season.

With the virtual grandfather clock in his possession, Hixenbaugh moves into the points lead over Dulaney by 10 as the series heads to Richmond Raceway next. That race will happen by the time this article is published.

In contrast to the 100% Cup Series, FTF’s attempt was half the distance and had seven more caution flags. It was a disaster of a race on Sunday night in the FTF Cup Series. The Kollin Keister Driving School 250 at Martinsville Speedway saw the series’ most cautions in its entire history dating back to the days of NASCAR Racing 2003 Season.

Garrett Konrath was scored as the winner of the pacing extravaganza after 166 of the 259 laps were run under the 34 caution periods. The story of this race was the sheer amount of cautions and the upset drivers in the post-race discussion.

Michael Cosey Jr. took the pole position and went on to win the first stage, leading the most laps on the night at 85 laps. Matt Adams took the second stage and came close to taking the victory, but it was ultimately Konrath who was able to outlast the cautions and restarts in order to take his first career FTF Cup Series victory.

The win places Konrath inside the playoff grid safely should he stay within the top 25 in the standings. Konrath joins Michael Guest, Kollin Keister, Michael P. Frisch and Collin Bowden as the winners of the season on the playoff grid.

Here's how the points stack up entering the weekend…

And don't forget about SNSL tonight at Daytona in the Xfinity Series cars! pic.twitter.com/c40Rjy5tW0

NASCAR Camping World Truck Series driver Carson Hocevar also has a victory in the series, but is no longer in the top 25 in the standings after missing a total of six races. If he misses this next race at Richmond, he will no longer be eligible to use his victory toward a playoff berth.

After a spirited battle last week at MoSport between Presley Sorah and Adam Cabot which saw Sorah on top, this week Cabot answered back with a dominating performance in the Tufco Flooring 120 at Kansas Speedway.

Anthony Alfredo’s Esports Racing League utilized the 2009 Car of Tomorrow at Kansas this past week for their third race of the season, an 80 lap race without any caution flags and some green flag pit stops.

Cabot took the pole position with Sorah alongside. The pair ran in the Top 2 for the entirety of the night besides a couple of laps where strategies intertwined. Not only were the two fast on track, but they also had the right strategy from the get go. Only a handful of the drivers opted for a single pit stop as opposed to two and it worked out great for Cabot, Sorah, Nick Olsen and Gabe Wood who all finished within the Top 4 spots.

“I was worried from about lap 30 to lap 80,” Cabot said. “I did not realize it was going to be a fuel mileage race. We got towards the end of that first run there and I looked down at my fuel and thought ‘man, this is going to be close’.”

With the result, Sorah only leads Cabot by a single point heading into the fourth race of the season at Knoxville. Brendan Jenks, Craig Janczak and Nick Olsen round out the Top 5 in the standings, still within striking distance with two races remaining.

Postponed from Saturday after a late night rainout in Martinsville, the Mooncar Premier Series returned on Monday night for it’s first of two skill races on the week. The Premier drivers were tasked with racing 43 winged 410 sprint cars on the Bristol Motor Speedway Dirt Track. It did not go well.

Race control was tasked with throwing yellows that did not interfere with the race for the lead, and due to the sheer amount of drivers on the track, the caution waved early and often. Michael P. Frisch took the final restart as the field wrecked behind him. The race was allowed to finish without further stoppage, and Frisch took his second victory of the season.

We'll see you soon with Cup Cars at Long Beach!

Virtual Long Beach was the home for the fourth race of the Mooncar Premier Series on Wednesday night. The NASCAR Cup Series vehicles at an IndyCar track configuration is an interesting combination, but it proved to be a battle of skill when it was all said and done.

Dawson Hess took the pole position and was the dominant car all night long. Michael Cosey Jr. proved to be a challenger throughout, but could not catch or pass Hess. There was a scheduled stage break at lap 10 to bring the field back together and allow for pit service if needed. Davin Cornelius and Tyler Leclair opted to stay out to lead, but both drivers were eaten alive by the pack about halfway through the restart lap.

Once things settled out, Hess re-established himself at the top of the board and never looked back. Hess joins Frisch and Tyler Oneal on the playoff grid as the winners so far in the series.

Watch both the third and fourth race replays over on MoonVision.

The fifth race in the series, NASCAR Xfinity Series vehicles at 2007 Daytona, will be completed by the time this article is published.

COMING UP THIS WEEK

FTF Racing’s Cup Series will also race at Richmond Raceway, live at 8 p.m. ET on BottomSplit. That race will be half distance at 200 laps, and will feature a new wreck score system aimed at curbing caution laps in the remaining 28 events.

The Esports Racing League will run at Knoxville on Monday night at 8 p.m. ET on Podium eSports. Only two races remain to determine a champion. That champion will also receive an invite to compete in the third season of Monday Night Racing.

The Mooncar Premier Series also has some changes in store. Evident on Wednesday, the fast repairs are gone and the cautions will be called by the iRacing AI. Upcoming races will be live on MoonVision throughout the week on Monday, Wednesday and Saturday.

Finally, the eNASCAR iRacing Road-to-Pro Series is back in business at the wildcard on the schedule, Talladega Superspeedway. Podium eSports will carry the call of the top split starting at 9:00 p.m. ET while STN Racing will have the second split at the same time.