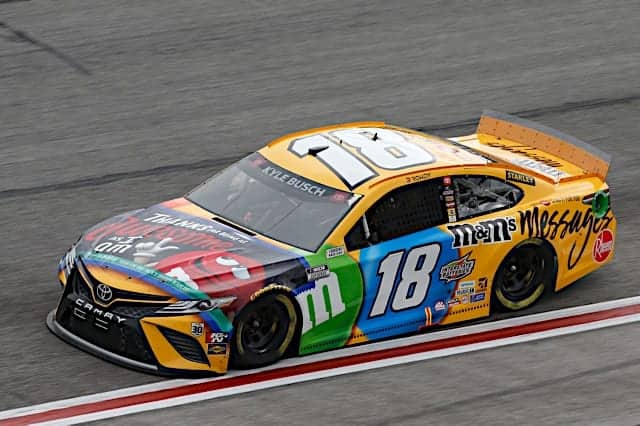 The NASCAR Cup Series heads to another Virginia short track this weekend in Richmond Raceway. Let’s get your daily fantasy NASCAR DraftKings lineup ready for the Toyota Owners 400 on Sunday, April 18.

Though it is a short track, Richmond is vastly different from Martinsville Speedway. It’s a three-quarters of a mile, D-shaped oval with 14-degree banking in the turns. Tires wear down approximately as quick as they do at Martinsville, but the additional banking and sweeping curves allow for multiple racing grooves to form on the track. Drivers who successfully manage their tires do well here and charge to the front.

Multiple racing grooves means multiple lap leaders, right? Not necessarily. Last fall, Brad Keselowski led 192 laps while four others led 40-55 laps. In 2019, both Martin Truex Jr. and Kyle Busch led over 100 laps, with the latter crossing the 200 mark in the fall event. Truex swept Richmond that season, while Busch finished eighth and second in the spring and fall, respectively. It should be noted the 2019 Richmond races were run with tall spoilers currently used on intermediate tracks.

How does this affect your strategy in daily fantasy? Well, you’ll clearly need at least one dominator in your DraftKings lineup. But in order to fit the strong contenders and lap leaders in your roster, you will need the right value plays that won’t bust your DraftKings score.

Finding the right mix was also the case last week at Martinsville; you can see the results of this sample lineup below.

It truly was “Martin’s ville” as Truex chased down his teammate Denny Hamlin late in the race. While these scores weren’t entirely bad, they didn’t have Hamlin’s 145.45 fantasy points. Missing out on that really hurt the total score.

As mentioned earlier, Hamlin flat-out dominated at Martinsville last week, leading 276 laps and recording 81 fastest laps. If you didn’t have Hamlin in your lineup, you probably weren’t going to cash in your tournaments.

The No. 11 Joe Gibbs Racing pilot has been the most consistent driver in the series, with just one finish outside of the top five. Even that was an 11th at Homestead-Miami Speedway, making him the current point leader by a country mile over Truex. At Phoenix Raceway, a one-mile flat track, he led 33 circuits and posted 38 fastest laps en route to third. As a result, his DraftKings score was 66.4 fantasy points.

Hamlin’s also been really good at Richmond, with just two results outside the top six since fall 2015. Unfortunately, one of those came last September where he finished 12th, but he did lead 45 laps.

His average finish is 4.5 eight races into the season; ride the streak while you still can.

While Hamlin has the highest average finish among Cup regulars this season, Busch has the best average finish at Richmond. I mean, to end sixth or seventh on average in 30 starts is insane. Only Hamlin’s 9.2 and Kevin Harvick’s 9.8 come close to Busch’s average result. Plus, he’s won 20% of the time he’s raced at the Virginia track.

Last season was underwhelming compared to previous events; Busch finished sixth after leading just four laps. The year before that, Busch led 101 and 202 laps in the spring and fall races, respectively. The vast difference in dominance could be because there weren’t any practices last year at Richmond due to COVID-19.

That has continued on into this season, as just two events have held practice sessions so far. What looked to be a promising day for the No. 18 team turned sour at Phoenix after getting hit with a pit road penalty. To make matters worse, Busch got turned late in the race and had to settle for 25th. It produced a negative DraftKings score, his second of the season. However, at Martinsville he was able to notch 11 fastest laps and end in 10th.

Look for him to shine at one of his strongest tracks.

Cindric’s mainly here for one reason — he’s starting at the back. Position differential points can be key for you to win your DraftKings contests; if he earns a top 20, that’ll likely pay off his salary.

But the reigning NASCAR Xfinity Series champion is also on my roster because his team has been good at Richmond, too. Keselowski won last season for Penske, while Joey Logano won in spring 2017. Both drivers have been known to lead several laps at Richmond; Keselowski eclipsed the 100-lap mark twice in the last seven races, while Logano led in every other race since spring 2017.

Cindric himself has done fairly well in NXS, with his worst finish of 13th coming in 2018. He was runner-up in both events in 2019, and last season he led 64 laps in the first race of the doubleheader.

I don’t always stack teams but JGR has been stellar at Richmond in the last several races, so I had to include Bell, too. He earned a 15th in 2020 after starting 26th for now-shuttered Leavine Family Racing. But that doesn’t show his talent like his results in NASCAR’s lower series.

Bell has three NXS victories in five starts and has led 457 total laps. His most recent dominating performance came in fall 2019 when he led 238 of 250 laps. It truly shows just how good the whole JGR stable is at Richmond.

Though a starting position of eighth might not help Bell’s DraftKings score in the end, he should be viewed as a contender. At Martinsville last Sunday, Bell recorded 14 quickest laps and led nine circuits en route to a seventh-place finish. The 61.6 fantasy points were his highest on DraftKings since he won the O’Reilly Auto Parts 253 on Daytona International Speedway’s road course back in February.

Suarez doesn’t have as many good results as some of his competitors, but he did finish ninth in the fall of 2019 while driving for Stewart-Haas Racing. The No. 99 Trackhouse Racing pilot is mainly here due to the speed he showed last week at Martinsville. While the day ended in a literal fireball, he recorded 34 fastest laps before that wreck. Suarez also was one of a few drivers to lead over 50 laps at the Bristol Motor Speedway dirt track, helping boost his DraftKings score to 78 points. That’s extremely good value for this price, so you might want to take advantage of it while you can.

Preece is also here due to his speed. At Martinsville, he had the 13th fastest green flag speed, which is really high for the middling JTG-Daugherty Racing team. Unfortunately, his day also ended up in flames after getting caught up in that lap 387 traffic jam. If he and the No. 37 team can find that kind of speed once again, he’ll have a good fantasy DraftKings score.