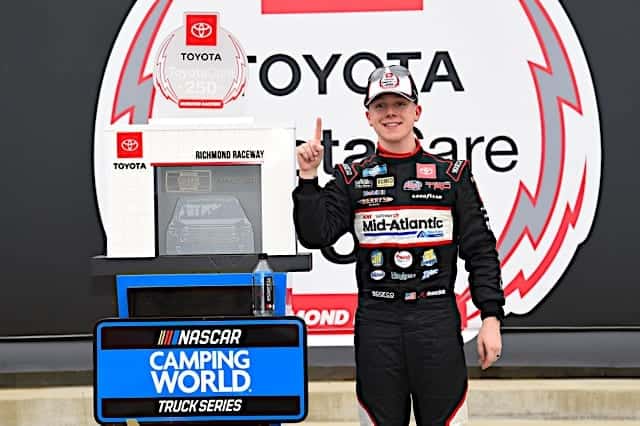 A bevy of cautions didn’t hinder John Hunter Nemechek from victory on a Saturday afternoon (April 17) at Richmond Raceway, as the Kyle Busch Motorsports driver secured his second NASCAR Camping World Truck Series win of 2021 in the ToyotaCare 250.

The victory capped a near-perfect day for KBM, as the Toyota stable was consistently out front or near the top of the leaderboard. Nemechek was followed by runner-up and boss Kyle Busch in the veteran’s first race at Richmond since 2005. Staying out late also paid off for Chandler Smith, who finished fourth to place all three Busch trucks inside the top five.

Nemechek left the last race on the dirt at Bristol Motor Speedway frustrated after crashing, albeit with some help from Matt Crafton. Two days later, though, his wife Taylor gave birth to a daughter, Aspen.

“It’s pretty cool, Taylor and Aspen are actually here in a motor home,” he said in his post-race interview. “So, hopefully, we get to celebrate with them here soon. I know it’s been an amazing time with Aspen so far in this world, and it puts a lot of different things into perspective.”

Enfinger lost a spot on the pit cycle, though, as KBM showed itself as the strongest team early on: Busch and Nemechek started 12th and 18th, respectively, and both raced up inside the top five by the time the first green-and-white checkered flag fell.

Cautions and tight racing plagued the second and final stages, with tensions rising between several pairs of drivers: the first major incident came on lap 85, when contact between Hailie Deegan and Tate Fogleman sent the latter hard into the turn 4 wall.

Fogleman exited under his own power, but emphatically gestured to Deegan as the No. 1 went by under caution.

Busch led at the restart but was quickly passed by Nemechek, who dominated and won the second segment.

The one instance where you don't want to be the meat of the sandwich. ?#ToyotaCare250 | @RichmondRaceway pic.twitter.com/qKda3f1hpo

Cautions started to fly more and more often in the final stage, as Derek Kraus, Chase Purdy and Jennifer Jo Cobb all suffered spins. The incident for Cobb was her second, this time with some help from Norm Benning, and she paid him back by sending herself and the No. 6 spinning on the frontstretch a few laps later.

Yellows for Dawson Cram and Codie Rohrbaugh soon followed, giving way to strategy playing a role. ThorSport teammates Matt Crafton and Johnny Sauter both stayed out alongside six other trucks, but a hard hit for Kris Wright into the inside wall forced another caution. The race was Wright’s first appearance after missing several races due to COVID-19 protocols.

The restart gave way to a KBM 1-2-3 with 30 laps to go with Smith out front, followed by Nemechek and Busch. The latter two drivers, both of whom pitted, ran within a half second of each other almost all the way to the checkered. Busch closed in and sent his truck into the final corner in a last-ditch effort, but Nemechek held on for the win and the team’s fourth straight victory.

“Never give up attitude,” Nemechek said. “…It’s pretty cool to come out here and do what we did. We had a really fast truck. […] I know the president is here from [sponsors] Safeway and Acme, so that’s pretty cool to get them a win on their own turf, and thank you for believing in me.”

Richmond was the only scheduled race for the series in April. They’ll have two weeks off before heading to Kansas Speedway on Saturday, May 1 for a 7:30 p.m. ET green flag. Coverage will be on FS1; Hill, Crafton and Brett Moffitt each won a race there last year.

Only Toys led the event.

It really doesn’t mater what body the trucks have they all have elmore engines in them. Thats why i dont watch anymore. When fords are not fords and chevys are not chevys its just the same trucks with different stickers for the lights, grills, and a manufacturer sticker like it really matters. Perception is everything nothing is real anymore.

O thing but a spec series now. And is that because the costs vs the rewards are out of control? Seems that when the majority of the field is choosing to run spec engines and the series sponsor is providing race sponsorship to multiple contestants something is seriously wrong.

40 trucks are way too many out there. Too many moving chicanes and not enough talent. Some races are up to 50 per cent caution laps. Sad what this series has become.