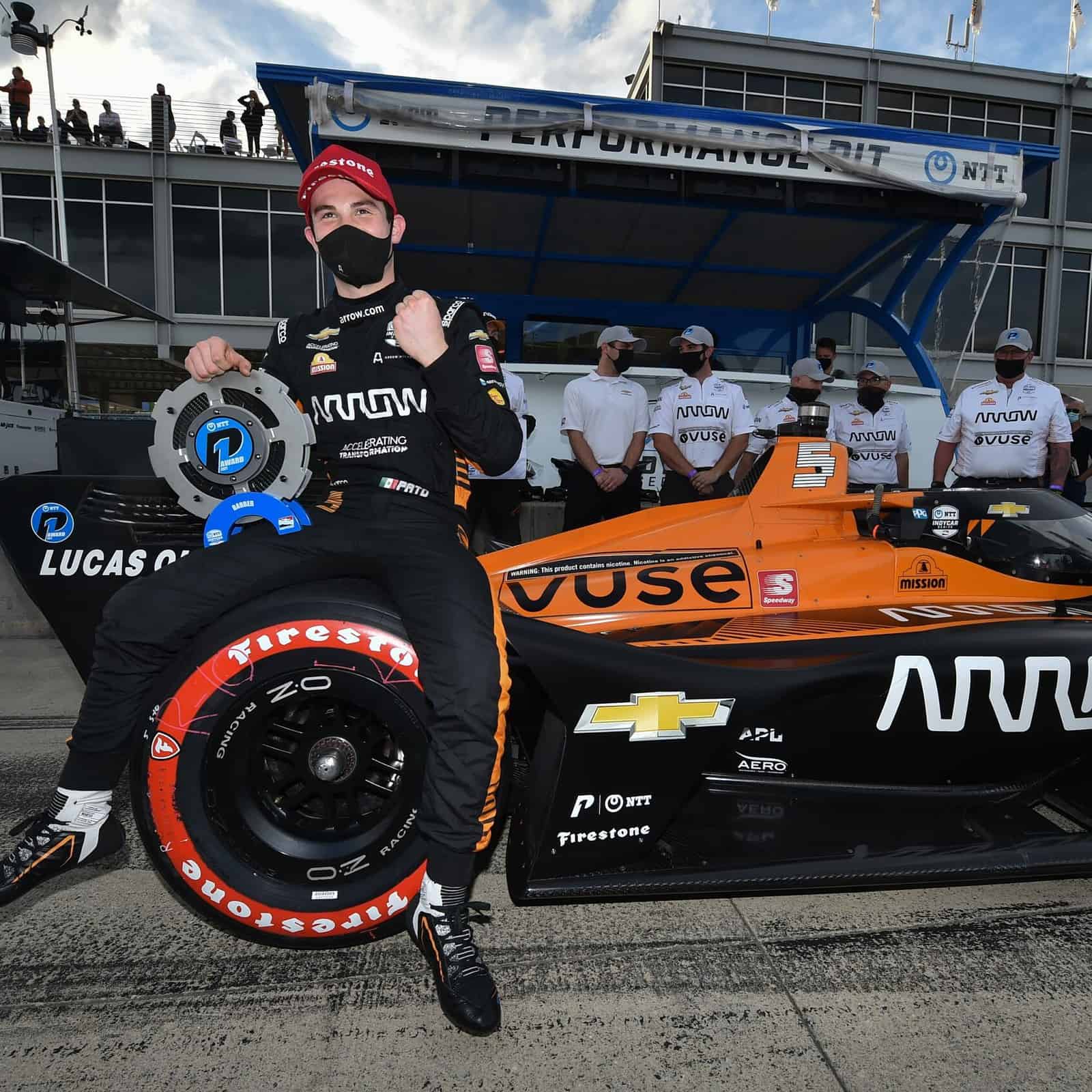 Patricio O’Ward came to Barber Motorsports Park Saturday (April 17) with a point to prove to the IndyCar community. So far, so good.

The 21-year-old racer for Arrow McLaren Racing SP was tired of seeing other drivers winning IndyCar races and took a massive step toward getting his first race victory by earning his second pole in NTT IndyCar Series competition for Sunday’s Honda Indy Grand Prix of Alabama at Barber Motorsports Park.

O’Ward’s fastest lap in the final round of qualifying was run at an average of 125.744 mph around the 2.3-mile natural terrain road course in the No. 5 Chevrolet.

Qualifying second is Alexander Rossi for Andretti Autosport. The No. 27 Honda was just seven-hundredths of a second slower than O’Ward. Filling out the fast six was Alex Palou, Will Power, Scott Dixon and Marcus Ericsson.

This was O’Ward’s second pole position in his brief IndyCar career. The Mexican racer has wins at Barber during his Road to Indy tenure in Indy Lights and Indy Pro 2000 and is looking for the same in IndyCar despite the car not being perfect at the start of the weekend.

“We didn’t quite get an idea of what real pace we had,” O’Ward said. “But I knew exactly what I needed to go faster. My engineer put his magic to work. We had a really, really quick car in reds. We maintained our very good pace in blacks that we had in practice two.

“It was good, man. It feels really good to be on pole for the first qualifying session of the NTT IndyCar Series 2021. These Arrow McLaren SP people have been working really hard. They deserve this. We’ve got a job to finish off tomorrow.”

With new pavement since the last time IndyCar raced here, Palou set a track record with a lap at 125.639 mph. Power, Newgarden, McLaughlin, Ericsson and Harvey advanced to round two.

The odd numbered grid spaces at the back of the grid would be filled out by Jones in 13th, followed by Pagenaud, Hunter-Reay, Sato, Johnson and Kellett in 23rd.

In the second group, Rossi, Dixon, Felix Rosenqvist, O’Ward, Conor Daly, Sebastien Bourdais, James Hinchcliffe, Colton Herta, Romain Grosjean, Rinus VeeKay, Max Chilton and Graham Rahal fought for the six positions to advance to the next round. Not everybody would make it past the end of the session as Hinchcliffe locked up his brakes heading to the turn 5 hairpin, sliding off through the gravel trap and into the tire barrier.

Per INDYCAR rules, the Canadian would lose his two fastest laps posted in the group and would not be allowed to advance to the next session for causing a red flag. Hinchcliffe will start 24th.

As the session progressed, Rosenqvist also had an off-track excursion that required a local yellow flag, and the Swedish driver lost his fastest lap as well. Rosenqvist will start 22nd.

Joining Rosenqvist and Hinchcliffe in the even numbered grid positions will be VeeKay in 14th, Bourdais, Rahal and Chilton, meaning that Rossi, Dixon, O’Ward, Daly, Herta and Grosjean advanced to round two.

In round two, O’Ward would set the fastest lap of the weekend at 126.409 mph, establishing a new track record mere minutes after Palou had done so earlier. Failing to advance to the fast six qualifying round was seventh fastest Grosjean, followed by Newgarden, Herta, Daly, Harvey and McLaughlin.

O’Ward’s pole position is further proof of the effort the team has put in over the offseason. With three runner-up finishes last season, the 2018 Indy Lights champion had great chances for win slip through his fingers, but has learned many lessons.

“It’s a great start to qualifying this year, but we’ve got a job to finish tomorrow,” O’Ward said. “The race is very long. We can’t get too ahead of ourselves. We need to execute. Everybody has to do their job. I think we’re going to be just fine at the end of the race.

“We just need to watch our back in certain yellows that might put you in a difficult position, just pace it out, throw down some good laps. We’re going to have clean air in front of us for at least the first part of the race. But we’ve got a quick car. We’ve got a quick car. Lots of smart guys are going to be finding the optimum strategy, just everything with tires and everything.”

The Honda Indy Grand Prix of Alabama is scheduled to go green at 3:40 p.m. ET Sunday afternoon.  Coverage will air live on NBC starting at 3 p.m. ET with pre-race coverage.

Jimmy is a rolling chicane