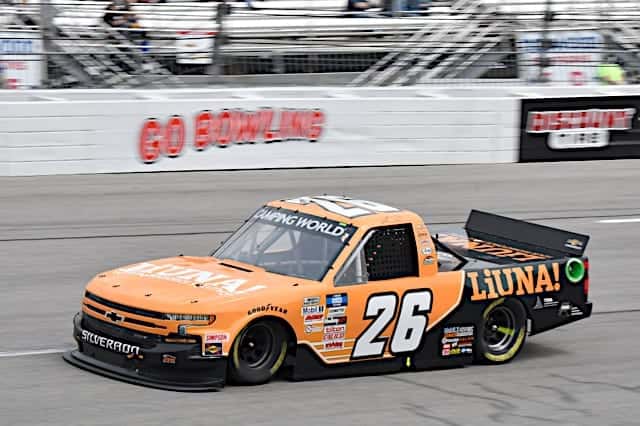 After a rough start to the 2021 NASCAR Camping World Truck Series season, Tyler Ankrum turned his luck around after finishing third Saturday (April 17) at Richmond Raceway. It was Ankrum’s first top five this year, as his previous best finish was 18th at Atlanta Motor Speedway. Additionally, it was Ankrum’s second-consecutive top five at Richmond.

Ankrum had a rough start to the season as he failed to finish three races. Sitting 28th in the standings and ahead of just one full-time driver, Jennifer Jo Cobb, Ankrum looked for a change in fortune at the Virginian racetrack.

After starting 30th, Ankrum had an uncontrolled tire which set him back. Ankrum used strategy to gain track positions by pitting early on lap 179. When the leaders pitted on lap 198, Ankrum stayed out with the older tires. As other drivers who stayed out lost positions, Ankrum and Chandler Smith held their positions within the top five. The 20-year-old broke the top three juggernaut of Kyle Busch Motorsports, passing the No. 18 truck of Smith with seven laps to go.

Ankrum expressed his progress from the beginning of the season to now: “You can’t contend from 30th but what you do is [take] little bits of pie and [accumulate] points.”

“Felt really good about what we accomplished today,” Ankrum told the media after the race. “Charles [Denike, crew chief] told me today as I was walking to the truck, ‘we need to put the past five races behind us, our race season starts today.’ I think we did that.”

Tyler Ankrum, who entered Richmond at 28th in the standings, was happy with a third-place finish. pic.twitter.com/wpRamH5TBG

Ankrum discussed the day’s events that led up to the third-place finish.

“We started 30th, I think by the end of the first stage we were 15th. Then we had an uncontrolled tire on pit road and we had to go to the tail end of the longest line. I think realistically that’s where our day kind of started to take shape. I don’t think if that would’ve happened to us we would have made that call on pit road that we did to get us to the front and be able to run third.

“At the same time I think we just got lucky, because there were so many cars underneath a lap down. We were 40th in the field but on the pylon we were only 22nd. It didn’t take us very long to get through all those lapped cars.”

Solid p3 finish today @RichmondRaceway. We will take it! I just want to say thank you to everyone for the support. We have had a rough start, and today we have turned a corner. Thank you @LIUNA @GMSRacingLLC @charlesdenike my spotter Doug Campbell #26 team @TeamChevy @Josh_Wise

Despite Saturday’s finish, Ankrum still has a long way to go to get into playoff contention. His performance moved him up to 20th in the standings. However, he is still 55 points behind Carson Hocevar, the last driver currently in the playoffs on points in 11th (Grant Enfinger, who is seventh, missed the BrakeBest Select 159 presented by O’Reilly at Daytona and is ineligible for the playoffs). He’ll look to extend his streak at Kansas Speedway on May 1.