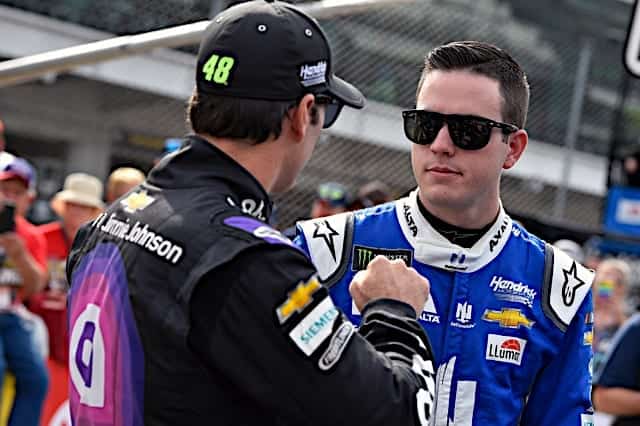 Jeff Andrews was like many of us Sunday afternoon.

Even though the NASCAR Cup Series race at Richmond Raceway was well underway, Hendrick Motorsports’ general manager couldn’t help himself.

He had to see Jimmie Johnson’s maiden voyage in an open-wheel car.

“I won’t lie, I clicked over to IndyCar there a couple of times during the race,” Andrews said April 18. “Just to kind of get a quick peek, see where he was at and see how he was doing.”

Sunday was a big day for drivers of the No. 48 in the country’s two biggest motorsports series.

Johnson, at 45 years old, made his much anticipated debut as an IndyCar driver, piloting the No. 48 for Chip Ganassi Racing to a 19th-place finish at Barber Motorsports Park in Alabama.

Not long after that race ended, the No. 48 returned to victory lane in the NASCAR Cup Series for the first time in a points race since June 2017 at Dover International Speedway.

Instead of Johnson at the wheel, it was his successor: 27-year-old Alex Bowman.

Benefitting from a late caution, Bowman passed Denny Hamlin for the lead with 10 laps to go and went unchallenged to score his third career victory.

It was the first win for Hendrick Motorsports at Richmond since 2008, a race that was won by Johnson when he had only two Cup series titles and when Bowman was a 15-year-old teenager racing USAC Focus Midgets.

It was also the first points win for Bowman’s sponsor, Ally, which began supporting Johnson and the No. 48 team in 2019.

“There’s so many different things going on right now, I almost didn’t even remember that it’s my first win in the No. 48,” Bowman said. “It’s really special for a lot of reasons, just to win for Ally, to get the No. 48 back in Victory Lane. …  Obviously, Jimmie making his IndyCar debut today, really cool. It’s probably over by now. Somebody fill me in on how he did, how eventful it was or wasn’t for him.”

The media had news for Bowman; it was eventful.

On the very first lap, Johnson looked like a veteran as he dodged a huge multi-car wreck. An announcer joked that Johnson had experience avoiding similar crashes at Talladega Superspeedway.

But shortly after the green flag returned, Johnson was in a one-car spin that put him off the lead pace the rest of the day.

For race fans of both series, Sunday was a multi-screen affair thanks to poor network scheduling decisions. Luckily, it wasn’t forgettable.

However, it was a pretty stark reminder that NASCAR and Hendrick Motorsports are no longer Johnson’s playground after nearly 20 years together.

“It’s strange,” Andrews said. “I sent him a text a couple days ago wishing him luck on his new endeavor. When somebody is a pillar like that in your organization, for all that he did for our organization as a driver, as a spokesman, the way he represented our sponsors and our company, you kind of miss those people that in our eyes are kind of role models. That’s really what our company is about. We all really truly consider him a pillar of our company.

“To see him off racing somewhere else, watching how he was doing … We care about him. We want him to have success. Certainly not having him around, not having him in our competition meetings on Monday, our debriefs, not being able to talk to him on pit road, it’s different for sure. …

“Alex, just so proud of him. He stepped up today and got behind the wheel there and brought that famous No. 48 back to Victory Lane on his terms. I’m sure Jimmie is proud of that.”

The significance of the No. 48’s return to Victory Lane, the first time in nearly four years, wasn’t lost on Bowman’s crew chief, Greg Ives.

Ives served as an engineer on the No. 48 from 2006-2013, which included Johnson’s historic run of five consecutive titles.

“It’s been a long history of that number behind my career,” Ives said. “It’s always been a special number for me. When it comes down to numbers, cars, legacy, it doesn’t matter if you’re not winning. That was the ultimate goal, to get the car back in Victory Lane. It didn’t matter necessarily who was driving it, what number it was … it was as a team.”

Thanks for getting the 48 back to victory lane @Alex_Bowman! I’m so happy for you, @Ives_Greg, @allyracing & everyone on the team.