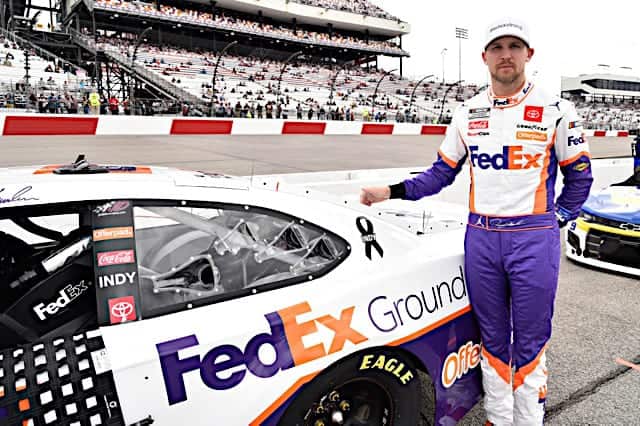 Another race, another dominant performance, but another win slipped through the cracks for Denny Hamlin.

Following a third-place finish at Martinsville where he led 276 of 500 laps, Hamlin was passed with 10 laps to go by Alex Bowman at Richmond for the win after leading six times for 207 of 400 laps and winning both stages one and two, forcing him to settle for second.

“We just didn’t take off very good there,” Hamlin said post-race. “Definitely was worse when our car took off after restart. The No. 48 had his tires pumped up, he was able to take off there, get the lead, build a lead big enough I didn’t have enough time to get back to him”

Despite the obvious disappointment of not grabbing his first win of the season, Hamlin is plenty confident in the No. 11 teams points position and pace moving forward.

Hamlin has yet to do that this season, but is close and will get his share of victories sooner rather than later. But even without a victory and not as many playoff points as his Joe Gibbs Racing teammate Martin Truex Jr., he’s content with where he sits nine races into the 2021 season.

“It doesn’t change my attitude or work ethic. I’m going to work just as hard to win next week and the week after that. You’re a competitor, you want to win. Especially when you have a great opportunity to win. It just didn’t happen. I just got to digest it, look at it and see where we could have been a little bit better. But ultimately there’s nothing I can do. My effort was as high as it could be. There’s nothing that’s glaring that I feel like I could have or should have done different.”

Hamlin has finished inside the top five in all but one race this season (Homestead, 11th), boasting an average finish of 4.2, leading the series. He’s also led at least one lap in every race this season besides Homestead, has a series-high five stage victories and 139 stage points.

He’s not worried about playoff points, either. After racking them up last season and it still coming down to how he finished in the penultimate race of the season at Martinsville, he’s worried about performing on a weekly basis rather than accumulating points.

“If we had this performance, we’ll just go right to Phoenix and we’ll be fine,” he said. “But you can’t plan on that. You could have a bad race, anything can happen. You don’t know what you need until you need it. We’re trying to do the best we can, get all the points we can. Ultimately all we can control is our effort week-to-week.”

Heading to Talladega next weekend, where Hamlin has won twice (including the most recent event there). The GEICO 500 will go green at 2 p.m. ET on FOX next Sunday, April 25.

Why are all these guys beating you Denny ! Why does it happen week after week you have to be wondering. Yep, your smashing them for sure, but it all comes down to that last race Denny, and that worries you.

No it won’t. Maybe by 2:20 if they don’t indulge in too much more pre-event crap. When the NFL says “Kickoff at 1:00 pm” guess what time the kick off is? And NA$CAR wants to compete with the NFL. Go figure.

Hell, if they start it before 3:00 it will feel like a win for we east-coasters.