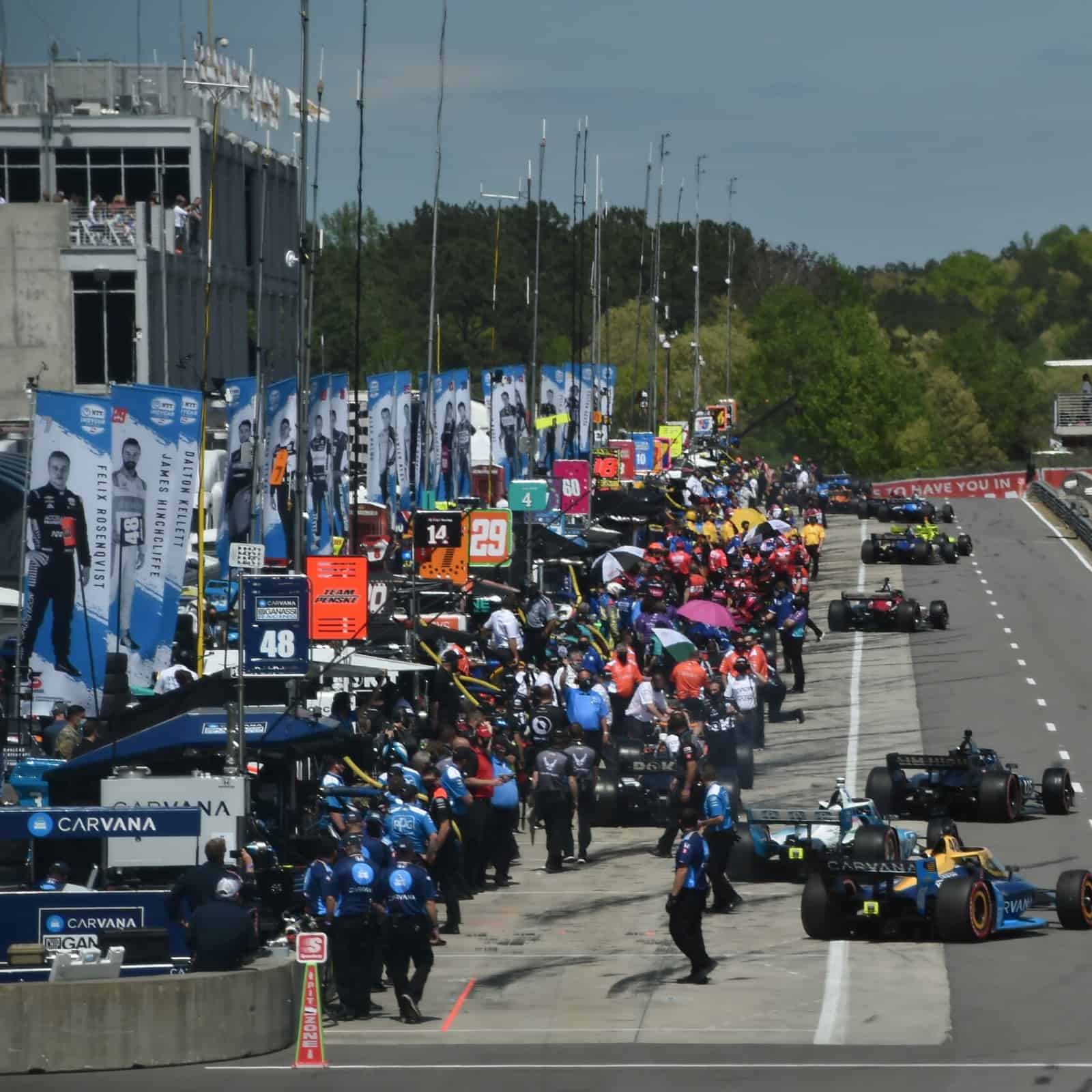 Saturday’s on-track activity for the Honda Indy Grand Prix of Alabama gave the IndyCar paddock a good idea of who the key players will be for Sunday’s season opener for the NTT IndyCar Series. However, some faces that are usually at the top of the grid at Barber seem to be struggling, leading to some rather mixed grid positions. Let’s dive further into the results from Saturday’s on track action and some of the key figures.

Jimmie Johnson ended a long career as a NASCAR ace to start racing Indy cars with Chip Ganassi Racing. The 45-year-old was driving an open-wheel car in anger for the first time and the expectation was to just turn laps, which Johnson did, 39 of them to be exact in the No. 48 Carvana Chevrolet.

“Amazing. Practice one is done, [it was] uneventful, just kind of building my way into things,” Johnson said after the first practice session. “What a rush, though. I mean, these cars are so physical, so demanding, it’s not 2-3 laps in and your tongue’s hanging out and you’re panting just wrestling this monster around the race track. Fun meter is pegged, to say the least and I’m very excited to have this opportunity in the Carvana Chip Ganassi Racing Indy car.”

Johnson’s smile in the Twitter video detailing his first practice session is clear for all to see. He’s enjoying the challenge of learning how to drive an open-wheel car with tons of downforce and grip, a car that, to badly paraphrase Days of Thunder, weighs half as much as his old car with tires that are twice as wide.

The best performing rookie was Romain Grosjean for Dale Coyne Racing with Rick Ware Racing. The No. 51 Honda may have only been 21st and 17th in both practice sessions, but the team made enough progress to give the former Formula 1 driver the opportunity to shine in qualifying.

Grosjean was second fastest in his qualifying group, meaning that the 2011 GP2 champion would start no worse than 12th. In fact, Grosjean would be the first driver outside the cutoff for the Firestone Fast Six, starting seventh.

“What a day, seventh in qualifying, that’s clearly above expectations,” Grosjean said in a team release. “But being so close to the Fast Six, obviously, I was really hoping we would get in but it’s still really great. The Dale Coyne Racing with RWR team really helped me to understand the qualifying tires. We’ve done really good work with the set up and I think we know where to look to go faster which is very positive. We’re going to enjoy this today but let’s focus on tomorrow. We have 90 laps of racing to do, I need to learn tire degradation, fuel saving, refueling, pit stops, how an IndyCar race goes. So, still a lot to learn tomorrow but I’m really happy with today.”

The day belonged to the younger generation of racers, however. The ages of the first three drivers on Sunday’s grid are 21, 29 and 24 years old. Patricio O’Ward, Alexander Rossi and Palou have put the old guard on notice. O’Ward and Palou have podium finishes but no wins, while Rossi has had dominant race wins but hasn’t been able to string together an entire season to win a championship. Can O’Ward and Palou break through for their first wins or will Rossi start off a championship-winning season?

Braden Eves‘ 2020 Indy Pro 2000 season ended early thanks to a broken neck sustained in a crash on the Indianapolis Motor Speedway road course. In his first race since the crash, the Exclusive Autosport driver led every lap to win the first race on the middle step of the Road to Indy for 2021.

Also scoring his first win on the Road to Indy was Prescott Campbell. After winning the 2019 Lucas Oil School scholarship for the 2020 USF2000 season, Campbell learned a lot last season racing for Exclusive Autosport, but with DEForce Racing, the American scored the win, and with it, the championship lead after finishing second in the first race of the weekend.

Also of note, Myles Rowe finished sixth in the second USF2000 race after being involved in an incident on the first lap of the first race. The new Force Indy team formed under the Race For Equality and Change initiative fared well in its first ever outing in formula car racing.