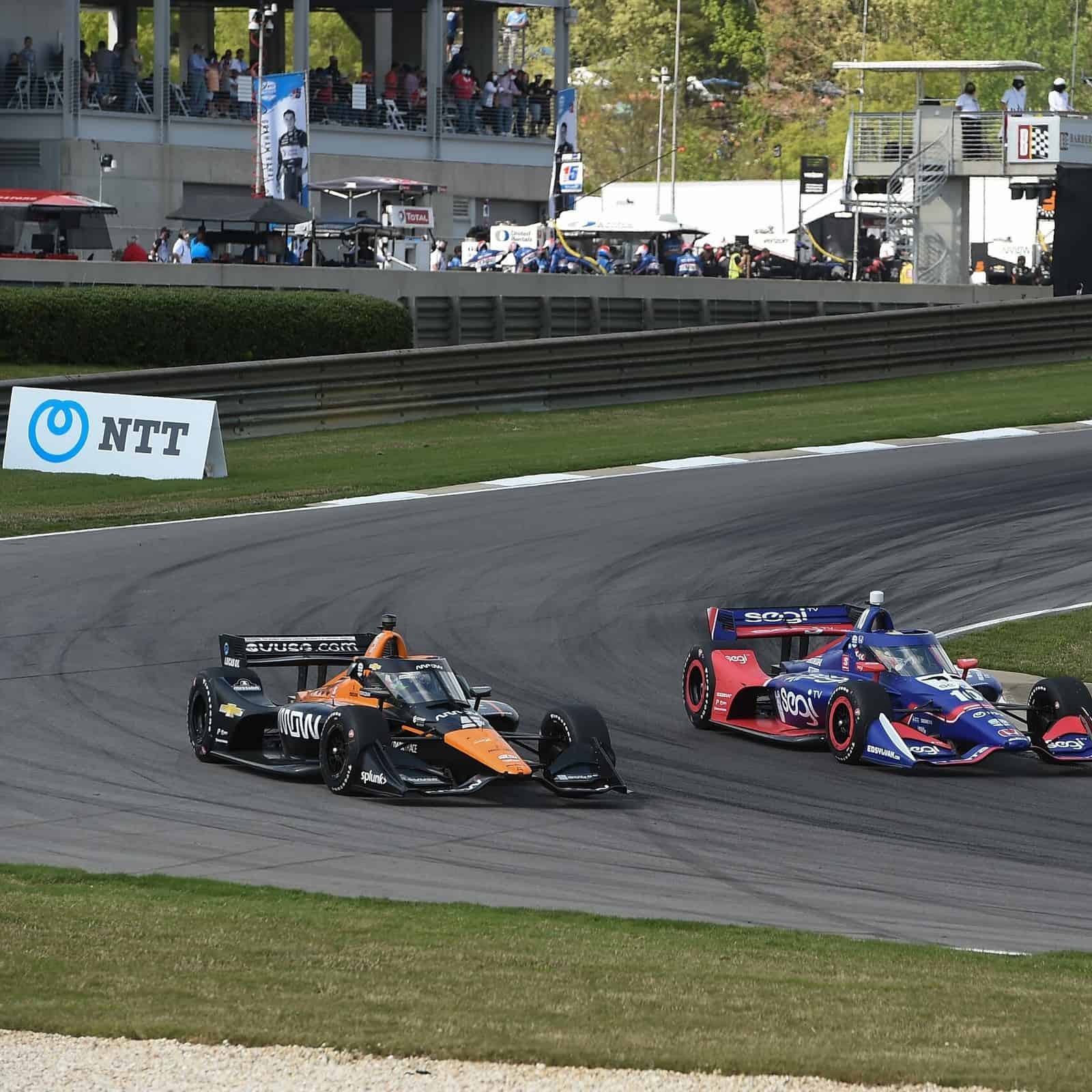 BIRMINGHAM, Alabama — Championship defenses are extremely difficult to come by in the NTT IndyCar Series, so much so that it hasn’t happened since Dario Franchitti won the 2011 title. Scott Dixon started his defense of his 2020 title with another podium finish at Barber Motorsports Park in Sunday’s Honda Indy Grand Prix of Alabama behind race winner Alex Palou and second-place finisher Will Power.

Dixon’s championship defense only got a major boost thanks to the first lap incident taking out two of the key challengers.

Going through turn 4, Team Penske’s Josef Newgarden lost control of his No. 2 Chevrolet and spun, collecting Ryan Hunter-Reay, Colton Herta, Felix Rosenqvist, Rinus VeeKay and Max Chilton. Jimmie Johnson did slide through some dirt and bounce off a couple of cars, but sustained no damage.

Herta and Newgarden were singled out as championship contender drivers in the first 2021 IndyCar season preview article on Frontstretch, but they respectively have eight and seven points, compared to Dixon’s 35. Of course, lightning may strike twice in St. Petersburg and Dixon might be on the receiving end of bad luck as the 2008 Indianapolis 500 winner has five finishes of 15th or worse at St. Petersburg.

Grosjean Keeps it Together in Debut

In his first race since a fiery accident at the 2020 Bahrain Grand Prix badly burned both hands, Grosjean drove like a seasoned veteran to be the highest-finishing rookie after 90 laps.

“It was my first race in the NTT IndyCar Series and my first top 10 finish, so we can be very happy with that,” Grosjean said in a team release. “We fought at the front for some time, and we did our best. We learned a lot today, and overall, we can be very proud of our weekend. (About his first rolling start) The rolling start wasn’t pretty! I got caught a little bit, but I just need to get used to it. It’s not easy. You have to get the right timing, but it was fun. Now we move on to St. Pete where we’ll try to do better.”

After a small mid-race collision with Patricio O’Ward, Sebastien Bourdais suddenly got noticed as someone who was making his way through the IndyCar field.

Starting 16th, the Frenchman made a pit stop on lap 11 under the race’s final full course yellow. Bourdais led laps 34 and 35 before pitting again and would lead lap 62 before making his final pit stop. Bourdais obtained fifth place on lap 77 and was not passed for position again, giving A.J. Foyt Racing their first top-five result at Barber Motorsports Park.

It is worth noting that of the other drivers on the same strategy, VeeKay finished a couple of seconds behind Bourdais in sixth and Jack Harvey was 11th at the checkered flag.

Despite turning the race’s fastest lap and setting a new track record in qualifying, Pato O’Ward was a few seconds short of claiming his first IndyCar win.

Palou parlayed a two-stop strategy into a race win while O’Ward went for three pit stops. Gambling on racing with lighter fuel, O’Ward unfortunately was unable to get up to speed fast enough after pit stops and fell behind Palou. The Spaniard’s pace was enough to give Palou his first win, even as Power closed in during the late stages of the race.

O’Ward gave everything he had but a podium finish was just out of reach, finishing fourth.

“We were the fastest car here all weekend. We were the fastest car on the racetrack during the race. But unfortunately, we were just on the wrong strategy,” O’Ward said in a team release. “We went on a three-stopper to cover for (Alexander) Rossi and unfortunately, track position was everything. When I caught up to the lead pack in the end, there weren’t many laps to go. We got stuck there the last 1-2 laps and brought home fourth. It’s good points for the championship, but we have to maintain the consistency. Our first win will have to wait, hopefully at St. Pete. We will be ready to fight there.”