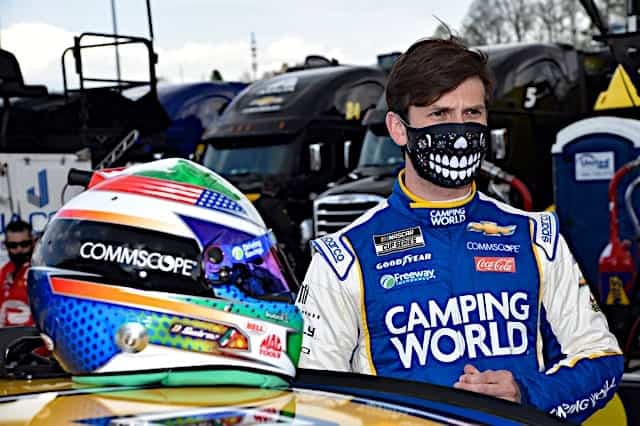 In Sunday’s (April 18) Richmond Raceway event that only saw two cautions for incidents, it was hard for smaller teams to gain traction through the field. In fact, the pace set by Denny Hamlin and Martin Truex Jr. up front was a struggle for many top teams, too. There were just eight cars left on the lead lap before a late caution allowed a few more to grab the wave around at the finish.

Daniel Suarez wasn’t close enough to capitalize, ending the race one lap behind. But the Trackhouse Racing driver turned in another solid performance after a tough break a week ago at Martinsville Speedway that ended with his car ablaze. A 16th-place finish Sunday was his third top-20 result in the last four races as one of NASCAR’s newest teams continues to exceed expectations.

Suarez took some time to adjust to the track with the continuation of no practice or qualifying. He would drive to a 24th-place finish in stage one, struggling to gain traction from his 27th place starting spot.

But stage two gave Suarez a break when Ryan Newman’s No. 6 spun up the track after contact during a green-flag pit cycle. Suarez was one of a small handful of drivers who had yet to make a stop, allowing him to pit under yellow for four fresh Goodyear Eagles and Sunoco fuel for a restart inside the top 10.

The No. 99 Chevrolet didn’t fade quietly from there. Suarez was able to maintain a spot in the top 10 for most of the second stage before some wave around recipients made their way through the field. A solid 15th-place showing, one lap behind, positioned him well for the final portion of the event.

Suarez battled hard during the final stage, sticking inside the top 20. Unfortunately, the speed up front from Hamlin, Truex and Joey Logano was just too much to overcome. Suarez fell two laps down at one point, although he was able to get one back after that late-race caution for Kevin Harvick‘s spin. The yellow flag allowed him to refocus and earn a solid 16th-place result.

First off, a shoutout to Erik Jones for wheeling his No. 43 Richard Petty Motorsports Chevrolet to a 19th-place finish after falling a lap down early in the race. However, another dog began to make a presence in the yard this week.

Corey LaJoie had an eventful stay in NASCAR’s two races in Virginia. He drove into the top 10 on speed at Martinsville Speedway before some contact damaged his radiator, ending the No. 7 Chevrolet’s afternoon. For the second week in a row, LaJoie raised eyebrows, this time finishing off another solid run with his fledgling program at Spire Motorsports.

Like Suarez, LaJoie was a beneficiary of the caution during green flag stops in stage two. The result allowed the No. 7 Schluter Systems Chevrolet to earn some television time inside the top 10.

From there, LaJoie’s name remained inside the top half of the field. There was a slow, steady decline as the race went on, but nowhere near the level you’d see from this team in years past. LaJoie fought stronger teams for position, finishing ahead of three Stewart-Haas Racing Fords.

In the end, a 21st-place performance is a solid result for Spire, especially at a challenging track like Richmond with no practice time beforehand. The showing was not only his best after a ninth in the season-opening Daytona 500, it was his first top 25 since then.

As mentioned, Jones brought home a respectable top-20 result, his fifth of the season. That matches the mark RPM had last season through nine races with Bubba Wallace.

The NASCAR Camping World Truck Series returned to the track for the first time since Bristol Dirt for a race in the Commonwealth. Both Carson Hocevar and Spencer Davis turned in solid performances with runs of 12th and 16th, respectively. Hocevar even spent some time in the top 10 in the closing stages of the race before fading. And Sam Mayer slotted in ninth, turning in a solid performance with Bret Holmes Racing’s part-time effort.

The NASCAR Camping World Truck Series will get another week off as both the NASCAR Cup and Xfinity series head to Alabama for dates with intimidating Talladega Superspeedway.

This 2.66-mile, pack racing track is a gold mine for drivers looking to turn in solid performances. As Michael McDowell showed with this year’s Daytona 500, a win is not out of the question under the right circumstances. Expect both series to produce a list of underdogs running inside the top 10.

That's a wrap from Richmond.

On to @TALLADEGA next weekend! pic.twitter.com/bTyCiQR2fc

P12. Got some stage points after being 6th in stage one. Real happy with our speed lately, just picked wrong lane on last restart that shuffled us back a bit costing a top 5-10 day.

P16 yesterday. Still working on some new set up stuff but @DannyGill71 called a smart race up on the box and gave me a shot at the end to leap frog some spots. Back to the drawing board for @kansasspeedway ?? pic.twitter.com/koAGXG2Ulw

Let’s put Bubba in with the dogs where he belongs

That doesn’t fit the story line the networks are trying to feed us.