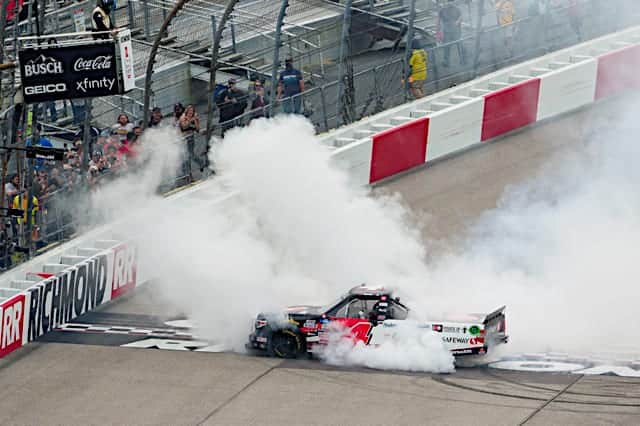 After going caution free for the entirety of the 70-lap stage one, the field was slowed 11 times for 79 of the final 180 circuits. Only six trucks failed to finish the race, despite multiple incidents.

Grant Enfinger, who has something to prove every time he’s behind the wheel in his part-time schedule this season, started third and spent just two laps before taking the top spot from teammate Ben Rhodes after the green flag flew. He led the next 71 laps until the field made pit stops under the stage one ending caution but didn’t take the top spot for the remainder of the 250 lap race.

Though he remained inside the top 10 for the rest of the race, Enfinger didn’t quite have the speed to contend with eventual winner Nemechek. He never led again and ultimately settled into an eighth-place finish after getting shuffled back through multiple restarts in the final 50 laps.

After an abysmal start to 2021 that included three DNFs and a best finish of 18th in the first five races, Ankrum posted a much-needed top five run. After racing his way into the top 10 from a 30th-place starting position, he got hit with an uncontrolled tire penalty and was dropped to the rear of the field where he essentially had to start over again. But patience, combined with pit road strategy that saw Ankrum, along with a handful of other drivers, stay out under a late-race caution while others pitted for fresh tires put him in position to score his season-best third-place finish, even if that did mean muscling third from Chandler Smith.

See also
Tyler Ankrum Living For a Run Like This

Well then… @TylerAnkrum just said "scuse me, pardon me, coming through." #NASCAR

Shortly after stage two started, the first of what turned out to be nine cautions for incidents on the track flew when Hailie Deegan and Tate Fogleman got together, sending Fogleman into the outside wall. A replay showed the rookie Deegan moving up the track before the two made contact. Needless to say, Fogleman wasn’t pleased with the contact that ended his day.

Mistakes certainly happen, especially for a rookie driver, but what stood out to me was that FOX Sports 1 commentator Michael Waltrip tried to clear Deegan of the blame in this situation. The replay told a different story, though, as it showed Deegan sliding up the track and into Fogleman before sending him into the outside wall. FS1 did not speak to either driver to get their take on the contact, though.

Interesting to listen to FS1's slant on the Deegan/Fogleman wreck. 1 says "when he got into her" when the replay shows the opposite happened. Another says she's "had a quiet run today" after she caused a wreck to bring out the yellow. Hope they talk to @tate_fogleman #NASCAR

Despite late-race contact with Sheldon Creed, Austin Hill’s 10th-place run marks his fourth straight top 10 after starting the season with finishes of 22nd and 33rd at Daytona International Speedway and the Daytona road course, respectively. He’s moved from a season-low 23rd in the point standings to fourth where he currently sits more than 70 points behind leader Nemechek.

After missing two races following a positive COVID-19 test, Kris Wright returned to the No. 02 Young’s Motorsports Chevrolet. He started 22nd but didn’t get the race he wanted when it ended in a DNF with a wreck inside 40 laps to go. Wright finished 35th.

A big hit for Kris Wright at Richmond. pic.twitter.com/ldAr4cOLKd

Nemechek’s second win this season also marks the fourth in a row for Kyle Busch Motorsports. The driver of the No. 4 Toyota holds the first and fourth wins in the streak, while Busch (Atlanta) and Martin Truex Jr. (Bristol dirt) have the other two.

Taylor Gray was originally slated to make his Truck Series debut behind the wheel of the No. 17 David Gilliland Racing Ford, but that debut was postponed after Gray was involved in a single-car road accident on April 7.

Both of our F-150s will be carrying a Get Well Soon Taylor decal today.

Wish you could be here racing with us, @TaylorGray17_! pic.twitter.com/iIim1XKnLZ

No. of rookies in the top 10: 1; Chandler Smith, finished fourth

Point Report: Nemechek holds a 20-point advantage over Rhodes, while Creed remains third. Austin Hill moved up two spots and entered the top five for the first time this season; he sits fourth, 74 markers behind the leader. Matt Crafton, who dropped one position rounds out the top five.

Solid p3 finish today @RichmondRaceway. We will take it! I just want to say thank you to everyone for the support. We have had a rough start, and today we have turned a corner. Thank you @LIUNA @GMSRacingLLC @charlesdenike my spotter Doug Campbell #26 team @TeamChevy @Josh_Wise

.@CSmithDrive piloted the @JBLaudio Tundra to a fourth place finish at Richmond Raceway. The rookie driver explains his day: pic.twitter.com/50CXYBK0YG

We where in the top 10 all day as high as 3rd got jumped by some guys on pit strategy and finished 6th. Good solid day for us, we’ll keep working! Thank you @ThePeteStore for coming on board! @Team_FRM @FordPerformance pic.twitter.com/yxRQfOQdYP

Man what a day. +31 spots! Just a couple short of a perfect day ?. Thanks @bretholmes23 and the whole #BHRacing team. @QPS_Employment @TeamChevy

Well our Motto is minimize mistakes and I didn’t do a good job of that today.. Speeding on pit road put us back in traffic and the cautions kept falling at the wrong time for us. @Hattori_Racing brought a fast tundra but I didn’t execute very well today. Ready for the next one.

Hard fought p11 finish today, thought we had a top 10 run going there until the 16 shipped us, anyway big gains from how we fired off the day, #keepontruckin pic.twitter.com/YIqOe4cpo6

Up Next: The Truck Series takes a weekend off before heading to Kansas Speedway on Saturday, May 1. Coverage for the Wise Power 200 begins at 7:30 p.m. ET on FOX Sports 1.