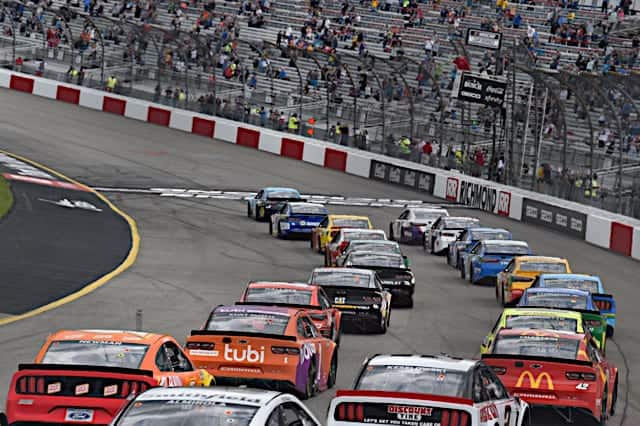 1. Alex Bowman Breaks Through at Hendrick

On The Doors’ 1967 debut album, the band led off with “Break On Through (To the Other Side)” as the first track. Jim Morrison howls the titular lyric over and over. Nine times, to be exact.

A full 54 years later, at Richmond Raceway on April 18, Alex Bowman broke on through (to the lead) in Virginia.

Bowman rode around in the top 10 for the majority of a balmy afternoon in which the temperature never topped 70 degrees, the sky a nice mix of sunshine and clouds that gave way to rain long after the 2021 Toyota Owners 400 had concluded.

But he hadn’t really shown what seemed to be race-winning speed. That was exuded by three other cars, for the most part: Virginia native Denny Hamlin led 207 circuits, his Joe Gibbs Racing teammate Martin Truex Jr. was out front for 107 and Team Penske’s Joey Logano helmed 49.

The No. 48 sat third on the restart, and it took just two laps for Bowman to pass Hamlin, briefly dueling with the No. 11 before clearing his Toyota.

Bowman led just 10 of the race’s 400 laps — but they were the most valuable circuits of the race. While lapped traffic nearly held him up in the closing laps, allowing Hamlin to get too close for comfort, the No. 48 held on.

He also brought Hendrick Motorsports back to victory lane at the 0.75-mile oval in the Commonwealth after nearly 13 years on the outside looking in, the most recent being Jimmie Johnson‘s triumph in the fall 2008 Chevy Rock & Roll 400. Maybe the fact that the 2009 edition of that race was the last to carry Chevy branding sparked this drought.

The win was the first points-paying one for the No. 48 since Johnson won at Dover in June 2017. It was also the first points win, period for the car and sponsor Ally Financial’s pairing, which has been intact since the beginning of 2019. Johnson also won the season-opening 2019 Advance Auto Parts Clash at Daytona with Ally backing, but that event was not a points-paying race.

Bowman has also steadily improved at Richmond, capping it off with the win Sunday. He hadn’t finished better than 28th at the track prior to joining Hendrick in 2018 but immediately reeled off three top-20 finishes in the next four races there. Bowman wound up ninth last fall and bounced all the way to the top of the scoring pylon seven months later.

2. Daytime Again at Richmond — and Cautions for Incidents!

Maybe it was the switch back to a daytime spring race that caused a few more cautions on Sunday, but regardless, yellows did fly for things other than competition stoppages and stage conclusions.

There were nearly 600 laps turned at Richmond since the last caution had waved for a crash. That was way back in fall 2019, since Richmond only had one race last year due to the coronavirus pandemic, when then-leader Truex was turned around by Ricky Stenhouse Jr. (Truex went on to win).

Richmond has a predilection for long, long green-flag runs and largely incident-free races, at least over the past couple of years. Last fall’s race had zero cautions for an on-track occurrence. This one had two. It’s not a huge change, but after a Ryan Newman spin early in the race, the other drastically altered the outcome: Hamlin and Logano were battling hard for the lead when Kevin Harvick backed his Ford into the fence with a flat tire, allowing for one more round of pit stops and Bowman to springboard to the front during the frantic dash to the finish.

Incidentally, Bowman was involved in one of the last incident-related cautions prior to this race, when he and Austin Dillon got together in the fall of 2019 and the then-driver of the No. 88 delivered one of the most memorable quotes of the season.

"I'm gonna shove that silver spoon he's been fed off all his life up his ass," — Alex Bowman says about Austin Dillon

3. Truckin’ in the Commonwealth

The NASCAR Camping World Truck Series made a second visit to Virginia last year for the first time since 2005, this time racing in the light of day at Richmond.

Last year’s race was pushed to September from the originally scheduled April date due to COVID-19, a race that Grant Enfinger won after he chased down ThorSport Racing teammate Matt Crafton in the waning laps.

This time, Enfinger looked to be in pretty good shape early on. He led 71 laps in total and won the opening stage, but soon after that, Kyle Busch Motorsports took over. John Hunter Nemechek and Kyle Busch, who started 18th and 12th, respectively, made their way toward the front and took control. Busch could never hang on to the lead for good, leading just 26 circuits, as Nemechek was nothing short of dominant.

The new father led 114 laps, won the second stage and more or less cruised to the win, his second of the year and eighth career triumph. It was also a solid rebound for Nemechek, who was turned off the bumper of Crafton on the dirt at Bristol Motor Speedway a few weeks back in the series’ previous event. As if the damage to his truck from the wreck wasn’t enough, a safety truck lost grip on the surface and tagged the No. 4 truck as it sat on the apron.

No wayward, extraneous vehicles damaging his truck this time. Nemechek rolled into victory lane at Richmond and now leads the standings by 20 points over Ben Rhodes.

4. IndyCar Opener: Chaos, a First-Time Winner and a 45-Year-Old Rookie

I decided to check in on the NTT IndyCar Series race on Sunday. NASCAR had been underway for a few minutes and, as a general fan of everything motorsports, from stock cars to rally racing, I always look forward to its season getting underway as well.

I flipped to that channel, looked down for five seconds, turned my attention back upward and everyone was wrecking.

Two-time champion Josef Newgarden got loose not 20 seconds into the race, spinning sideways on a straightaway and collecting six other competitors. Three of their days — those of Colton Herta, Ryan Hunter-Reay and Felix Rosenqvist, the latter of whom caught a bit of air — were done, along with Newgarden’s.

Replay of the incident involving multiple cars on Lap 1 at @BarberMotorPark.

Then, 10 laps later, rookie Jimmie Johnson (it’s already been described as such a million times, but it’s still so weird to say) spun, but didn’t make any contact and continued on his merry way.

It was a big day for drivers named Alex, though, as sophomore driver Alex Palou ended up in victory lane. Palou debuted last year with Dale Coyne Racing’s Team Goh satellite, recording a podium in just his third race at Road America but otherwise generally running midpack for most of the year.

Sunday, however, was his day. After joining Chip Ganassi Racing for the 2021 season and replacing Rosenqvist, Palou employed a two-stop strategy to get by a dominant Patricio O’Ward and secure the lead, winning by just shy of half a second over Will Power. Reigning champion Scott Dixon literally picked up where he left off, finishing third behind Palou and Power (Dixon also came home third in the 2020 finale).

For what it’s worth, across the pond in Italy, Max Verstappen held on to win the Formula 1 Emilia Romagna Grand Prix over Lewis Hamilton. Verstappen now sits a single point behind Hamilton in the 2021 standings.

The biggest takeaway? Sunday was a pretty big day for drivers whose forenames end with the letter X.

5. And Now for Something Completely Different

The last few weeks have been similar for NASCAR on one level or another. All three races have been on short tracks 0.75 miles or less, albeit with Bristol racing taking place on dirt, and all featured close-quarters competition.

This week, the Cup drivers head back down south, some 10 hours and 600-plus miles to 2.66-mile Talladega Superspeedway.

The mammoth Alabama track (two Richmonds and one each of Martinsville and Bristol could fit inside its length) couldn’t be more different in terms of racing, attitude and incidents from the previous three tracks. No Monty Python antics here (see: the title of this section).

Last year, Ryan Blaney went to victory lane in the COVID-postponed running of the GEICO 500, the first Cup race in several there that hadn’t featured a flip. Kurt Busch was Given to Fly (another music reference, this time Pearl Jam; I’ll stop now) at the fall race, but didn’t end up inverted like Kyle Larson and Brendan Gaughan did in 2019’s spring and fall races, respectively.