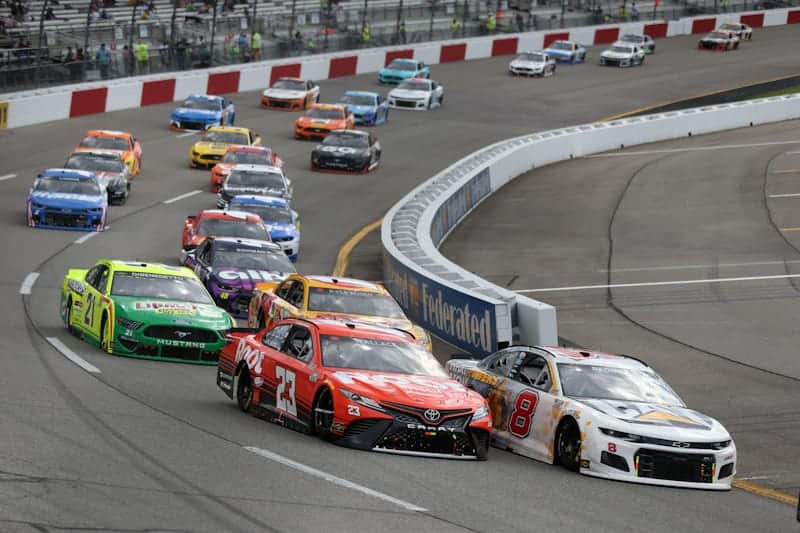 Last weekend, NASCAR traveled to Richmond Raceway for a doubleheader and spectators ended up with two completely different races.

The NASCAR Cup Series event was relatively clean, which was expected going in. But it ended up being even cleaner than I thought it was going to be with just a handful of incidents.

Meanwhile, Saturday’s truck race was a wreckfest in the final two stages. Let’s dive in to how the FOX broadcast team covered each event.

Sunday (April 18) brought the Cup teams back to Richmond for 400 laps on the tricky D-shaped oval. The race was generally pretty clean, but satisfying to an extent.

The more I watch Cup races at Richmond, I’m reminded of events held at another track that has gotten a lot of press in recent weeks. That, of course, is North Wilkesboro Speedway.

For years, fans have clamored for either Speedway Motorsports Inc. to revive the property or sell it to someone who would. Personally, I don’t see either happening at this point since it is effectively a gut job now.

However, if you’re looking for a track that races like North Wilkesboro, Richmond is probably the closest you’re going to find to it, even though it has a very different configuration. The old five-eighths-mile oval in North Carolina was no stranger to clean short track races. The last caution-free short track race for the Cup Series was held there in the fall of 1992.

The final nine Cup races at North Wilkesboro averaged three and a third cautions per race. A number of the recent Richmond events have looked like that. Add in high tire wear, and I think you see where I’m going with this comparison.

If you’re going to have races like Richmond, it will test the broadcasters’ ability to show battles throughout the field. Sunday’s race saw Denny Hamlin and Joey Logano lap up into the top 10. Penalties to Martin Truex Jr. and Kyle Busch made it even more of a runaway. If you maintain a focus solely on the very front of the field, you’re going to bore your audience to tears, no matter the length of the race.

In this regard, FOX did well early on. Viewers got plenty of on-track action for positions throughout the grid. As the race wound on, though the focus narrowed. The broadcast was lucky Hamlin and Logano found each other late in the race, as focusing on that battle masked the fact they were legitimately half a lap ahead of Christopher Bell in third. Had that not happened, I’m not sure what the broadcast would have looked like.

Despite a generally clean race, the broadcast went up against the end of the timeslot on FOX. As a result, post-race coverage was brief. Viewers only got a couple of post-race interviews and a check of the points before leaving the track.

Richmond races in recent years have not necessarily been the most exciting. The lead-up to this weekend featured numerous references to the spring 2008 race where Busch dumped Dale Earnhardt Jr. in the closing laps, allowing Clint Bowyer to win. The one time I went to the NASCAR Hall of Fame, that incident was in an exhibit where you could call your own segment of a race.

Heck, Richmond wasn’t even that competitive back then. Take away the cut tire for Hamlin and he has the most dominant short track performance in the past 40 years in 2008. He’d led all but one lap in that race up to the point that tire ruined his chances.

Richmond lived up to the track’s recent reputation Sunday. FOX took what they got and did OK with it. Nothing special, but the broadcast didn’t actively hurt itself, either.

Unlike the Cup race, you didn’t really need to worry about a lack of action Saturday in Richmond. 40 trucks on a three-quarters-of-a-mile track provides plenty by itself.

Of course, being FOX Sports 1, there’s some strange stuff going around. Ryan Truex did an interview with Michael Waltrip at what I guess is his house for his podcast, The Hot Seat with Ryan Truex. Since Truex is sponsored by Marquis Spas, the interview took place in a hot tub. Viewers were treated to the site of Waltrip in a Peeps T-shirt three sizes too small and (I guess) swim trunks straight out of 1979. That was a thing.

For me, likely the most ridiculous part of the race was the whole mess with Jennifer Jo Cobb and Norm Benning.

Cobb didn’t exactly have the best day; her No. 10 was significantly off the pace. She got spun out early in stage two by Howie DiSavino III. Later on, she spun on the backstretch after contact with Benning exiting turn 2 on a restart.

The coverage of the intentional crash was a bit more emphatic on radio (which is where I initially listened) than on TV. There, they point-blank stated that Cobb slowed and waited to dump Benning. This accusation was backed up by the broadcast that showed Cobb getting lapped a couple of laps after the restart. It was basically the Richmond version of when Boris Said sought payback on Rich Bickle at Sonoma Raceway in 1997.

In that circumstance, Bickle had nerfed Said off course a little earlier. The curly-haired one was not pleased, and neither was Cobb on Saturday.

Waltrip and play-by-play announcer Vince Welch said on air they thought Cobb’s actions were intentional on Benning. They hadn’t replayed the previous spin until after the intentional wreck, though. As a result, they didn’t really know what caused the whole mess until after the fact. That’s why you can’t ignore this stuff, because it can (and often does) affect the rest of the race.

Officially, NASCAR parked Cobb due to failing to meet minimum speed. Based on what she was doing after the second wreck, I’d agree. She was putting around at 70 mph, which is far below average at Richmond. The crash just made it worse. According to NASCAR, it did not play into their decision to not approve Cobb to race in Sunday’s GEICO 500 at Talladega Superspeedway, but I thought when this issue happened it would not have helped her case by any means.

Let’s get back to the race itself. Once you got through the extremely bland command to start engines (where you could hear someone say “that was the worst one ever” in the background), we finally got to the action (but not before Welch tried to defend the grand marshal). For Richmond, FS1 didn’t have a guest analyst in the booth. As a result, it was just Waltrip and Welch up there.

For some reason, FS1 has had some technical problems in recent weeks. Not sure what’s going on, but I can tell you that in the opening laps of Saturday’s race there was a series of strange cuts to commercial seemingly out of nowhere.

For example, on lap 10, FS1 was showing Sam Mayer (who drove exquisitely to finish ninth after starting 40th Saturday) battling for position with Danny Bohn. All of a sudden, there was a quick cut to a Safelite commercial, interrupting Welch mid-sentence.

Knowing that the channel logo stayed on screen when this cutoff happened indicates to me there was something wrong with the network. It wasn’t referenced on the broadcast, so I think something happened in Los Angeles, like someone brushing the button at master control or something.

The first wreck involving Hailie Deegan was somewhat strange coverage-wise. It appeared that the booth (Waltrip, at least) wanted to try to give Deegan the benefit of the doubt after she had contact with Tate Fogleman. In fact, it felt like they tried to blame Fogleman for the crash. In reality, Deegan drifted up the track for some reason, leaving Fogleman nowhere to go but into the rear of the No. 1.

I’m not really sure what happened here, because the replay picked up the wreck way too late. Based on radio chatter that was played on the broadcast, Deegan was apparently racing Codie Rohrbaugh at the time and didn’t see Fogelman coming.

Later on, Deegan had contact with Chase Purdy, spinning Purdy into the wall. I’m not really willing to put that all on Deegan, though. They were four-wide at the time, which rarely works at a short track.

In and around the wrecks on Saturday, FS1 seemed to do a decent job in bringing the on-track action to viewers. There was a good amount of racing to be had for position. It’s not FS1’s fault that the race effectively turned into a Kyle Busch Motorsports and Toyota showcase at the front. Even now, with Toyota in year No. 18 in the Camping World Truck Series, that kind of thing still ticks some race fans off (I’m neutral).

Since there were 11 cautions for 79 laps, the race ended after its scheduled timeslot. As a result, viewers only got see the winner’s interview with John Hunter Nemechek before FS1 left Richmond to get to Fenway Park to air the Boston Red Sox-Chicago White Sox game where the Red Sox debuted their new yellow and light blue “city” uniforms. Let’s just say that those jerseys haven’t been well received.

That’s all for this week. Up next is Talladega Superspeedway, where NASCAR travels for some high-speed antics. I think that’s a good way to describe it. Xfinity Series teams race 300 miles on Saturday, April 24 while 500 big ones are tap for Cup teams Sunday. Anything can happen. Meanwhile, the NTT IndyCar Series will be back in action on the streets of St. Petersburg, Fla. TV listings can be found here.

I will provide critiques of the Cup and Xfinity races at Talladega for next week’s edition of Couch Potato Tuesday here at Frontstretch. The Critic’s Annex this week will cover Sunday’s Honda Indy Grand Prix of Alabama from Barber Motorsports Park. Scheduling this race up against the Cup one was a pretty terrible idea. I will have more thoughts and a full critique in the Frontstretch newsletter on Thursday.

Maybe 20 years ago Richmond raced like Wilkesboro. Richmond since then has been a short track that races like a clone track.

It seems to be a road course with two identical left turns. Kinda boring in my opinion.

It seems like the stench of all those years as the host of the “regular season” finale has scarred Richmond permanently.
Such a sad descent.