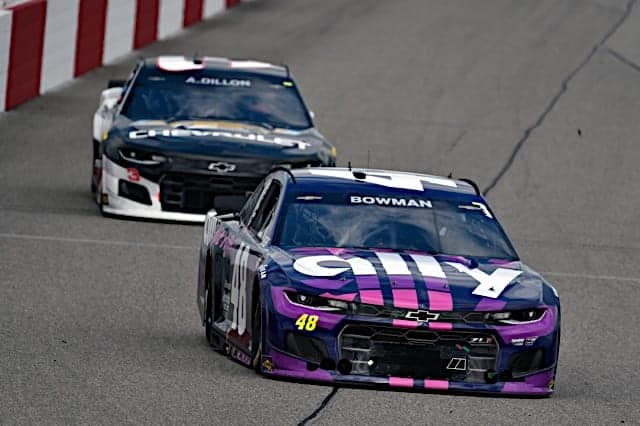 Dr. Eric Warren, the director of NASCAR programs at General Motors, had plenty of reasons to be happy on Monday (April 19).

The previous day, Alex Bowman and his No. 48 Chevrolet capitalized on a late caution to swoop in and capture the win in the NASCAR Cup Series race at Richmond Raceway.

Hendrick Motorsports and Chevy got the glory in a race sponsored by Toyota. As an added bonus, it was a weekend where Ford was celebrating “Mustang Day,” the anniversary of its signature car launch.

Despite a fast No. 48 Chevrolet, Bowman wasn’t a huge part of Sunday’s narrative, as the Toyotas of Denny Hamlin and Martin Truex Jr. led 314 laps while the Fords of Joey Logano and Brad Keselowski paced 74.

The winner was surprised by the result.

“Not necessarily because it’s a short track,” Bowman said. “Just because it’s Richmond. We’ve had some pretty painful days here in the past. Really, really struggled.”

Bowman and crew chief Greg Ives previously had one finish better than 12th in five starts together at Richmond.

For Chevrolet, Sunday’s trip to victory lane was only its fifth at Richmond in the last 24 visits to the 0.75-mile short track.

“As a whole, we still recognize we got work to do at Richmond,” Warren told Frontstretch Monday. “But Alex and even (William Byron) kind of chipped away up there toward the last half of the race. … I think that it took a while to get there and then the door of opportunity opened up. That’s all you can hope for and then be able to get through.”

It may have worked out, but it’s a far cry from the days of 1998-2008. In that span, Chevy and its sister brand, Pontiac, claimed the trophy in 14 of 24 Richmond races. That stretch ended with six consecutive victories and was capped off by a Jimmie Johnson win, Hendrick Motorsports’ last there before Bowman’s triumph.

As the former technical director at Richard Childress Racing with a background in aerodynamics, Warren knows a thing or two about racing trends.

“Richmond’s kind of one of those places where you get a little bit of all the effects (of short track racing),” Warren said. “It’s fast enough to have some downforce, but not be a big downforce track with tires always falling off there. And you got kind of multiple lines. So really, it brings out the true short track capabilities of the car we’re in. It’s a little bit unique compared to all the other tracks, which is something that guys hit on for certain years. And then, in other years, combination changes with a tire or whatever and they can’t quite get it sorted out.”

Bowman’s unexpected Richmond win could be viewed as a small result of an overall course correction by GM in recent seasons.

In October 2020, Warren started applying the knowledge developed from working with specific organizations — like Richard Petty Motorsports and Michael Waltrip Racing — toward “nudging” Chevrolet’s NASCAR teams “closer together and … encouraging (a) collaborative atmosphere.”

His appointment to oversee GM’s NASCAR programs was one part of a huge overhaul by the manufacturer in how it conducted its racing business.

“A lot of the restructuring happened for multiple reasons, but one was GM moved the racing program from out in marketing to up under engineering, which is a definite change within the company,” Warren said. “Motorsports plays a natural fit in the engineering collaboration. So that’s been the biggest thing, connecting with different resources inside of GM, how to tap into that and what’s possible. And then learning where all the budget was from my perspective, where were we being effective with it and how do we need to change.”

Warren credits the initiative of the Chevy-backed team owners for being the force behind a change in culture for GM during a period where the manufacturer got locked out of the Cup Championship 4 each year from 2017-2019.

“Rick Hendrick, Richard Childress, Chip Ganassi got with Mark Reuss, president of GM and said, ‘All right, look, we’re tired of getting beat,'” Warren said. “So the whole project came from the push from the leadership of GM and leadership of the race teams. It started multiple years ago in this push to do more common things. … The money from the OEMs was being divided out into three and four and five ways. And so, there got to be this discussion of if we’re going to, one, survive and two, improve, we got to do a lot more of it collaboratively.”

An early aspect of that mindset was the Camaro ZL1 1LE body that was introduced in 2020.

“We worked together for two years on the car that we really raced this past season and ultimately won a championship with,” Warren said. “It was, we felt like, a partial step forward to where we need to go.”

Another change in resources was last year’s team-up of GM’s primary engine builders, the Richard Childress-owned ECR and Hendrick Motorsports.

“The (2020) season you could argue was a step up, but it wasn’t as far as we wanted to go,” Warren said. “Toward the end of the year, we really started hitting our stride, and a lot of the engine collaboration really helped.”

See also
NASCAR Stat Sheet: The No. 48 Is Back

In the wake of that overhaul, Chevrolet has won three of the first nine Cup races of 2021 (one more than at the same point in 2020). It’s also won five of the last 11 races. All those wins are by Hendrick cars and include Chase Elliott claiming the final two races of 2020 and the Cup title, Chevy’s first since 2016.

“I think it’s made a huge difference for both programs,” Jeff Andrews, general manager of Hendrick Motorsports, said Sunday of the merger with ECR. “There have been nothing but positives that have come out of that on all fronts. Of course, ultimately you hope those kind of things have some quick performance advantages for both companies. Since we started taking a look at that mid-summer last year, been really proud of both groups. Jim Wall, who runs our engine program, and Richie Gilmore (president of the) ECR engine program, both of those guys have locked arms.

“We’re working really good together, working on some things continuing on for this year. A little bit different rule set for us this year with some design freezes on some different parts and pieces. Nonetheless, we’re focused on some things for this year that we can make some changes on, then of course we’ve got to focus on the Next Gen car in 2022.”

Good to finally see GM teams collaborating. Toyota and Ford have been beating Chevy like a broom for too long.