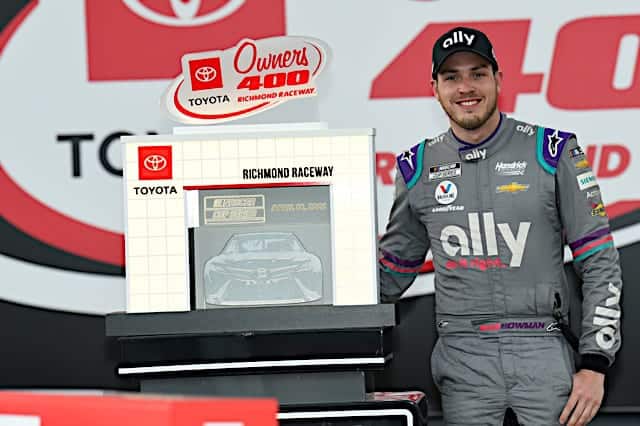 Alex Bowman may not be the next seven-time champion, but Sunday (April 18) he was able to post a NASCAR stat that Jimmie Johnson couldn’t during his final three years in the NASCAR Cup Series: put the No. 48 in the winner’s circle.

It also marked the first win for Bowman since Auto Club Speedway in the second race of 2020, which feels like a mask-free century ago.

Bowman has now won a Cup race in three straight seasons after racing for four years without one. After a difficult finish to last season that culminated with the passing of a longtime crew member and his new bride in a car accident, this one meant a lot more to Bowman and his team than just a trophy and a few statistics.

But stats are what we do here, so let’s dig into a few more notable numbers.

Bowman only led once Sunday, taking the top spot with just 10 laps remaining and holding on for the win. It was the fewest laps led by a Cup winner at Richmond Raceway since April 2013, when Kevin Harvick led only three laps en route to victory.

Conversely, Denny Hamlin watched another mountain of laps led fail to translate into a first-place finish. Hamlin has led 694 of the 2,594 laps run in 2021, including 483 laps the last two weeks at Martinsville Speedway and Richmond. The No. 11 Toyota has one start worse than sixth and one finish worse than fifth in the nine races thus far. Unfortunately, this weekend’s visit to Talladega Superspeedway, where the Big One can grab you at anytime, has the potential to be very detrimental to all of this momentum.

Austin Dillon grabbed 10th in the final rundown on Sunday, marking the fourth time he has finished inside the top 10 in his last five Cup races at the 0.75-mile oval. He also led a lap for the first time since the Daytona 500.

His third-place run in the season opener at Daytona International Speedway was solid but has proven the exception rather than the norm. In the seven races after the 500, he finished better than 12th only once.

While easily in contention for a playoff berth, Dillon hasn’t looked playoff caliber to this point. More consistent performances like the one he gave Sunday could change that.

There is a peculiar statistic that keeps popping up every decade. It happens on occasion that the defending champion fails to reach victory lane for at least the first 10 races of the following season.

With Kyle Busch going winless in 2020 until Texas Motor Speedway last fall, the pattern will continue unless Chase Elliott can triumph this weekend at Talladega Superspeedway.

None of the top five in last weekend’s Camping World Truck Series race started inside the top 10. It marked the second race in a row that this happened and the third such occurrence this year. The top five spots being swept by drivers who started outside of the top 10 doesn’t happen a lot in the Truck Series, and this is the first time it’s ever happened three times in the same year. (The third time was in the Daytona season opener).

Talladega has a reputation of producing different winners throughout its history. 11 drivers have earned their first career Cup win at Talladega, although Ricky Stenhouse Jr. in 2017 is the only one in the past 15 years. Part of that drought can be attributed to the fact that a large percentage of the recent Cup field already has at least one career win, though.

The first-time winner scenario is much more likely to play out on the NASCAR Xfinity Series side at Talladega. Four drivers have earned their first win in the division at Talladega, including two of the past four races there. Justin Haley and Spencer Gallagher recently joined David Ragan and Greg Sacks as Talladega first timers.

Also, only 11 of the 40 drivers who raced in the most recent event at Martinsville have an Xfinity win on their resume. Whether that will change is anyone’s guess, but it’ll be worth keeping an eye on as the field takes to the 33-degree high banks this weekend.